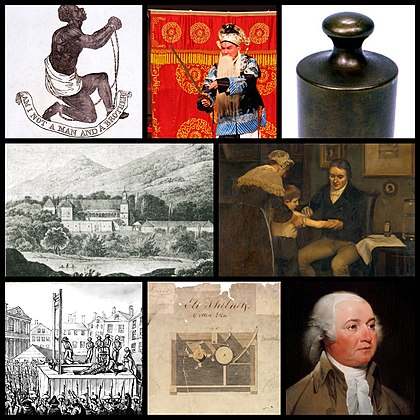 From top left, clockwise: Atlantic slave trade and abolitionism gain momentum over Europe and the Americas, as bans began to be enacted in countries such as Denmark-Norway (1803), the United Kingdom (1807), and Union States of the United States (1808) in the subsequent decade, following movements and upheavals of awareness at this period; Now-iconic Peking opera was conceived after the Four Great Anhui Troupes were brought into the dynasty capital to perform in Beijing, sometime in 1790; The metric system is formally adopted for the first time in France after receiving recommendation from its Commission of Weights and Measures. This set the metric system as a global default of measures and trail-blazed its universal acceptance as the standard of measures, outpacing the imperial system in the process; Smallpox vaccine was created in 1796 by British doctor Edward Jenner; a patent that would unknowingly lead to the eradication of smallpox, directly contributing to the world's first and only successful disease eradication campaign; The United States' very first contested presidential elections took place in 1796, who was eventually won over by John Adams; The cotton gin was first formally patented and came into industrial use in 1793, by American Eli Whitney. The modernized version of the engine paved way for much of the Industrial Revolution and enabled the textile industry to evolve and flourish more, due to its ability to separate cotton; French Revolutionary Wars broke out and culminated at this decade, where events such as the Reign of Terror (pictured) and the establishment of the French First Republic set off frenzied politics, birthing the idea of modern-day political spectrum in the process; Lithography was invented, revolutionising print methods, and increasing pragmatism over information processing.

The 1790s (pronounced "seventeen-nineties") was a decade that began on January 1, 1790, and ended on December 31, 1799. Considered as some of the Industrial Revolution's earlier days, the 1790s called for the start of an anti-imperialist world, as new democracies such as the French First Republic and the United States began flourishing at this era. Revolutions – both political and social – forever transformed global politics and art, as wars such as the French Revolutionary Wars and the American Revolutionary War moulded modern-day concepts of liberalism, partisanship, elections, and the political compass. July 27: Robespierre and Saint-Just are arrested in the town hall

Map of India in 1795, map indicates the political end of the Mogul dynasty in India. 1790s also saw the beginning of the decline of Qing Dynasty.