Decade of the Gregorian calendar (1910-1919)
The examples and perspective in this article deal primarily with Western culture and do not represent a worldwide view of the subject. You may improve this article, discuss the issue on the talk page, or create a new article, as appropriate. (October 2013) (Learn how and when to remove this template message) 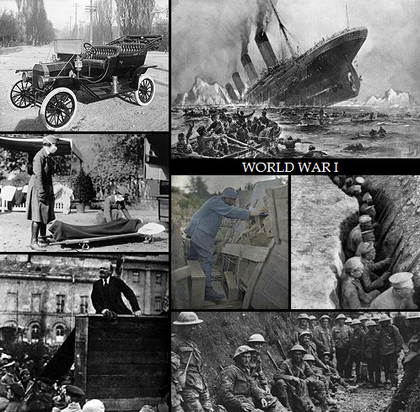 From left, clockwise: The Ford Model T is introduced and becomes widespread; The sinking of the RMS Titanic causes the deaths of nearly 1,500 people and attracts global and historical attention; Title bar: All the events below are part of World War I (1914–1918); French Army lookout at his observation post in 1917; Russian troops awaiting a German attack; A ration party of the Royal Irish Rifles in a communication trench during the Battle of the Somme; Vladimir Lenin addresses a crowd in the midst of the Russian Revolution, beginning in 1917; A flu pandemic in 1918 kills tens of millions worldwide.

The 1910s represented the culmination of European militarism which had its beginnings during the second half of the 19th century. The conservative lifestyles during the first half of the decade, as well as the legacy of military alliances, were forever changed by the assassination, on June 28, 1914, of Archduke Franz Ferdinand, the heir presumptive to the Austro-Hungarian throne. The murder triggered a chain of events in which, within 33 days, World War I broke out in Europe on August 1, 1914. The conflict dragged on until a truce was declared on November 11, 1918, leading to the controversial, one-sided Treaty of Versailles, which was signed on June 28, 1919.

The war's end triggered the abdication of various monarchies and the collapse of four of the last modern empires of Russia, Germany, Ottoman Turkey and Austria-Hungary, with the latter splintered into Austria, Hungary, southern Poland (who acquired most of their land in a war with Soviet Russia), Czechoslovakia and Yugoslavia, as well as the unification of Romania with Transylvania and Moldavia. However, each of these states (with the possible exception of Yugoslavia) had large German and Hungarian minorities, creating some unexpected problems that would be brought to light in the next two decades. (See Dissolution of Austro-Hungarian Empire: Successor states for better description of composition of names of successor countries/states following the splinter.)

The decade was also a period of revolution in many countries. The Portuguese 5 October 1910 revolution, which ended the eight-century long monarchy, spearheaded the trend, followed by the Mexican Revolution in November 1910, which led to the ousting of dictator Porfirio Diaz, developing into a violent civil war that dragged on until mid-1920, not long after a new Mexican Constitution was signed and ratified. The Russian Empire had a similar fate, since its participation in World War I led it to a social, political and economical collapse which made the tsarist autocracy unsustainable and, succeeding the events of 1905, culminated in the Russian Revolution and the establishment of the Russian Soviet Federative Socialist Republic, under the direction of the Bolshevik Party later renamed as Communist Party of the Soviet Union. The Russian Revolution of 1918 , known as the October Revolution, was followed by the Russian Civil War, which dragged on until approximately late 1922. China saw 2,000 years of imperial rule end with the Xinhai Revolution, becoming a nominal republic until Yuan Shikai's failed attempt to restore the monarchy and his death started the Warlord Era in 1916. Much of the music in these years was ballroom-themed. Many of the fashionable restaurants were equipped with dance floors. Prohibition in the United States began January 16, 1919, with the ratification of the Eighteenth Amendment to the U.S. Constitution. Best-selling books of this decade include The Inside of the Cup, Seventeen, Mr. Britling Sees It Through, and The Four Horsemen of the Apocalypse.

During the 1910s, the world population increased from 1.75 to 1.87 billion, with approximately 640 million births and 500 million deaths in total.

Sinking of the Titanic.

Below are the best-selling books in the United States of each year, as determined by The Bookman, a New York-based literary journal (1910 - 1912) and Publishers Weekly (1913 and beyond).[14]

The 1913 Armory Show in New York City was a seminal event in the history of Modern Art. Innovative contemporaneous artists from Europe and the United States exhibited together in a massive group exhibition in New York City, and Chicago.

Other movements and techniques