The 1920 Canton Bulldogs season was the franchise's sixteenth and its first in the American Professional Football Association (APFA), which became the National Football League two years later. Jim Thorpe, the APFA's president, was Canton's coach and a back who played on the team. The Bulldogs entered the season coming off a 9–0–1 performance as Ohio League champions in 1919. The team opened the season with a 48–0 victory over the Pitcairn Quakers, and finished with a 7–4–2 record, taking eighth place in the 14-team APFA. A then-record crowd of 17,000 fans watched Canton's week 12 game against Union AA of Phoenixville.

The 1920 season was Thorpe's last with the Bulldogs. Thorpe, who was of mixed American Indian ancestry, left after the season to organize and play for an all-Native American team in LaRue, Ohio. Cap Edwards replaced Thorpe as the team's coach, and Wilbur Henry, Cub Buck, Harrie Dadmun, Joe Guyon, and Pete Calac were named to the All-Pro list. Three 1920 Bulldogs players—Thorpe, Guyon and Pete Henry—were later elected to the Pro Football Hall of Fame.

Representatives of four Ohio League teams—the Bulldogs, the Cleveland Tigers, the Dayton Triangles, and the Akron Pros—called a meeting on August 20, 1920, to discuss the formation of a new league. At the meeting, they tentatively agreed on a salary cap and pledged not to sign college players or players already under contract with other teams. They also agreed on a name for the circuit: the American Professional Football Conference.[2][3] They then invited other professional teams to a second meeting on September 17. At that meeting, held at Bulldogs owner Ralph Hay's Hupmobile showroom in Canton, representatives of the Rock Island Independents, the Muncie Flyers, the Decatur Staleys, the Racine Cardinals, the Massillon Tigers, the Chicago Cardinals, and the Hammond Pros agreed to join the league. Representatives of the Buffalo All-Americans and Rochester Jeffersons could not attend the meeting, but sent letters to Hay asking to be included in the league.[4] Team representatives changed the league's name slightly to the American Professional Football Association and elected officers, installing Jim Thorpe as president.[4][5][6] Under the new league structure, teams created their schedules dynamically as the season progressed,[7][8] and representatives of each team voted to determine the winner of the APFA trophy.[9] 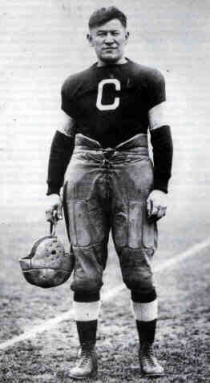 The Bulldogs opened the 1920 season against the Pitcairn Quakers. The team got out to a quick lead and was never in danger, scoring 34 points in the first quarter as back Joe Guyon rushed for three touchdowns, tackle Pete Henry caught a 15-yard touchdown pass from back Tex Grigg, and back Johnny Hendren returned an interception for a touchdown.[11] The Bulldogs were only forced to punt once in the game, and did not attempt to score in the second and third quarters because of the large lead.[11] In the fourth quarter, however, end Bunny Corcoran caught a 35-yard touchdown pass from Guyon, and back Ike Martin ran for a one-yard touchdown.[citation needed] The final score was 48–0, and Guyon was the offensive star.[11]

The Bulldogs were scheduled to play their second game against the Rochester Jeffersons, but faced the Toledo Maroons after that match was cancelled.[10] For the second game in a row the Bulldogs scored over 40 points in a shutout as Martin and Guyon dominated on offense.[12] Martin scored the first touchdown of the game with a run in the first quarter.[citation needed] In the second quarter, Hendren scored a rushing touchdown, and end Tom Whelan caught a touchdown pass from Grigg.[citation needed] In the third quarter, Martin caught a touchdown pass from Grigg, and Grigg rushed for another.[citation needed] The Bulldogs' final score was a rushing touchdown from back Pete Calac in the fourth quarter.[citation needed] The final score was 48–0.[12] The Maroons never got close to scoring and did not make a single a first down.[12]

The Bulldogs next faced the Cleveland Tigers, their first APFA opponent, and won 7–0 before a crowd of 7,000 people.[citation needed] Despite the Bulldogs' 15 first downs, the only score of the game came on Martin's 7-yard touchdown run in the first quarter.[13] Thorpe made his season debut in the game, coming in as a substitute in the fourth quarter.[13]

The Bulldogs' next opponent was the Akron Pros, who were undefeated at the time and were gaining attention around the league.[15] The game was the first of a two-game series between the Bulldogs and Pros, considered to be two of the best teams in the country.[16] In the first quarter, after an exchange of punts, Pros tackle Charlie Copley kicked a 38-yard field goal.[citation needed] On a Bulldog possession at midfield, a Gilroy pass was tipped by the Pros' Copley and Bob Nash.[16] Pros tackle Pike Johnson caught the ball before it landed and ran 55 yards for a touchdown.[citation needed] In the third quarter, Jim Thorpe came into the game but could not get the Bulldogs back into the game.[16]

In week nine, the Bulldogs played the Buffalo All-Americans, who were undefeated at the time. Thorpe started the game but came out at halftime because he believed it would end in a tie.[17] Both teams were slowed by a muddy field, and the football became soggy after three quarters.[17] The lone score of the game came with under four minutes to play: a field goal from the Bulldogs' Feeney.[17] The game was the only loss of the season for the All-Americans.

In week ten, the Bulldogs played the Pros for the second time in the season.[15] In the first quarter, a fumbled punt by the Bulldogs gave the Pros the ball at their 32-yard line.[15][18] On the ensuing drive, the Pros passed for the game's lone score, a touchdown from King to Nash.[18] The Bulldogs lost 7–0 in the first professional game played on Thanksgiving Day, which launched a yearly tradition.[18][19]

The following week, the Bulldogs played their second game against the All-Americans, losing 7–3.[20] The Bulldogs did not get a first down or complete a pass during the game,[21] but Thorpe kicked a field goal in the third quarter after a fumble recovery for the team's only score.[20] In the fourth quarter, All-Americans tackle Youngstrom blocked a Thorpe punt and returned it for a touchdown.[21] The Sunday Chronicle named Thorpe, Henry and Lowe as the Bulldogs' stars, while Anderson, Youngstrom, and Miller were the standouts for the All-Americans.[20]

The following day, the Bulldogs played the non-APFA Washington Glee Club.[22] Coming into the game, the Glee Club allowed just seven points all season.[22] The teams tied 0–0 before a crowd of 3,000 people.[citation needed]

Week 12: at Union AA of Phoenixville

Awarded the Brunswick-Balke Collender Cup and named APFA Champions.
Note: Tie games were not officially counted in the standings until 1972.

Hurt by losses to the Akron Pros and Buffalo All-Americans, the Bulldogs did not contend for the APFA trophy in 1920. Following the season, Thorpe left to start a new club composed of Native Americans in LaRue, Ohio[25] and Cap Edwards took over as head coach. Sportswriter Bruce Copeland compiled the All-Pro list for the 1920 season, naming the Bulldogs' Wilbur Henry to the first team. Cub Buck, Harry Dadmun, and Joe Guyon were on the second team, and Pete Calac was on the third team.[29] Three men who played for the 1920 Canton Bulldogs were later inducted into the Pro Football Hall of Fame: Thorpe and Pete Henry in 1963 and Guyon in 1966.[30][31][32]