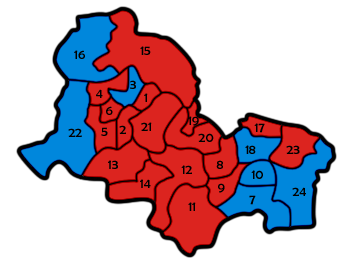 Map of the results for the 1978 Wigan council election. Labour in red and Conservatives in blue.

Elections to Wigan Council were held on 4 May 1978, with one third of the council up for election as well as vacancies in Ward 2 and 17. Previous to the election, a Labour councillor in Ward 9 defected to become an Independent Labour, reducing Labour's majority to 38. This seat was up for vote and became the only Labour gain of the night, as they suffered five losses to the Conservatives, and their majority reduced to 30 - half of what it was in 1973. The election seen a first of all wards being contested, with turnout rising marginally to 34.7%.[1]