In 2004 there were 78 picks to be drafted between 16 teams in the national draft. Richmond received the first pick in the national draft after finishing on the bottom of the ladder during the 2004 AFL season. Three teams were allocated priority draft picks for winning 5 or less games in the previous season, Richmond, Hawthorn and Western Bulldogs.[1] Carlton's two-year ban from the first and second rounds of the AFL draft expired in 2004 and they returned to the early part of the draft, with selections 9 and 25.[2] As it had traded away its first and second round draft picks in 2001, effectively the Blues' first and second round draft picks were its first since 2000. They finished the 2004 season 11th with 10 wins and 12 losses, too high to be eligible for a priority draft pick.

In alphabetical order of new clubs [3] 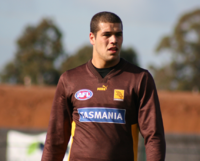 In alphabetical order of professional clubs. This list contains 2004-listed rookies who were elevated in the off-season; it does not detail the rookie draft which took place in the 2004/05 off-season.