This article relies too much on references to primary sources. Please improve this by adding secondary or tertiary sources. (July 2009) (Learn how and when to remove this template message)

The 2009 Summer Deaflympics (Chinese: 2009年夏季聽障奧林匹克運動會; pinyin: 2009 Nián Xiàjì tīngzhàng àolínpǐkè yùndònghuì), officially known as the XXI Summer Deaflympic Games and commonly known as Taipei 2009, is an international multi-sport event that was celebrated from 5 to 15 September 2009 in Taipei, Taiwan (Republic of China). It is the third Summer Deaflympics to be held in the Asia-Pacific region. Judo, karate, and taekwondo have been recognized as new summer disciplines in the Deaflympics sports competition program.

On November 24, 2002, ICSD President John Lovett arrived in Taipei, and visited all recommended venues and facilities during the one-week stay. The Chinese Taipei Sport Association for the Deaf gave Mr. Lovett multimedia presentations and made arrangements for him to meet with President Chen Shui-bian, Chinese Taipei Olympic Committee Chairman Huang Ta-chou, and other officials.[3]

Taipei was chosen to host the 21st Summer Deaflympics in a vote held at the 38th ICSD session, finishing ahead of Athens, Greece. Below was the vote count that occurred on February 28, 2003, in Sundsvall, Sweden:[4]

Preparation for the Games started in 2005, with an estimated total budget of NT$ 4.6 billion for the required infrastructure. The construction of the Taipei Stadium alone costs around NT$3 billion.[5] The funding is provided by the Taipei City Government and the Sports Affairs Council. The main stadium Taipei Stadium was completed on June 15, 2009, and was certified as a Class 1 Athletics Facility by the IAAF.[6] Besides opening/closing ceremonies and athletics, the football finals were also held at the Taipei Stadium.

The Organising Committee has designated August 2009 as the "Taipei Deaflympics Arts Month", during which famous artists and art groups are invited to perform at the Taipei Arena, such as A-mei, Blue Man Group, Dynamic Yunnan, and Minghuayuan.[8] The "Taipei International Deaf Culture Fair" was also held, with a series of exhibitions and activities that promoted understanding of the Deaf culture. 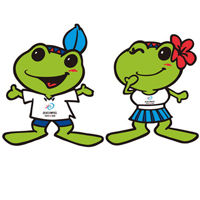 The banyan leaf and azalea flower worn by the mascots are Taipei's official tree and flower.

The emblem comes from the shape of the Chinese character for north (Chinese: 北; pinyin: běi; Wade–Giles: pei3), representing the host city Taipei (Chinese: 臺北; pinyin: Táiběi; Wade–Giles: Tʻai²-pei³), with an ear representing the Deaflympics, and a figure as the main body representing the athletes. The design uses the blue, white and red color scheme of the national flag and simple, flowing calligraphic lines, evoking the "image of running man". It symbolizes the courageous spirits of the athletes as they excel and meet the challenges as well as the vitality of Taiwan.

The 2009 Summer Deaflympics motto is "Power in me!". The Chinese version is "無聲的力量" (literally, "The Power of Silence").

The Games' mascots are one male and one female Taipei green treefrogs. The mascots have their arms wide open, in a welcoming pose that looks like the Chinese character "北", which represents the host city Taipei.

The theme song is "Dreams You Can Hear" (Chinese: 聽得見的夢想), performed by A-mei.[11]

The various sports offered at the 2009 Summer Deaflympics were held in 20 disciplines, including 15 individual sports and 5 team sports:[12]

The Organising Committee of the 21st Summer Deaflympics recruited acclaimed Taiwanese playwright and theatre director Dr. Stan Lai as the Games' Art Director, and to orchestrate the opening and closing ceremonies.[14][15]

According to Stan Lai, ceremony general director, the opening of the Deaflympics will be a "memorable event that will call forth the beauty of the human heart and reach out to the deaf community." It will be divided into 12 acts, including a performance titled "Impossible Dream" by renowned Taiwanese model Patina Lin. Completely covered in body paint, Lin will float across a 50-meter projection screen to create the illusion of a goddess walking through air and water. She will also perform along with children from schools for the hearing-impaired, using sign language to express the message of "Power in Me," Lai said.[16]

World-renowned deaf percussionist Evelyn Glennie has been invited to perform at the opening ceremony, as well as the local drumming group U-Theatre, and more than 80 children from schools for the hearing-impaired in Taipei and Taichung cities, according to Lai.[16]

The team from the People's Republic of China did not attend the opening ceremony. Neither side has officially given the reason, although most news sites are attributing it to the Dalai Lama's recent trip to Taiwan.[17][18][19][20] The People's Republic of China had previously not attended the opening of the World Games which was held in Kaohsiung earlier in the year.[21] Nonetheless, China has sent 63 hearing impaired dancers from the Mainland China to perform the "1,000 hand Bodhisattva" at the ceremony.[22]

In a creative move, a banquet where 12 typical Taiwanese dishes were served at 350 tables dominated the closing ceremony for the 11-day event in Taipei. The parades, fireworks and arts performances usually seen at such events were also present, but played a secondary role. The menu for the banquet included peanuts from Yunlin County, beef noodles, pineapple cakes, highland tea, and mango shaved ice, accompanied by pearl milk tea and vinegar-based fruit drinks. Some of the foods had been seen at the September 5th opening in a plastic and cloth version during a show representing the best of Taiwanese cuisine and culture. While the athletes tucked into the local delicacies, the 14,000 members of the public were able to exchange their tickets for food valued at NT$200 per person.

Performances including Taiwanese opera from the famous Ming Hwa Yuan troupe, lion dances, drums, and three songs, including the closing theme song of the 2009 Deaflympics, from Aaron Kwok, a pop star from Hong Kong. He said with passion, "I witnessed a successful closing ceremony tonight. Just like I've said during the performance, the Deaflympics touches our heart and Taipei has touched the world."[23] A movie was also presented depicting the athletic highlights of the 2009 Summer Deaflympics.

At the end, the flag was passed on to the Greek capital of Athens, the host of the 2013 Summer Deaflympics scheduled for 2013. The fourth Deaflympics in the Asia-Pacific region will also be preserved in history as the best ever for host Chinese Taipei, which won 11 gold medals, 11 silvers and 11 bronzes. The country placed fifth for the number of medals won, with Russia coming first after collecting 29 golds, 40 silvers and 28 bronzes. Ukraine came second, South Korea third, and the People's Republic of China fourth.

On the political side of the sporting event, the People's Republic of China announced earlier it would be present for the closing ceremony, after having missed the opening, widely thought to have been planned that way to avoid the presence of President Ma Ying-jeou. The team's deputy leader, Zhao Sujing, told reporters that the 78 Chinese participants had to come together in Beijing from all parts of China first, and that problems with airline ticketing had caused them to miss earlier flights to Taipei. However, more than ten athletes were to be present in Taiwan to participate in the closing ceremony. The People's Republic of China won 12 golds, nine silver and 17 bronze medals, or double its amount at the Melbourne Deaflympics four years ago. Praising the organization, International Committee of Sports for the Deaf President Donalda Ammons used sign language to say "the Taipei Deaflympics were the best ever."

She received the keys to Taipei and the honorary citizenship of the city from the hands of Mayor of Taipei Hau Lung-pin. He bestowed similar honors on other ICSD officials, including executive member and China team leader Yang Yang, the first-ever Chinese citizen to receive honorary citizenship in Taipei.

Overall, most regarded the ceremony as a success. The only "unwelcome intrusion to an otherwise perfect ending was the deportation of a Spanish athlete for alleged sexual harassment of a volunteer."[24]

In the following calendar for the 2009 Summer Deaflympics, each blue box represents an event competition. The yellow boxes represent days during which medal-awarding finals for a sport are held. The number in each yellow box represents the number of finals that are contested on that day.[25][26]*