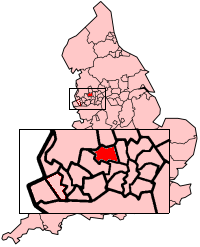 The 2019 Bolton Metropolitan Borough Council election took place on 2 May 2019 to elect members of Bolton Council in Greater Manchester, England.[1][2][3] This was on the same day as other local elections. The Labour Party, which had run the council since 2006 and had maintained a majority since 2011, lost overall control of the Council.

After the election, the total composition of the council was as follows:

The Conservatives formed an agreement with all the other opposition parties, the Liberal Democrats, Farnworth and Kearsley First, UKIP and Horwich and Blackrod First in order to form a minority administration.[4][5] For the first time since the period between 2004 and 2006, the Labour Party went into opposition. This was also the first time in history at Bolton Council that the party with the largest number of seats was not in charge of running the council.

Prior to the election the composition of the council was:

After the election the composition of the council was:

Winning candidates are highlighted in bold.

Tonge with The Haulgh ward