Lutetia (minor planet designation: 21 Lutetia) is a large asteroid in the asteroid belt of an unusual spectral type. It measures about 100 kilometers in diameter (120 km along its major axis). It was discovered in 1852 by Hermann Goldschmidt, and is named after Lutetia, the Latin name of Paris.

Lutetia has an irregular shape and is heavily cratered, with the largest impact crater reaching 45 km in diameter. The surface is geologically heterogeneous and is intersected by a system of grooves and scarps, which are thought to be fractures. It has a high average density, meaning that it is made of metal-rich rock.

Lutetia was discovered on 15 November 1852, by Hermann Goldschmidt from the balcony of his apartment in Paris.[9][10] A preliminary orbit for the asteroid was computed in November–December 1852 by German astronomer Georg Rümker and others.[11] In 1903, it was photographed at opposition by Edward Pickering at Harvard College Observatory. He computed an opposition magnitude of 10.8.[12]

There have been two reported stellar occultations by Lutetia, observed from Malta in 1997 and Australia in 2003, with only one chord each, roughly agreeing with IRAS measurements.[citation needed]

On 10 July 2010, the European Rosetta space probe flew by Lutetia at a minimum distance of 3168 ± 7.5 km at a velocity of 15 kilometres per second on its way to the comet 67P/Churyumov-Gerasimenko.[4] The flyby provided images of up to 60 meters per pixel resolution and covered about 50% of the surface, mostly in the northern hemisphere.[3][8] The 462 images were obtained in 21 narrow- and broad-band filters extending from 0.24 to 1 μm.[8] Lutetia was also observed by the visible–near-infrared imaging spectrometer VIRTIS, and measurements of the magnetic field and plasma environment were taken as well.[3][8]

Lutetia orbits the Sun at the distance of approximately 2.4 AU in the inner asteroid belt. Its orbit lies almost in the plane of ecliptic and is moderately eccentric. The orbital period of Lutetia is 3.8 years.[13]

The composition of Lutetia has puzzled astronomers for some time. While classified among the M-type asteroids,[2] most of which are metallic, Lutetia is one of the anomalous members that do not display much evidence of metal on their surface. Indeed, there were various indications of a non-metallic surface: a flat, low frequency spectrum similar to that of carbonaceous chondrites and C-type asteroids and not at all like that of metallic meteorites,[15] a low radar albedo unlike the high albedos of strongly metallic asteroids like 16 Psyche,[7] evidence of hydrated materials on its surface,[16] abundant silicates,[17] and a thicker regolith than most asteroids.[18]

The Rosetta probe actually found that the asteroid has a moderately red spectrum in the visible light and essentially flat spectrum in the near infrared. No absorption features were detected in the range covered by observations, 0.4–3.5 μm. Thus previous reports of hydrated minerals and organic compounds on the surface of Lutetia have been disproven. The surface also does not contain any olivine. Together with the high density of Lutetia these results indicate that it is either made of the enstatite chondrite material or may be related to metal-rich and water-poor carbonaceous chondrite of classes like CB, CH, or CR.[5][19]

Rosetta observations revealed that the surface of Lutetia is covered with a regolith made of loosely aggregated dust particles 50–100 μm in size. It is estimated to be 3 km thick and may be responsible for the softened outlines of many of the larger craters.[3][8] The Rosetta probe's photographs confirmed the results of a 2003 lightcurve analysis that described Lutetia as a rough sphere with "sharp and irregular shape features".[20] A study from 2004–2009 proposed that Lutetia has a non-convex shape, likely because of a large crater, Suspicio Crater.[21] It is not yet clear whether Rosetta's findings support this claim.

The analysis of Rosetta images in combination with photometric light curves yielded the position of the north rotational pole of Lutetia: RA = 51.8°±0.4°, Dec = +10.8°±0.4°. This gives an axial tilt of 96° (retrograde rotator), meaning that the axis of rotation is approximately parallel to the ecliptic, similar to the planet Uranus.[3]

The surface of Lutetia is covered by numerous impact craters and intersected by fractures, scarps and grooves thought to be surface manifestations of internal fractures. On the imaged hemisphere of the asteroid there are a total of 350 craters with diameters ranging from 600 m to 55 km. The most heavily cratered surfaces (in Achaia region) have a crater retention age of about 3.6 ± 0.1 billion years.[3]

The surface of Lutetia has been divided into seven regions based on their geology. They are Baetica (Bt), Achaia (AC), Etruria (Et), Narbonensis (Nb), Noricum (Nr), Pannonia (Pa), and Raetia (Ra). The Baetica region is situated around the north pole (in the center of the image) and includes a cluster of impact craters 21 km in diameter as well as their impact deposits. It is the youngest surface unit on Lutetia. Baetica is covered by a smooth ejecta blanket approximately 600 m thick that has partially buried older craters. Other surface features include landslides, gravitational taluses and ejecta blocks up to 300 m in size. The landslides and corresponding rock outcrops are correlated with variations of albedo, being generally brighter.[3]

The two oldest regions are Achaia and Noricum. The former is a remarkably flat area with a lot of impact craters. The Narbonensis region coincides with the largest impact crater on Lutetia—Massilia. It includes a number of smaller units and is modified by pit chains and grooves formed at a later epoch. Other two regions—Pannonia and Raetia are also likely to be large impact craters. The last Noricum region is intersected by a prominent groove 10 km in length and about 100 m deep.[3]

The numerical simulations showed that even the impact that produced the largest crater on Lutetia, which is 45 km in diameter, seriously fractured but did not shatter the asteroid. So, Lutetia has likely survived intact from the beginning of the Solar System. The existence of linear fractures and the impact crater morphology also indicate that the interior of this asteroid has a considerable strength and is not a rubble pile like many smaller asteroids. Taken together, these facts suggest that Lutetia should be classified as a primordial planetesimal.[3]

Studies of patterns of fractures on Lutetia lead astronomers to think that there is a ~45 kilometer impact crater on the southern side of Lutetia, named Suspicio Crater, but because Rosetta only observed Lutetia's northern part, it is not known for certain what it looks like, or if it exists at all.[22] 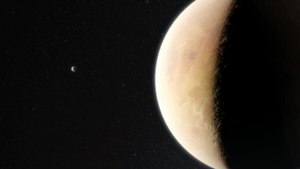 This animation is an artist's impression of a possible scenario to explain how Lutetia came to now be located in the asteroid belt.

The composition of Lutetia suggests that it formed in the inner Solar System, among the terrestrial planets, and was ejected into the asteroid belt through an interaction with one of them.[24]