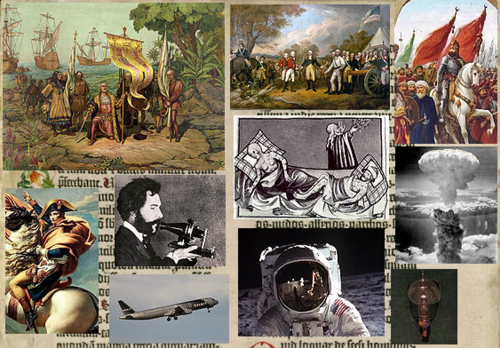 From left, clockwise: in 1492, Christopher Columbus reaches North America, opening the European colonization of the Americas; the American Revolution, one of the late 1700s Enlightenment-inspired Atlantic Revolutions; the Ottoman conquest of Constantinople; the Atomic Bomb from World War II; an alternate source of light, the light bulb; for the first time, a human being sets foot on the moon in 1969 during the Apollo 11 moon mission; airplanes enable widespread air travel; Napoleon Bonaparte, in the early 19th century, affects France and Europe with expansionism, modernization, and nationalism; Alexander Graham Bell's telephone; in 1348, the Black Death kills in just two years over 100 million people worldwide, and over half of Europe. (Background: An excerpt from the Gutenberg Bible, the first major book printed in the West using movable type, in the 1450s)

It encompassed the High and Late Middle Ages of the Old World, the Islamic Golden Age and the period of Renaissance, followed by the Early Modern period, characterized by the Wars of Religion in Europe, the Age of Enlightenment, the Age of Discovery and the colonial period. Its final two centuries coincide with Modern history, characterized by industrialization, the rise of nation states, the rapid development of science, widespread education, and universal health care and vaccinations in the Western world. The 20th century saw increasing globalization, most notably the two World Wars and the subsequent formation of the United Nations. 20th-century technology includes powered flight, television and semiconductor technology, including integrated circuits. The term "Great Divergence" was coined to refer the unprecedented cultural and political ascent of the Western world in the second half of the millennium, emerging by the 18th century as the most powerful and wealthy world civilization, having eclipsed Qing China and the Islamic world. This allowed the colonization by European countries of much of the world during this millennium, including the Americas, Africa, Oceania, and South and Southeast Asia.

World population grew without precedent over the millennium, from about 310 million in 1000 to about 6 billion in 2000. The population growth rate increased dramatically during this time; world population approximately doubled to 600 million by 1700, and doubled more than three more times by 2000, ultimately reaching about 1.8% per year in the second half of the 20th century.

This section may require cleanup to meet Wikipedia's quality standards. The specific problem is: sort, arrange, comment. Please help improve this section if you can. (September 2018) (Learn how and when to remove this template message)

In the late 1990s, there was a dispute as to whether the millennium should be taken to end on December 31, 1999, or December 31, 2000. Stephen Jay Gould at the time argued there is no objective way of deciding this question.[4] Associated Press reported that the third millennium began on 1 January 2001, but also reported that celebrations in the US were generally more subdued at the beginning of 2001, compared to the beginning of 2000.[5] Many public celebrations for the end of the second millennium were held on December 31, 1999 – January 1, 2000[6]—with a few people marking the end of the millennium a year later.