61 Mechanised Battalion Group was a unit of the South African Infantry Corps; although it was classed as mechanized infantry, it was a combined arms force consisting of infantry, armour and artillery.

General Constand Viljoen, Chief of the Army, formulated a plan in 1978 to introduce a mechanized combat group to Ovamboland in the then South West Africa, to conduct operations against SWAPO. Combat Group Juliet was then formed under the command of Commandant Frank Bestbier.

The Battle Group first saw action in Operation Reindeer in early May 1978, launching an attack on SWAPO’s Western Front headquarters and logistics base, at Chetequera, 15 km north of the South West African border, with a mechanized assault force.[1]: 76  This attack formed part of Operation Reindeer during which paratroopers attacked a separate target at Cassinga, some 300 km into Angola. After Operation Reindeer it was decided to establish a permanent conventional mechanized combat unit in the operational area and Commandant Johann Dippenaar was appointed to set up this unit.

By January 1979, the Battle Group was renamed 61 Mechanised Battalion and became part of the regular order of battle. 61 Mech served for over a decade in the territory fighting both a guerrilla war against the South-West Africa People's Organisation, as well as taking part in conventional operations against Cuban and Angolan forces.[2]

A tactical headquarters for 61 Mech was initially established at Otavi but during April 1979 this was moved to Tsumeb. 61 Mech was eventually resettled at Omuthiya, with a base headquarters in Tsumeb.

61 Mech was primarily involved in these operations.

61 Mech was part of the Sector 10 response to the Cuban buildup and SWAPO incursions, known as the Merlyn Forces in 1989 South West Africa

During September 1991 61 Mech Bn Gp, which was based at Rooikop in Namibia, resettled at the Army Battle School in Lohatla, South Africa. 61 Mech remained part of C Army’s Reserve, under operational command of 60 Brigade HQ and administratively supported by the Army Battle School. During this time, C Army amended the organisation of the Battle School to execute two functions concurrently:

61 Mech was primarily involved in these operations.

By 2005, 61 Mech was disbanded and its infantry elements merged into 8 South African Infantry Battalion at Upington after moving from Lohatla. The Armour and Artillery components were merged into other existing regular units of their respective corps.

61 Mech was organised along the following lines:

61 Mech was primarily tasked as the Army's Immediate Response Unit, due to its versatility. 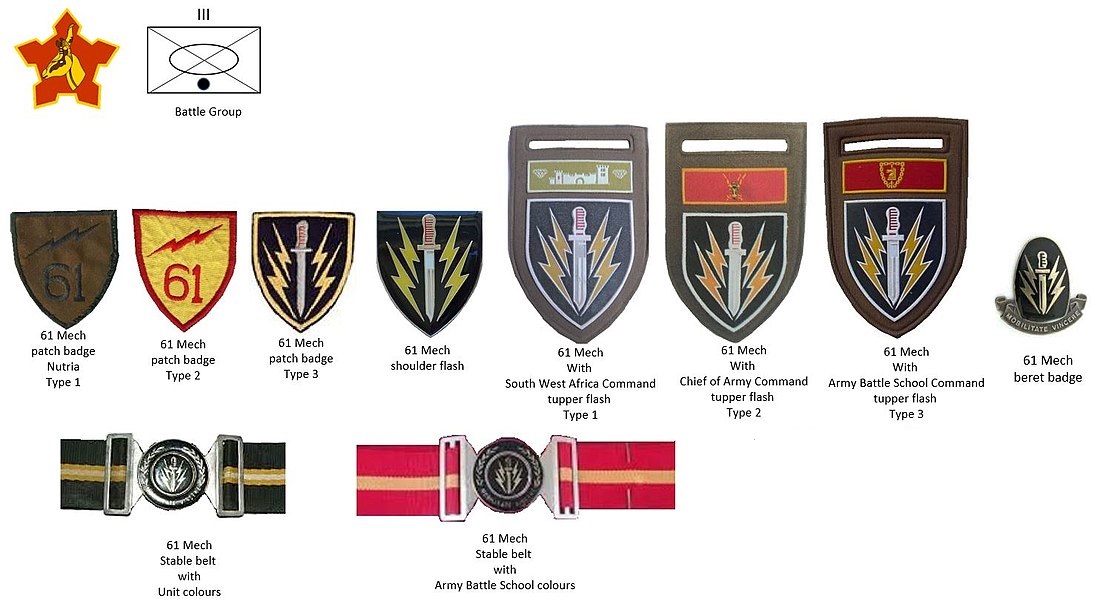 61 Mech awarded a small badge called the Operational Badge for those in or attached to the unit who deployed with the unit on operational duties.[3]: 14  The badge had a yellow backing and was awarded initially only for cross border operations into Angola.[3]: 14  A subsequent version with a green backing was suggested which was to be for internal duties. This version was never authorised and the yellow badge was awarded for all operational deployments. The badge consisted of a dagger with three diagonal lightning bolts in red across it. A subdued version was produced for wear on nutria (brown's) uniforms. With the introduction of camouflage, a new version was produced on green thatching.

This knife point always faced the heart of the wearer.[4]

Each company or element in the Battalion (group) had its own flag and identifying badge.