A.N.T. Farm is an American teen sitcom which originally aired on Disney Channel from May 6, 2011 to March 21, 2014.[1] It first aired on May 6, 2011, as a special one-episode preview and continued as a regular series starting on June 17, 2011.[2] After airing as the preview of the series, the pilot episode "transplANTed" later re-aired after the series finale of The Suite Life on Deck.[3] The series was created by Dan Signer, a former writer and co-executive producer of The Suite Life on Deck and creator of the YTV series Mr. Young. In mid-November 2010, Disney Channel greenlit the series,[4] with production beginning in early 2011.[5] The first promo was released during the premiere of Lemonade Mouth.

The series stars China Anne McClain as Chyna Parks, an 11-year-old musical prodigy who is the newest member in the Advanced Natural Talent (A.N.T.) program, a gifted program at Webster High School in San Francisco that allows gifted middle school students to skip middle school and go immediately to high school. Sierra McCormick, Jake Short, Stefanie Scott, Carlon Jeffery, and Aedin Mincks also star. The series was successful, as it was the most popular series on television among children in the age ranges 6 to 11 and 9 to 13. The A.N.T. Farm soundtrack was released on October 11, 2011 and was successful, spending five weeks on the Billboard kids chart, peaked at number 29 on the US Billboard 200, and peaked at number 2 on the US Top Soundtracks.[6][7]

A.N.T. Farm revolves around Chyna Parks (China Anne McClain), an 11-year-old musical prodigy, who has just become the newest student in the Advanced Natural Talents (A.N.T.) program at Webster High School in San Francisco, California for gifted middle schoolers. On her first day, she meets Gibson (Zach Steel), the goofy counselor and tutor of the A.N.T. Farm, as well as Olive Doyle (Sierra McCormick), a girl with an eidetic memory, and Fletcher Quimby (Jake Short), an artistic genius, but otherwise quite dim, who falls in love with Chyna when they first meet. After becoming friends, the three proceed to go on multiple adventures, using their talents to their advantage.

The school's it girl, Lexi Reed (Stefanie Scott), is one of the teenagers who thinks that the A.N.T.s don't belong at Webster High School and views them as little kids. She proceeds to bully Chyna, thinking of her as competition in being the star of the school. Chyna's older brother, Cameron (Carlon Jeffery), attempts to avoid Chyna in high school as much as he can, afraid she will be an embarrassment to him. Lexi's best friend Paisley (Allie DeBerry) and Angus (Aedin Mincks), a computer prodigy who harbors a crush on Olive, are major recurring roles in the series.

The third season takes place at a boarding school called Z-Tech after all of the A.N.T.s are accepted as students. The school is run by a big technology company, Z-Tech, owned by Zoltan Grundy (Dominic Burgess). The series ends with Fletcher winning an arts fellowship in New York City and moving there to follow his dreams. 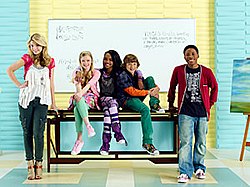 The season 1 and 2 main characters of A.N.T. Farm: (from left to right) Lexi Reed, Olive Doyle, Chyna Parks, Fletcher Quimby, and Cameron Parks. Can also use cursor to identify.

Disney Channel announced on November 11, 2010 that they had green-lit the show for production, which began in early 2011.[13] The show was first conceived when Dan Signer, creator of the show, saw China Anne McClain. "The girl had so much confidence. She can nail a joke. She can sing. She can play instruments. It's like China was some sort of child prodigy [...] And that's when it hit me: Why not build a show around a child prodigy? Someone who's got all of this natural talent & ability, but is still challenged when she's sent off to high school at the age of 11?" Signer said in an interview.[14] After the first few episodes of the show were shown, Disney Channel bumped up their order of episodes for the show from 13 episodes to 26 episodes for the first season.[14] On November 30, 2011, it was announced the series was renewed for a second season.[15] On October 2, 2012, it was announced the series was renewed for a third and final season.[16]

In 2009, China Anne McClain booked the starring role as Janet in the Disney Channel pilot Jack and Janet Save the Planet alongside future co-stars Sierra McCormick and Jake Short. The pilot was not picked up and never aired. After the pilot was not picked up, Dan Signer began creating another show tailor-made for McClain and cast her as the lead.[17][18][19] Sierra McCormick was cast after an audition where she continually talked about tigers. Dan Signer stated "And as I heard her continually talking about tigers, I thought 'That's just how Olive would sound,' because Olive is a fast talking, intelligent student whose talent is memory, which is how Sierra got that part." Jake Short was cast after Signer found him to be likable as an artist during his audition.[14] Jake Short was the last of the three core characters to be cast. Caroline Sunshine was originally cast as Lexi and Stefanie Scott as the role of Tinka Hessenheffer in Shake It Up!, but Dan Signer decided that Sunshine would be better as Tinka and Scott as Lexi, so the two switched roles. Sunshine, however, would later guest star in the episode "some enchANTed evening".

The episode "The PhANTom Locker" was the most watched episode of the series, scoring 4.6 million viewers,[28] until August 5, 2011, when an unnamed episode earned 4.9 million viewers right after the Phineas and Ferb the Movie: Across the 2nd dimension.[29] It did better than its lead-in Wizards of Waverly Place, which earned 4.1 million viewers.[28]