Almost immediately after its formation, the conference experienced a shake-up in its membership. Oklahoma City departed to become a charter member of the Midwestern City Conference (known today as the Horizon League), while UTPA returned to D-I independent status— both had only played a single season in the infant league. The TAAC was quick to replace the outgoing members with Northwestern State University and the University of Arkansas at Little Rock, along with Georgia Southern University in 1980, but this instability would prove to be a trend through the coming years— over the next 20 years, the conference would accept 16 new members, with many of these leaving after only playing a handful of seasons. 1982 saw the departure of another charter member, Northeast Louisiana, to the Southland Conference. Additionally, it saw the arrival of Nicholls State University, who was originally planned to join the TAAC as a full member. However, due to an oversight by the NCAA, adding in a new program who had not competed in Division I for at least 5 years would result in the offending conference forfeiting their automatic bid to the NCAA Division I men's basketball tournament. To get around this, the TAAC announced that Nicholls State would compete as a provisional member, ineligible for the men's basketball tournament until it completed its D-I transition in 1985.[4] However, it, aloing with Northwestern State, left the conference in 1984 to join the Gulf Star Conference instead.

The turn of the millennium saw another charter member in Centenary depart in 1999 for the Mid-Continent Conference (now the Summit League); the league was able to offset this with the addition of Belmont University in 2001. Around this same time, the conference sought to rebrand itself, changing its name from the Trans America Athletic Conference to the Atlantic Sun Conference. The newly rebranded A-Sun continued to expand into the 2000s, adding Gardner-Webb University in 2002, Lipscomb University in 2003, East Tennessee State University, Kennesaw State University, and the University of North Florida in 2005, and Florida Gulf Coast University & the University of South Carolina Upstate in 2007. It also lost its fair share of members as well— largely some of the aforementioned members that had been added during the 90s, such as FIU, Florida Atlantic, and Troy to the Sun Belt, Georgia State to the Colonial Athletic Association, and UCF to Conference USA, but it also saw the departure of Samford to the Ohio Valley Conference, leaving Mercer as the only remaining charter member.

The start of the 2010s gave the A-Sun a bit of a reprieve from conference realignment, losing only Campbell and Belmont in 2011 and 2012 to the Big South and OVC, respectively, and only adding recent D-I upgrader Northern Kentucky University in 2012. 2014 saw the departure of its final charter member, Mercer, to the Southern Conference in 2014; however, the Bears continued to compete in the ASUN as an affiliate for beach volleyball, and added men's lacrosse to its ASUN membership in 2022. The A-Sun continued to expand and contract slowly through the mid 2010s, losing only Northern Kentucky and East Tennessee State (along with Mercer), and only adding the New Jersey Institute of Technology in 2015.

However, arguably its biggest move in recent years was the announcement that the conference would be adding the University of Central Arkansas, Eastern Kentucky University, and former member Jacksonville State University, as incoming members on January 29, 2021, with the intent of sponsoring football in the Football Championship Subdivision (FCS) in 2022.[10] However, with these three schools joining in 2021, the league partnered with another conference beginning to sponsor football also in 2022, the Western Athletic Conference (WAC), to allow the three teams to join the WAC as football affiliates for 2021, branding it interchangeably as the "ASUN–WAC Challenge" and "WAC–ASUN Challenge"; the two leagues will receive a combined bid to the FCS playoffs.[11][12]

As soon as it was announced, however, the football league was thrown into jeopardy, as Jacksonville State announced it would be leaving once again in 2023 for Conference USA, an FBS conference. Liberty was also invited to C-USA for 2023, but had already competed as an FBS independent for some time and was not included in the ASUN's new football league.[13] With the WAC also losing Sam Houston, another football-sponsoring school, to C-USA, the two conferences announced they would be renewing their alliance for the 2022 season.[14] On September 17, 2021, the ASUN announced Austin Peay State University, a football-sponsoring school, as a new member for the 2022–23 season.[15] In May 2022, local media in Charlotte, North Carolina, also reported that Queens University of Charlotte would start a transition from the Division II South Atlantic Conference as a new ASUN member, also effective on July 1 of that year.[16] The ASUN officially announced this move on May 10.[17]

For 2022–23, Mercer added men's lacrosse to its ASUN membership after the SoCon shut down its men's lacrosse league, and new D-I member Lindenwood became an associate in both men's and women's lacrosse.

ESPN reported on December 9, 2022 that the ASUN and WAC had agreed to form a new football-only conference that plans to start play in 2024. The initial membership would consist of Austin Peay, Central Arkansas, Eastern Kentucky, and North Alabama from the ASUN, and Abilene Christian, Southern Utah, Stephen F. Austin, Tarleton, and Utah Tech from the WAC. UTRGV would become the 10th member upon its planned addition of football in 2025. The new football conference also reportedly plans to move "from what is currently known as FCS football to what is currently known as FBS football at the earliest practicable date."[20]

School names and nicknames listed here reflect those used during the schools' time in the TAAC/ASUN. One school has changed both its name and nickname, and three others have changed only their nicknames: 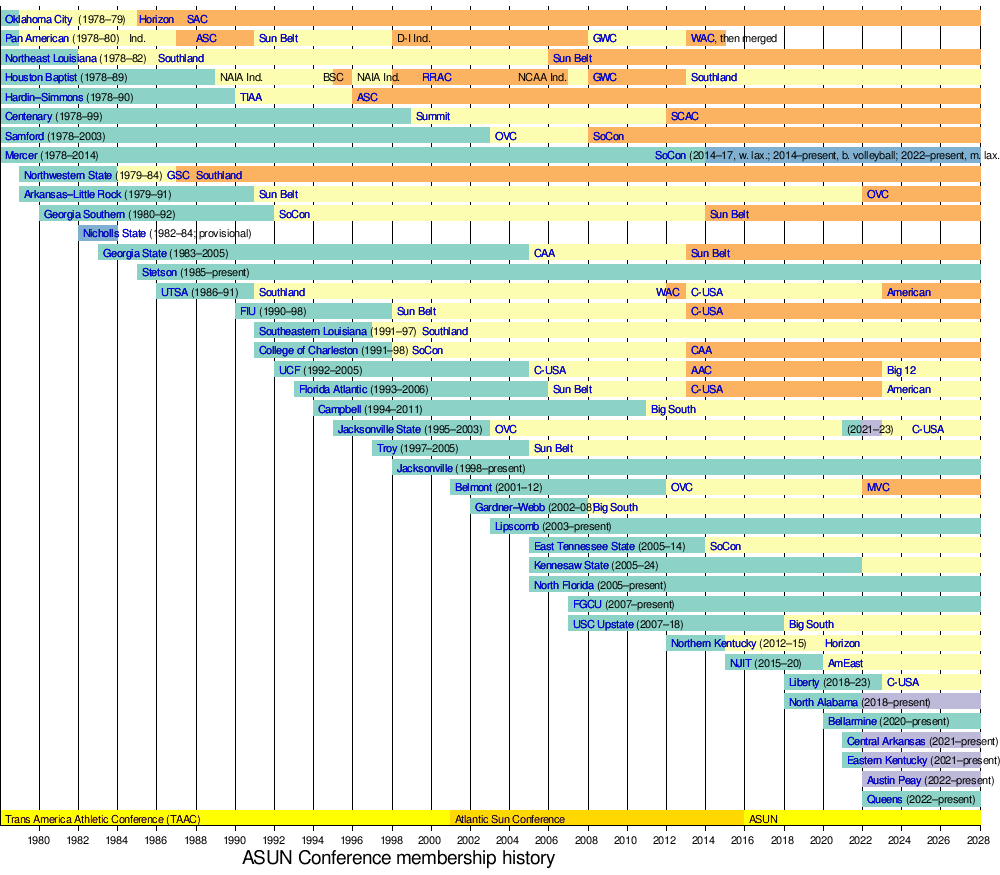 As of the 2022–23 school year, the ASUN sponsors championship competition in 10 men's and 11 women's NCAA sanctioned sports.[30]

In 2008, the ASUN, in an agreement with the Southern Conference (SoCon), Mid-Eastern Athletic Conference (MEAC), and Big South Conference, formed the Coastal Collegiate Swimming Association (CCSA) for schools sponsoring men's and women's swimming and diving within the associated conferences. For the past several years, the ASUN's Commissioner has served as the president of what was initially a swimming & diving-only conference. In 2014 the CCSA expanded to include several other schools from other conferences, and the following year the conference added beach volleyball (women-only at the NCAA level) as a sponsored sport, changing its name to the Coastal Collegiate Sports Association. Currently the conference has 17 member schools, with five men's swimming and diving teams, nine women's swimming & diving teams, and six beach volleyball teams.[31]

When the ASUN announced the July 2021 entry of Central Arkansas, Eastern Kentucky, and Jacksonville State, it also stated that it would launch a scholarship FCS football league, but did not specify when football competition will begin.[10] No current member is required to add football or change its current football standing.[34] At a press conference on February 23, 2021, the ASUN announced that it had entered into a separate football partnership with the Western Athletic Conference (WAC), which had previously announced the relaunch of its football league at the FCS level in fall 2021 with the arrival of four new FCS member schools. The three incoming ASUN members joined the four incoming WAC members in a round-robin schedule branded as the "ASUN–WAC Challenge". Both conferences proposed an amendment to NCAA bylaws that would allow the alliance to receive an automatic bid to the FCS playoffs. The alliance had seven members, one more than the six normally required for an automatic bid, but were not in the same league for an adequate period to meet the current NCAA "continuity" requirement.[35][36] The two leagues' proposal was successful, resulting in an automatic qualifier from the seven-team Challenge, colloquially dubbed "AQ7".[37] With the 2022 arrival of Austin Peay providing the ASUN its sixth scholarship FCS program, the ASUN will start its football league in the 2022 season. However, because the ASUN and WAC were each left with only five playoff-eligible football members for 2022 after Jacksonville State (ASUN) and Sam Houston (WAC) started FBS transitions in that season, both leagues renewed their football partnership for 2022.[38]

The SoCon dropped men's lacrosse after the 2022 season due to further conference realignment. Jacksonville returned men's lacrosse to the ASUN, and full SoCon member Mercer added men's lacrosse to its existing ASUN affiliate membership in beach volleyball. Lindenwood, which started a transition from D-II to D-I in 2022 as a new member of the Ohio Valley Conference, became an affiliate in both men's and women's lacrosse (neither of which is sponsored by the OVC).

Men's varsity sports not sponsored by the league which are played by ASUN schools:

In addition to the aforementioned sports:

Women's varsity sports not sponsored by the league which are played by ASUN schools:

In addition to the aforementioned sports:

The Jesse C. Fletcher and Sherman Day Trophies are awarded each year to the top men's and women's program in the conference. The Bill Bibb Trophy, combining the men's and women's results for the best overall program, was first awarded in 2006–07. East Tennessee State won this overall trophy seven of the nine years it has been awarded; Florida Gulf Coast won in 2012–13, 2014–15 and 2015-16.[47]

This is a partial list of the last 10 champions. For the full history, see ASUN men's basketball tournament.[48]

This is a partial list of the last 10 champions. For the full history, see ASUN women's basketball tournament.[49]