Alen Rery Hanson Michel (born October 22, 1992) is a Dominican professional baseball infielder who is a free agent. A second baseman and outfielder, Hanson made his Major League Baseball (MLB) debut with the Pittsburgh Pirates on May 17, 2016, and has also played for the Chicago White Sox, San Francisco Giants, and Toronto Blue Jays 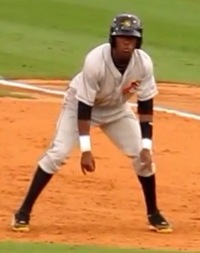 Hanson with the West Virginia Power in 2012

In July 2012, Hanson was named the 40th-best prospect in baseball by Baseball America in their Midseason Top 50 Prospects List.[4] Hanson spent the 2012 season with the Pirates' Class A affiliate, the West Virginia Power of the South Atlantic League. Hanson had a strong season for the Power. He played 124 games and hit .309 with 16 home runs, 62 runs batted in, 13 triples, 39 stolen bases, 55 walks, and 99 runs scored.[2] He was named an All-Star.[5]

Hanson spent the entire 2014 season with the Curve. In 118 games, he hit .280 with 11 home runs, 64 runs batted in, 12 triples, and 25 stolen bases.[2] In August 2014, the Pirates announced that they would be moving Hanson, primarily a shortstop, to second base.[10] At the time of the announcement, Hanson had committed 61 errors in 227 games in 2013 and 2014.[10] Larry Broadway, the Pirates' Director of Minor League Operations, indicated that the move was to increase Hanson's versatility, saying, "we still believe he can play shortstop and believe he will play shortstop for us at some point in the future. Adding this dimension to his game will give him additional opportunity to impact our organization at the Major League level when he is ready."[10]

Hanson spent the entire 2015 season with the Pirates' Triple-A affiliate, the Indianapolis Indians. Hanson played 117 games for the Indians and hit .263 with 6 home runs, 43 runs batted in, and 12 triples.[2] Hanson also stole 35 bases, tying his personal best from 2012.[2]

On May 16, 2016, the Pirates promoted Hanson to the major league club after Starling Marte went on paternity leave.[13][14][15] Pirates manager Clint Hurdle said that Hanson would return to the minors when Marte returned.[13] Hurdle noted that Hanson would likely be recalled again later in the season, but still had yet to prove himself in Triple-A.[13] Hanson said that, when he called his mother to tell her the news, she accidentally hung up and celebrated, while Hanson waited in silence for nearly 10 minutes.[13]

On May 17, Hanson made his big league debut, striking out in a pinch-hit appearance.[16]

On May 18, Hanson recorded his first MLB hit. Entering the game in the 5th inning as a pinch hitter, Hanson reached base on an infield hit. Hanson said after the game that he planned to send the ball to his home in the Dominican Republic as a present for his mother.[17]

Hanson, out of minor league options, opened the 2017 season on the Pirates MLB roster.[18] He was designated for assignment on June 2.[19]

Hanson signed a minor league contract with the San Francisco Giants on December 22, 2017, receiving a non-roster invitation to spring training. He began the 2018 season with the Sacramento River Cats of the Class AAA Pacific Coast League.[22] After a hand injury to starting second baseman Joe Panik, Hanson was promoted by the Giants on April 28 after hitting .403 in 62 at bats for the River Cats with five doubles and three home runs.[23]

On March 28, 2019, Hanson was designated for assignment after failing to make the Opening Day roster.[24]

On April 2, 2019, the Giants traded Hanson, Derek Law, and Juan De Paula to the Toronto Blue Jays for Kevin Pillar.[25] Hanson was called up by the Blue Jays on April 4.[26] He was designated for assignment on May 3.[27] He was outrighted to the Triple-A Buffalo Bisons on May 7.[28] Hanson was released by the organization on August 3, 2019. He ended his stint with Toronto hitting only .163 in 18 games.

On January 23, 2020, Hanson signed a minor league deal with the Seattle Mariners that included an invitation to spring training. He was released by the Mariners organization on June 25, 2020. On June 17, 2021, Hanson re-signed with the Mariners on a new minor league contract.[29]

In 2020, Hanson was selected to the French national baseball team roster for the 2021 World Baseball Classic qualifier in Arizona. Though born in the Dominican Republic, he is eligible to play for Team France because of his French ancestry.[30]