Amos Joseph Otis (born April 26, 1947) is an American former professional baseball player and coach.[1] He played in Major League Baseball as a center fielder from 1967 to 1984, most prominently as an integral member of the Kansas City Royals team that won the franchise's first American League Western Division championship in 1976, and their first American League pennant in 1980.[2] Although the Royals lost the 1980 World Series in six games to the Philadelphia Phillies, Otis produced a .478 batting average with 3 home runs in what would be his only World Series appearance.[3]

A five-time All-Star, Otis twice led the American League in doubles and once led the league in stolen bases.[4] He was considered one of the best center fielders of his era, using his speed to earn three Gold Glove Awards.[2] He was named Royals Player of the Year three times and, finished among the Royals all-time leaders in hits (1,977), home runs (193), runs scored (1,074), stolen bases (340) and games played (1,891).[2][4][5] He also played for the New York Mets and the Pittsburgh Pirates. After his playing career, he continued to work as a hitting instructor. Otis was inducted into the Kansas City Royals Hall of Fame in 1986.[2]

Otis was initially drafted by the Boston Red Sox in 1965 as a shortstop. However, he spent time in the outfield, third base, and first base while playing in the minors. In November 1966, the Mets drafted him and he jumped all the way to Class AAA in 1967. He saw some time with the Mets late in the 1967 season, but he spent 1968 at AAA again before making the major league roster in 1969.[6] He was part of a trade package along with Ed Kranepool and Bob Heise when the Mets attempted to acquire the Braves' Joe Torre who went to the St. Louis Cardinals for Orlando Cepeda instead.[7]

Otis immediately clashed with Mets manager Gil Hodges, who tried to make him a third baseman. After four games, Otis was sent back to the minors for a month. At the end of the season, Royals general manager Cedric Tallis sent third baseman Joe Foy to the Mets, in exchange for the young Otis.[6] Foy was bogged down by drug problems and was out of baseball by 1971. Meanwhile, the Royals immediately moved Otis to center field, and he became the starter for most of the 1970s.

He made the American League All-Star team in each of his first four years with the team and won three Gold Gloves. His speed worked well with the Royals' team philosophy of speed and defense.[6] On September 7, 1971, he became the first player since 1927 to steal five bases in one game. He led the American League with 52 stolen bases that year. Otis scored the final run ever at Kansas City's Municipal Stadium in the fifth inning on October 4, 1972.

He hit as many as 26 homers in a season, knocked in 90 runs or more three times, twice led the AL in doubles and once in stolen bases with 52. He compiled a career total of 341 steals, while being caught stealing 93 times. Otis was a clutch performer, and he consistently produced for the Royals as the team became a perennial contender.

On September 12, 1977, Otis helped eight youths who were stranded after a Royals game had been rained out when flooding prevented the boys' parents picking them up. "If it was my kids", Otis said, "I would have wanted someone to do something for them, too."[8]

Otis hit .478 with three home runs and seven RBIs during the 1980 World Series.[3] He set a record for putouts in a game by an outfielder in Game 3, a contest in which he also homered. He is one of two players (along with Alex Bregman in 2017) to drive in a run in each of his first five World Series games.[9]

Later his offense began to decline, in part due to a hand injury. By the late 1970s and early 1980s his fielding skills had diminished, and he lost his center field job to Willie Wilson near the end of his long run with the Royals. In 1983, he left the team before the season ended when told he was not in the Royals' future plans. 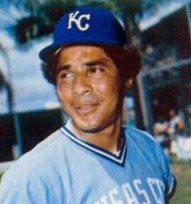 He spent most of 1984 in the National League with the Pittsburgh Pirates. It was a quiet end to a successful career.

He worked for the San Diego Padres and Colorado Rockies as a hitting instructor, later retiring to Las Vegas. Otis still attends Royals reunions, and dons a uniform to play in alumni games. In the early 1990s, Otis admitted that he used a corked bat during part of his Major League career.[10]