1824 treaty between the United Kingdom and the Netherlands

The Anglo-Dutch Treaty of 1824, also known as the Treaty of London, was a treaty signed between the United Kingdom and the Netherlands in London on 17 March 1824. The treaty was to resolve disputes arising from the execution of the Anglo-Dutch Treaty of 1814. For the Dutch, it was signed by Hendrik Fagel and Anton Reinhard Falck, and for the British, George Canning and Charles Williams-Wynn.[1]

The Anglo-Dutch Treaty of 1824, designed to solve many of the issues that had arisen by the British occupation of Dutch colonial possessions during the Napoleonic Wars as well as those regarding the rights to trade that existed for hundreds of years in the Spice Islands between the two nations, was a treaty that addressed a wide array of issues and did not clearly describe the limitations of expansion by either side in the Malay world. 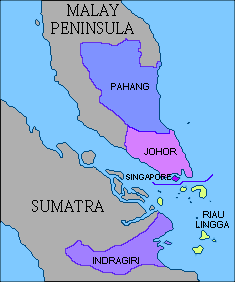 The British establishment of Singapore on the Malay Peninsula in 1819 by Sir Stamford Raffles exacerbated the tension between the two nations, especially as the Dutch claimed that the treaty signed between Raffles and the Sultan of Johor was invalid and that the Sultanate of Johor was under the Dutch sphere of influence. The questions surrounding the fate of Dutch trading rights in British India and the formerly Dutch possessions in the area also became a point of contention between Calcutta and Batavia. In 1820, under pressures from British merchants with interests in the Far East, negotiations to clarify the situation in Southeast Asia started.

Negotiations between Canning and Fagel started on 20 July 1820. The Dutch were adamant on the British abandonment of Singapore. Indeed, Canning was unsure of the exact circumstances under which Singapore was acquired, and at first, only noncontroversial issues such as free navigation rights and the elimination of piracy were agreed upon. Discussions on the subject were suspended on 5 August 1820, and did not resume until 1823, when the commercial value of Singapore had been well-recognized by the British.

The negotiations resumed on 15 December 1823, and the discussions had become centred around the establishment of clear spheres of influence in the region. The Dutch, realising that the growth of Singapore could not be curbed, pressed for an exchange in which they abandoned their claims north of the Strait of Malacca and their Indian colonies in exchange for the confirmation of their claims south of the strait, including the British colony of Bencoolen. The final treaty was signed on 17 March 1824 by Fagel and Canning.

The Anglo-Dutch Treaty of 1824 officially demarcated two territories: Malaya, which was ruled by the United Kingdom, and the Dutch East Indies, which was ruled by the Netherlands. The successor states of Malaya are Malaysia and Singapore and the successor state of the Dutch East Indies is Indonesia. The line that separated the spheres of influence between the British and the Dutch ultimately became the border between Indonesia and Malaysia (with a small segment becoming the border between Indonesia and Singapore). The subsequent colonial influence also affected the Malay language that was commonly spoken as a regional language between these islands diverging into Malaysian and Indonesian variants.

The treaty came while the influence of the British East India Company was waning, and the individual merchant was gaining more influence in Britain. The emphasis on territory and sphere of influence was consistent with former EIC policies in India and elsewhere. During the four-year negotiations, the existence of Singapore strongly started to favour the new independent merchants and their houses. As that came at the heels of the termination of the monopoly the EIC had on the area, the subsequent rise of Singapore as a free port and the first example of the new British free-trade imperialism can be seen as a direct result on the confirmation of its status in the treaty.[citation needed]