This article does not cite any sources. Please help improve this article by adding citations to reliable sources. Unsourced material may be challenged and removed.Find sources: "Arbitrated loop" – news · newspapers · books · scholar · JSTOR (December 2009) (Learn how and when to remove this template message) 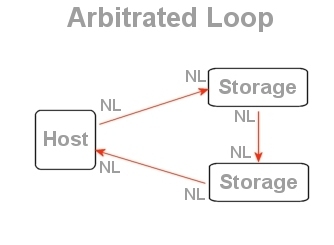 The arbitrated loop, also known as FC-AL, is a Fibre Channel topology in which devices are connected in a one-way loop fashion in a ring topology. Historically it was a lower-cost alternative to a fabric topology. It allowed connection of many servers and computer storage devices without using then very costly Fibre Channel switches. The cost of the switches dropped considerably, so by 2007, FC-AL had become rare in server-to-storage communication. It is however still common within storage systems.

Arbitrated loop can be physically cabled in a ring fashion or using a hub. The physical ring ceases to work if one of the devices in the chain fails. The hub on the other hand, while maintaining a logical ring, allows a star topology on the cable level. Each receive port on the hub is simply passed to next active transmit port, bypassing any inactive or failed ports.

Fibre Channel hubs therefore have another function: They provide bypass circuits that prevent the loop from breaking if one device fails or is removed. If a device is removed from a loop (for example, by pulling its interconnect plug), the hub’s bypass circuit detects the absence of signal and immediately begins to route incoming data directly to the loop’s next port, bypassing the missing device entirely. This gives loops at least a measure of resiliency—failure of one device in a loop doesn’t cause the entire loop to become inoperable.