Area codes for Pennsylvania
This article needs additional citations for verification. Please help improve this article by adding citations to reliable sources. Unsourced material may be challenged and removed.Find sources: "Area codes 215, 267, and 445" – news · newspapers · books · scholar · JSTOR (June 2021) (Learn how and when to remove this template message) 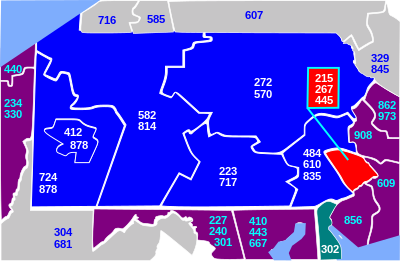 Area codes 215, 267, and 445 are the North American telephone area codes for the City of Philadelphia as well as adjacent portions of Bucks and Montgomery counties in the Commonwealth of Pennsylvania. The original area code is 215, which was established in 1947, while 267 and 445 are overlay codes for the same numbering plan area (NPA).

In 1947, when AT&T established the North American Numbering Plan, 215 included the entire southeastern part of the Commonwealth, from the Delaware border to the Lehigh Valley. Pennsylvania was divided into four numbering plan areas, the second most in the Bell System after New York State, a status shared with Illinois, Ohio, and Texas.

On January 8, 1994, the western and northern portions of the original 215 territory, i.e., Philadelphia's western suburbs, most of Berks County, and the Lehigh Valley, changed to area code 610, while Philadelphia and its northern suburbs retained 215. However, three central office codes were moved from 215 to east-central Pennsylvania's 717, namely 267 in Denver, 484 in Adamstown and 445 in Terre Hill, with 215-267 becoming 717-336 because 717-267 was already in use. These exchanges were originally slated to move into 610, but were served by non-Bell telephone companies which sought to consolidate their eastern Pennsylvania customers into one area code.

This was intended as a long-term solution, but within two years 215 was close to exhaustion due to the rapid growth of the Philadelphia area and the proliferation of cell phones and pagers. For relief, area code 267 was established as an overlay on the 215 numbering plan area on July 1, 1997. Local calls across the Delaware/Pennsylvania border were changed to ten-digit dialing.

Area code 445 was first proposed in July 2000 as an overlay code on numbering plan areas 215 and 267.[1] However, these plans were delayed and then rescinded in 2003 by the Pennsylvania Public Utility Commission.[2] The need for new phone numbers in area codes 215/267 was delayed until 2018. Area code 445 was activated as an additional overlay code on February 3, 2018.[3] This had the effect of assigning 23 million numbers to a service territory of four million people. However, despite Philadelphia's continued growth, 215/267/445 is nowhere near exhaustion. The most recent NANP exhaust projections do not list an exhaust date for the 215/267/445 territory, meaning that Philadelphia may not need a fourth area code until beyond 2050.[4]