The Auburn University Marching Band (AUMB) is the marching band of Auburn University and the 2004 recipient of the Sudler Intercollegiate Marching Band Trophy.[1] With 380 members, the band traces its origins to 1897 when M. Thomas Fullan proposed to then-president Dr. William Broun that the drum corps accompanying cadet drills be replaced with a full instrumental band.

The Auburn University Marching Band performs pre-game and halftime shows at all Auburn Tigers football home games and travels to most away games. (A smaller pep band composed of AUMB members supports the Auburn Tigers at all away games the full band does not attend.) The band has marched in three presidential inaugural parades; those of Presidents Harry S. Truman (1949), George H. W. Bush (1989), and George W. Bush (2005). It is the only band in the SEC that does not have a nickname. Former Auburn University President Dr. Harry Philpott said the following about the band:

"Some other institutions need to give descriptive names to their bands in order to praise them. The quality of the music, the precision of its drills, and the fine image that it portrays have made it unnecessary for us to say more than, 'This is the Auburn University Band.'" [2] 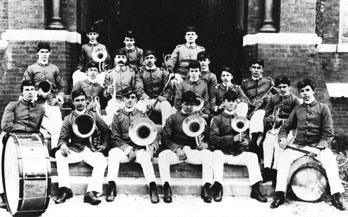 The original Auburn Band in 1897

Directly overseeing the AUMB is the Marching Band Director, who is also the Associate Director of Bands. He leads all full-band rehearsals and performances. While many of the duties are delegated to his GTAs or student leaders, it is his responsibility to ensure the success of the band as a whole. Dr. Corey Spurlin was hired in 2007 as the Marching Band Director upon the promotion of Dr. Rick Good. Spurlin received his undergraduate and master's degrees from the University of Alabama and his doctorate from Louisiana State University in Conducting.[6][7]

The Marching Band Director also has an assistant, who assumes the duties of the director in his absence. Dr. Nikki Gross was hired in 2015 as the Assistant Director of Athletic Bands. Gross received her undergraduate and Master of Music degrees from West Virginia University, and her doctorate from the University of South Carolina.[8]

The AUMB also has many graduate teaching assistants who work under the Directors and alongside the Drum Majors in running the band. For the 2021 season, the GTA team includes Hayden Upperman, Allison Croysdale, Chase Moore, and Stewart Brockman. Each line of the visual ensemble, the "Tiger Eyes", has an individual instructor that specializes in the specific line's main concentration: (i.e. Majorette, Dance, and Flag). The band also utilizes many other staffers, including a videographer, librarians, and a webmaster.

The AUMB has several student leadership positions, the most visible of which are the drum majors who lead the band on the field and direct the band in the stands. Drum major auditions start with an interview of each applicant by the directors and graduate teaching assistants, along with a conducting audition. Those who pass this first stage then have the opportunity to conduct the band as a whole in various stands tunes during an audition that takes place during a band rehearsal. Each remaining applicant takes part in another audition where they each give a mock lesson on marching technique, as well as demonstrate a routine for the traditional drum major run-out. Drum major selections are announced during the band's end-of-year banquet. The 2022 Auburn University Drum Majors are Parker Mercier, Drake Sears, Ross Tolbert, and Jackson Tucker.

Each section has one to three section leaders, depending on the size of the section. They oversee their section during sectional rehearsals, which could cover music or marching technique. During trips and other events, the drum majors often rely on the section leaders to help organize the band before parades and other performances. Section leaders are also responsible for administrative tasks for their sections such as ensuring attendance at events, and seeing that all necessary forms are filled out by their section members.

The band usually has one or more students functioning as librarians. They are responsible for ensuring that music, drill sheets, etc. are printed and ready for rehearsals, in addition to managing the band library. The 2014 librarians were Alex Shive and Logan Pouncey.

The AUMB also has four non-musical leadership positions, known as freshman advisers, who advise the band's rookie members or RATS (Rookie Auburn Tigers) as they are known to the AUMB. Within the band they are primarily known as R.A.T. Leaders and oversee the R.A.T. Program. Other student leadership positions are offered through participation in the band service organizations.

All student leaders are chosen by the directors partially based on the suggestions of the students.

Currently, the instrumentation of the AUMB is as follows:

To achieve a uniform look and sound, the AUMB provides silver instruments for all of its marchers, excluding clarinets and alto saxophones.

The Tiger Eyes are the visual ensemble of the Auburn University Marching Band. The Tiger Eyes nickname was bestowed upon the collective auxiliary groups in 2005, the same year the dancers were introduced to the AUMB. The Tiger Eyes are composed of three distinct lines - flags, majorettes, and dancers - that perform complementary choreography. Tiger Eyes are selected by individual auditions,[12] with a separate audition for each line. The band added a flag corps in the fall of 1985. The majorettes are the oldest group of the Tiger Eyes, tracing their roots to the late 1940s/early 1950s.

After Tiger Walk at home games the Band is split into four pep bands. The four "Spirit Bands" leave from the top of Tiger Walk at the corner of North Donahue Dr. and Samford Ave., Lowder Business Building, the University Tennis Courts on Roosevelt Dr., and from alongside the newly constructed Student Union. Along with the cheerleaders, these bands parade through Auburn's campus to the tunes of "War Eagle" and "Glory to 'Ole Auburn". The four bands meet at the intersection of Donahue and Roosevelt, outside of the Southwest corner of Jordan–Hare Stadium and perform a short pep rally there for all Auburn fans.

In 2019, metal detectors were placed at the entrance of the stadium and fans lined up outside the stadium waiting to be scanned before entering. This caused fan traffic to block the path of two of Spitit Band, and the 4 courners performance was altered to accommodate two larger Spirit Bands instead of four.

When first entering Jordan–Hare Stadium, the band marches around the field, playing "War Eagle" and "Glory to 'Ole Auburn". After circling the field, the band faces the student section to play "War Eagle" one more time. The band then exits the field to prepare for the pregame show. This tradition began the fall of 1985. The AUMB forming the interlocking AU during pregame

The pregame show currently performed by Auburn's band was first introduced in 2004, and incorporates elements from previous pregame shows. During the first year of the new pregame, it was featured several times on ESPN and called "The most entertaining band performance yet." The band enters from the team tunnel underneath the south end zone and performs the pregame fanfare, before marching down the field to "War Eagle". Then the band forms the interlocking AU emblem to perform "Glory". The band will then form a USA set with an American "shield" in the bottom of the S to perform "God Bless America" and the "Star Spangled Banner" before continuing on to perform "The Horse", "Tiger Rag", and some school spirit tunes. Often the end of the national anthem will incorporate a flyover. On some occasions, the band will also play the Alma Mater between "God Bless America" and the national anthem. At the end of pregame the band forms an interlocking AU tunnel through which the football team enters the field. In 2006, the band began to start its pregame performances with a trailer of the band on the video screen, now the AU HD (as of 2007), to warm up the crowds and add to the excitement of the performance.

The AUMB performs at halftime of every Auburn home football game and any away games at which the full band is present. About every three weeks, the band introduces a new show with a specific theme or genre, with musical selections chosen by directors. The halftime show may also consist of special performances by the AUMB such as the High School Marching Honor Band.[13] The band alternates which side of the stadium it plays the show towards, and in some cases will play part of a show directly to the student section.

During the fourth quarter of a football game, a small pep band, called the "Tiger Bandits," leaves the stands to play for the fans seated in other areas of the stadium. This group consists of different players each week, and is sometimes also called the "Fourth Quarter Band." This tradition has since been discontinued.

At the conclusion of every gameday practice and Auburn football game, regardless of whether or not the game was won, the band will lay down their instruments, lock their arms over each other shoulders, and sing the Auburn University Alma Mater. At a game, after this, the band will play the "Thumb Cheer" fanfare and "War Eagle" before dismissing from the stands.

Prior to the tradition of singing the Alma Mater, the band played the complete song at the conclusion of each Auburn football game.

The Auburn University Marching Band takes pride in its freshman orientation program, more commonly referred to as the R.A.T. Program. In the early days of the university, all freshmen across campus were known as rats.[14] Nowadays, R.A.T. is used as an acronym for "Rookie Auburn Tiger" and is a term of endearment. This is only used by the marching band and Auburn football team.

As is stated on their website, the purpose of the R.A.T. Program is to help out first year marchers adjust to the differences of college and college marching band as compared to high school.[15] In addition, any staff who are in their first year with the band are also called R.A.T.s, up to and including the Marching Band Director when appropriate.

The program is overseen by four R.A.T. Leaders. These "freshman advisers", as they are typically referred to in publications outside the band, have the duty to oversee R.A.T. Adoptions, R.A.T. Drills, and R.A.T. Activities during band camp. Over the course of the season, they serve as mentors for the rookie members, and emcee the band's R.A.T. Banquet and Bowl Banquet.

R.A.T. Adoptions are a ceremony held after the first full-band music rehearsal. Each male R.A.T. is given a R.A.T. Mom while each female R.A.T. is given a R.A.T. Dad. These R.A.T. Parents serve as friends and mentors for their rookie "son" or "daughter" throughout the course of the week, as well as throughout the season. The R.A.T. Parents are particularly helpful for R.A.T.s who are freshmen and have left home for the first time, and need someone who can help explain the college experience. Depending on the amount of participation of the vets, it is common to have "twins".

A first-year marcher traditionally retains the title of R.A.T. until the Auburn Tigers claim victory in the annual Iron Bowl game versus the University of Alabama Crimson Tide during their time in school. For the first time since 2001, 2nd year returning members for the 2009 season are still considered R.A.T.s.

In 1987 a new tradition began, the annual Auburn Alumni Band[16] reunion. Every year since then a band of alumni has joined the AUMB on the field at halftime during one home football game. This game is often the homecoming game, but not always. This annual event normally attracts over 300 alumni band members from many previous years, resulting in over 600 members of the combined bands on the field for halftime. This show has been a favorite among band members since its inception, and continues to be a fond highlight of each football season. The Alumni Band has also taken up the challenge to support the fund raising efforts for the new Band Facility currently under development.