This article uncritically uses texts from within a religion or faith system without referring to secondary sources that critically analyze them. Please help improve this article by adding references to reliable secondary sources, with multiple points of view. (August 2018) (Learn how and when to remove this template message) 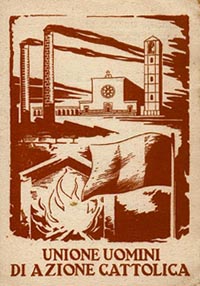 In 1909 count Gentiloni was appointed by Pope Pius X also as head of UECI, a political Catholic organization, and in such capacity he co-authored in 1912 with Giovanni Giolitti the Patto Gentiloni which won the Italian elections in 1913.

In the thirties the original strongly anti-modernist stance of the organization started changing.

Other associations related to Azione Cattolica