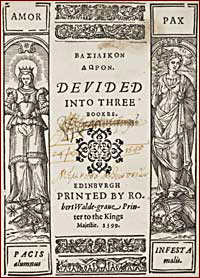 Title page of the Basilikon Doron

The Basilikon Doron is a treatise on government written by King James VI of Scotland (who would later become, as well, James I of England), in 1599.

Basilikon Doron (Βασιλικὸν Δῶρον) means "royal gift" in Ancient Greek and was written in the form of a private letter to James's eldest son, Henry, Duke of Rothesay (1594-1612). After Henry’s death, James gave it to his second son, Charles, born 1600, later King Charles I. Seven copies were printed in Edinburgh in 1599, and it was republished in London in 1603, when it sold in the thousands.

This document is separated into three books, serving as general guidelines to follow to be an efficient monarch. The first describes a king’s duty towards God as a Christian. The second focuses on the roles and responsibilities in office. The third concerns proper behaviour in daily life.

As the first part is concerned with being a good Christian, James instructed his son to love and respect God as well as to fear Him. Furthermore, it is essential to carefully study the Scripture (the Bible) and especially specific books in both the Old and New Testaments. Lastly, he must pray often and always be thankful for what God has given him.

In the second book, James encouraged his son to be a good king, as opposed to a tyrant, by establishing and executing laws as well as governing with justice and equality, such as by boosting the economy. It is important to invite foreign merchants into the country and to base the currency on gold and silver. Likewise, according to James,

The final portion of the Basilikon Doron focuses on the daily life of a monarch. For instance, James advised his son to eat meat to be strong for traveling, and during wartime.

All of these guidelines composed an underlying code of conduct to be followed by all monarchs and heads of state to rule and govern efficiently. James assembled these directions as a result of his own experience and upbringing. He, therefore, offered the Basilikon Doron to his son with the hope of rendering him a capable ruler and perhaps to pass it down to future generations.

Overall, it repeats the argument for the divine right of kings, as set out in The True Law of Free Monarchies, which was also written by James. It warns against "Papists" and derides Puritans, in keeping with his philosophy of following a "middle path", which is also reflected in the preface to the 1611 King James Bible. It also advocates removing the Apocrypha from the Bible.

The published Basilikon Doron may well have been intended to portray the king in a favourable light. James Sempill assisted James in composing it. Robert Waldegrave, who was bound to secrecy, printed seven copies at the king's behest. Henry Taylor said that he had printed it on Waldegrave's press. Richard Royston and then William Dugard printed further copies.