UK Parliament constituency in England since 2010

Bermondsey and Old Southwark is a constituency[n 1] in the House of Commons of the UK Parliament. Since 2015, it has been represented by Neil Coyle, who was elected as a Labour MP but was suspended from the party in February 2022 following an accusation of racism.[3][n 2] The seat was created for the 2010 general election, almost identical to North Southwark and Bermondsey seat previously held by Simon Hughes from the 1997 general election, on a review of parliamentary representation in London by the Boundary Commission for England facing very minor boundary changes.

Comprising the northern part of the London Borough of Southwark, the seat lies immediately to the south of the City of London.

The southern halves of the Thames crossings London Bridge and Tower Bridge are in the seat, as is the historic Southwark area, with its cathedral, the Globe Theatre and Borough Market. There is also extensive commercial development that has spilled over the river from the city, notably the Shard London Bridge.

To the east, the seat also includes the Rotherhithe peninsula, where contemporary housing now replaces former industrial areas, particularly around Canada Water and the neighbourhood of Bermondsey.

At its southern end, the seat includes parts of Walworth. Here the seat adjoins Camberwell and Peckham, one of the safest Labour seats in London.

The seat had remained a rare example of an inner London Liberal Democrat seat since Simon Hughes first won it in 1983, until he lost it at the 2015 general election to Labour.

Note: the first MP was elected for predecessor Bermondsey seats continuously from a by-election in 1983 until the seat was created in 2010: see the former constituency of North Southwark and Bermondsey. 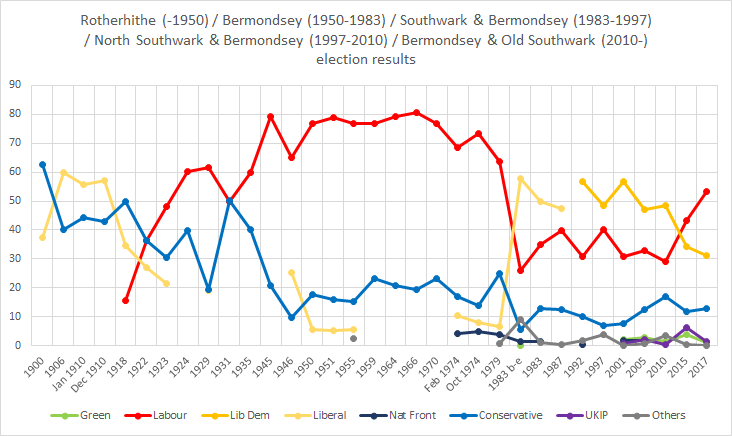