Bhimashankar Temple is a Jyotirlinga shrine located 50 km Khed taluka (alias Rajgurunagar), near Pune, in Maharashtra, India. It is located 127 km from Shivajinagar (in Pune) in the Ghat region of the Sahyadri Mountains. Bhīmāshankar is also the source of the river Bhima, which flows southeast and merges with the Krishna river near Raichur. The other Jyotirlinga shrines in Maharashtra are Trimbakeshwar near Nashik and Grishneshwar.

As per the Shiv Mahapuran, once Brahma (the Hindu God for creation) and Vishnu (the Hindu God for protection) had an argument about creation.[1] To test them, Shiva pierced the three worlds as a huge endless pillar of light, the jyotirlinga. Vishnu and Brahma split their ways to search downwards and upwards respectively to find the end of the light in either direction. Brahma lied that he found out where it ends, while Vishnu accepted defeat. Shiva appeared as the second pillar of light and cursed Brahma that He would have no place in ceremonies while Vishnu would be worshipped till the end of eternity. The jyotirlinga is the supreme partless reality, out of which Shiva partly appears. The jyotirlinga shrines, thus are places where Shiva appeared as a fiery column of light.[2][3]

There are 64 forms of Shiva, not to be confused with Jyotirlingas. Each of the twelve jyothirlinga sites take the name of the presiding deity - each considered different manifestation of Shiva.[4] At all these sites, the primary image is lingam representing the beginningless and endless Stambha pillar, symbolizing the infinite nature of Shiva.[4][5][6] The twelve jyothirlinga are Somnath in Gujarat, Mallikarjuna at Srisailam in Andhra Pradesh, Mahakaleswar at Ujjain in Madhya Pradesh, Omkareshwar in Madhya Pradesh, Kedarnath in Himalayas, Bhīmāshankar in Maharashtra, Viswanath at Varanasi in Uttar Pradesh, Triambakeshwar in Maharashtra, Vaidyanath in Jharkhand, Nageshvara Jyotirlinga at Dwarka in Gujarat, Rameshwar at Rameswaram in Tamil Nadu and Grishneshwar in Maharashtra.[1][7] 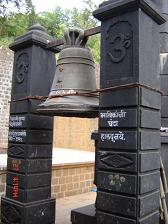 Bell at the temple

The Bhimashankar temple is a composite of old and new structures in the Nagara style of architecture. It shows the excellency of the skills achieved by ancient Vishwakarma sculptors. It is a modest yet graceful temple and it dates back to the 13th century while the sabhamandap was built in the 18th century by Nana Phadnavis. The shikhara was built by Nana Phadnavis. The great Maratha ruler Chattrapati Shivaji Maharaj is said to have made endowments to this temple to facilitate worship services. As with other Shiva temples in this area, the sanctum is at a lower level.[8]

Although the structure here is fairly new, the shrine Bhimashankaram (and the Bhimarathi river) have been referred to in literature dating back to the 13th century CE. Saint Jnaneshwar is said to have visited Tryambakeshwar and Bhimashankar. A unique bell (Roman style) can be seen in front of the temple. This bell has an idol of Mother Mary with Jesus. This large bell was presented by Chimaji Appa (Brother of Bajirao Peshwa I and uncle of Nanasaheb Peshwa). On 16 May 1739, Chimaji Appa collected five large bells after he won a war against the Portuguese from the Vasai Fort. He offered one here at Bhimashankar and the others at Menavali near Wai in front of a Shiva Temple on the banks of the Krishna river, Banshanker temple (Pune), Omkareshwar Temple (Pune) and Ramlinga temple (Shirur).[8]

There are Buddha style carvings of Amba-Ambika, Bhootling, and Bhimashankar in the hills of Manmaad near Bhimashankar at a height of 1034 metres. A big bell in Hemadpanthi structure built by Nana Phadanavis is a feature of Bhimashankar. Places that can be visited in the vicinity include Hanuman Lake, Gupt Bhimashankar, Origin of River Bhima, Nag Phani, Bombay Point, and Sākshi Vinayak. Bhimashankar is a reserved forest area of 130.78 km2 and was declared a wildlife sanctuary in 1985. This sanctuary is a part of the Western Ghats, so it is rich in floral and faunal diversity. A variety of birds, animals, insects and plants can be seen. A rare animal Malabar Giant squirrel locally called as "Shekaru" can be found in the deep woods. The Bhorgiri fort is close to Bhimashankar.

Other temples and shrines

There is a shrine known as Kalmaja near the Bhimashankar temple. Kalamaja is a Goddess dedicated to a tree named Kalamb. She is a local tribal Goddess and many stories have been spawned due to the influence of Hinduism on this region.

The Mokshakund thirtha is behind the Bhimashankar temple, and it is associated with the rishi Kaushika. There are also the Sarvathīrtha, the Kusharanya thirtha - where the Bhima river begins to flow eastward, and the Jyanakund.

Bhimashankar is an ancient shrine, one of the 12 Jyotirlingas of Shiva. Far away from the tumult of urban life, peeping through the white clouds, Bhimashankar can be termed a pilgrim's paradise. The dense forests surrounding the high ranges are an abode for rare species of flora and fauna. Situated at the extreme end of the Sahyadri Ranges, this place gives a wonderful view of the world around the local rivers and hill stations.

Bhimashankar is the source of the Bhima River, which flows southeast and merges with the Krishna River. With endless stretches of virgin forests, lofty peaks that seem to reach out to the heavens, and the whispering waters of the Bhimā River, Bhimashankar is definitely one of God's choicest creations.

It seems as if Lord Shiva is keeping a silent vigil over the majestic ranges of the Sahyadris. The serenity interrupted only by the silent murmuring of the cool breeze and the occasional chirping of birds, Bhimashankar is a trekker's delight and a traveller's sojourn.

The Khed/Rajgurunagar is the administrative taluka in Pune district, comprising the upper reaches of the Ghod and Bhīmā rivers. Bhimashankar Temple has located in the village of Bhorgiri 50 km in the north west of Khed. It is located 127 km away from Pune in the Ghat region of the Sahyadri hills. It is also the location of the Bhimashankar Wildlife Sanctuary. It is about 130 km from Pune by road and 62 km away from Manchar. Bhimashankar is in Pune District.

Although the present structure of the temple appears to be of comparatively recent origin, the shrine Bhimashankaram (and the Bhimarathi river) have been referred to in literature dating back to the 13th century. Built in the Nagara style of architecture, this temple is a modest yet graceful temple and dates back to the 18th century.

It is believed that the ancient shrine was erected over a Swayambhu Lingam (that is the self emanated Shiva Lingam). It can be observed that the Lingam is exactly at the centre of the floor of the Garbagriham (the Sanctum Sanctorum) of the temple. Intricate carvings of divine beings, interspersed with human figurines adorn the pillars and the doorframes of the temple. Scenes from mythology find themselves captured in these magnificent carvings.

Within the temple precincts, there is also a small shrine dedicated to Lord Shani Mahātma (also called Shanaeshwara). The idol of Nandi, Lord Shiva's vāhan (vehicle) has been installed as is the case with all the Siva Temples, just at the entrance of the temple.

This temple is closely associated with the legend of Shiva slaying the demon Tripurāsura associated with the invincible flying citadels, the "Tripurās". Shiva is said to have taken abode in the 'Bhima Shankara' form, upon the request of the Gods, on the crest of the Sahyadri hills, and the sweat that poured forth from His body after the battle is said to have formed the Bhimarathi river.

The Gopura-shikhara of the temple was built by Nāna Phadnavis. The great Maratha ruler, Shivāji is also said to have made endowments to this temple to facilitate the carrying out, of worship services. As with other Shiva temples in this area, the sanctum is at a lower level. The 'Shani temple' is located inside the main complex of the temple of Bhimashankar.

Between the two pillars outside the 'Shani' temple, one comes across an ancient huge Portuguese bell. Behind the temple, there is a small pathway that leads one to the banks of a river. "Stepping out of the Temple, one is awed with a bewitching view of the virgin wilderness, occasionally interrupted by the glimpses of the majestic forts on the surrounding mountains."

History unveils itself in the peaks of the Sahyadris. Bhimashankar – a place where spiritual splendor merges with nature's magnificence is definitely a pilgrim's paradise. There are other temples and shrines, near the main temple. There is a shrine to Kamalaja near the Bhimashankar temple. Kamalaja is an incarnation of Parvathi, who aided Shiva in his battle against Tripuraasura. Kamalajaa was worshipped with offerings of lotus flowers by Brahma.

There is a shrine for Siva Ganams, Shaakini and Daakini who assisted Shiva in the battle against the demon, Bhima. Kaushika Maha Muni is said to have done 'Tapas' (penance) there. The place where he bathed is called Mokshakund thirtham, which is located behind the Bhimashankar temple. There are also the Sarvathirtha, the Kusharanya thirtha - where the Bhīmā river begins to flow eastward, and the Jnyanakund.