listen)) is a Landkreis (district) in Baden-Württemberg, Germany. It is bounded by (from the south and clockwise) the districts of Ravensburg, Sigmaringen, Reutlingen and Alb-Donau, and the Bavarian districts Neu-Ulm, Unterallgäu and the district-free city Memmingen. The major towns in the district of Biberach are Biberach an der Riss, Riedlingen, Ochsenhausen and Laupheim.

The Federsee is a small lake in the southwest of the district. Its area is only 1.4 km², but it is famous for Neolithic findings and rare birds.

The local newspaper is the Schwäbische Zeitung ("Swabian Newspaper"). Biberach has also a film festival for German films which celebrated its 31st anniversary in 2009. 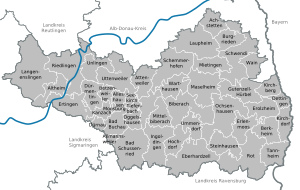 Clickable map of municipalities in the district

Wikimedia Commons has media related to Landkreis Biberach.
Regions, and urban and rural districts in the state of Baden-Württemberg in Germany
Towns and municipalities in Biberach (district)
Authority control
Categories
Categories: