Bill Madlock was born in Memphis, Tennessee, but grew up in Decatur, Illinois, where he graduated from Eisenhower High School.[1][2]

He was considered for the baseball draft by the St. Louis Cardinals in 1969, but would not sign with the Cardinals. By the time Madlock was ready to sign with a major league baseball team, he had decided to go with an offer from the Washington Senators organization.[2]

Madlock was drafted by the Washington Senators in the 5th round of the secondary phase of the 1970 amateur draft. After spending a few years in the minor leagues, with a season with the Ossining Oxen in the team's only season, he made his debut with the Texas Rangers (who had moved from Washington after the 1971 season) on September 7, 1973, and played 21 games with them, batting .351. Prior to his promotion, he led the Pacific Coast League in total bases (268) and runs scored (119), finished second in batting (.338) and had 22 homers and 90 RBI at Triple-A Spokane. He was traded along with Vic Harris from the Rangers to the Chicago Cubs for Ferguson Jenkins on October 25, 1973. His new manager with the Cubs Whitey Lockman said about him, "Our scouts are extremely high on Madlock as being one of the best hitting prospects they have seen in some time."[5] Madlock replaced Ron Santo as the Cubs' third baseman and hit .313, the highest average for a Cubs third baseman since Stan Hack batted .323 in 1945. In 1975 Madlock won his first batting title with a .354 average. On July 26 of that year he went 6-for-6 during a Cubs' loss to the New York Mets. He also made the first of his three All-Star appearances and shared Game MVP honors with Jon Matlack.

In 1976 Madlock repeated as batting champion with a .339 average, edging out Ken Griffey Sr. of the Cincinnati Reds on the final day of the regular season (October 3, 1976). In an 8–2 win over the Montreal Expos, Madlock collected four singles to raise his average from .333 to .339, one point ahead of Griffey. Griffey belatedly entered his team's game (which the Reds won 11–1 over the Atlanta Braves), and went 0-for-2, dropping his average to .336. 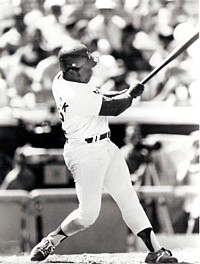 During the advent of MLB free agency following the 1976 season, Madlock demanded a multiyear contract with an annual salary of about $200,000, but was rejected by team owner Philip K. Wrigley who then announced that Madlock would be traded "to anyone foolish enough to want him."[6] In what was considered one of the five worst trades in Cubs history by the Chicago Tribune's Chris Kuc in 2016,[7] Madlock and Rob Sperring were dealt to the San Francisco Giants for Bobby Murcer, Steve Ontiveros and minor league pitcher Andy Muhlstock on February 11, 1977.[6] Madlock, an average fielder at best, was moved to second base (the Giants already had Darrell Evans at third), and batted "only" .302 and .309 in 1977 and 1978 respectively.

When Madlock, along with Lenny Randle and Dave Roberts was traded to the Pittsburgh Pirates for Ed Whitson, Al Holland and Fred Breining on June 28, 1979, he was a starting third baseman again on a ballclub that eventually won the 1979 World Series.[8] He batted .328 with the Pirates during the regular season and .375 in the World Series.

In 1980 Madlock's average dropped to .277 as the Pirates finished third in the National League East, eight games behind the eventual World Champion Philadelphia Phillies. For Madlock, the season became infamous for an incident during a May 1 game against the Montreal Expos at Three Rivers Stadium. Madlock poked umpire Jerry Crawford in the face with his glove after being called out on strikes with the bases loaded. National League President Chub Feeney fined Madlock $5,000 and suspended him 15 games. Madlock appealed the suspension and remained in uniform before finally serving the suspension on June 6, after National League umpires threatened to eject him from every game he tried to play in.[9]

Madlock won two more batting titles, in 1981 and 1983, making him the first player to win multiple batting titles with two different teams. He also finished second in the National League in batting in 1982, his .319 average bettered only by Al Oliver's .331. Afterwards, however, his play mirrored the decline of the team. In August 1985 the Pirates traded him to Los Angeles which, like Pittsburgh in 1979, was contending for a division title. The Dodgers lost to the St. Louis Cardinals in the NLCS but Madlock hit three home runs in the loss. In 1987, the Dodgers released Madlock, who signed a few days later with the Detroit Tigers, hitting .279 with 14 home runs and 50 RBI in 87 games including a three home run game on June 28, where he again earned a trip to the postseason. Madlock became a free agent at the end of the 1987 season and played for the Lotte Orions in Japan in 1988.

Madlock's four batting titles is the most of any player in major league baseball history who is not enshrined in the Hall of Fame.

Madlock also had a fiery temper, and was involved in several incidents (including the 1980 episode) that exemplified it:

As a player, Madlock was ejected from 18 games. He was also ejected from three games during his two years as a Tiger coach.[10]

Over time, Madlock's approach to umpires changed. Umpire Jerry Crawford remarked after his 1980 dispute with Madlock that "[t]here's no question [Madlock has] calmed down. He's changed, which is great, because a guy of his ability doesn't have to do the things to umpires that he was doing." Madlock's agent, Steve Greenberg, son of baseball great Hank Greenberg, added that "[t]he Crawford incident was a benchmark. Now if he disagrees with an umpire, he uses his charm, which can be considerable."[2]

In 2000 and 2001 Madlock was a coach with the Detroit Tigers, reuniting with Tigers manager and former Pirates teammate Phil Garner. In 2001, Madlock was invited by Omar Moreno, another former Pirate teammate, to coach in a professional league in Panama City, Panama. In 2003, Madlock was hired to manage the Newark Bears of the independent Atlantic League; the team went 117–134 during his two seasons. In 2013, he was announced as the manager of the Independent League Tiffin Saints.

Madlock is currently living in Las Vegas, NV where since 2007 he is teaching batting lessons to kids at the Vegas Valley Batter's Box.