1996 plane crash off the coast of the Dominican Republic

Birgenair Flight 301 was a flight chartered by Turkish-managed Birgenair partner Alas Nacionales from Puerto Plata in the Dominican Republic to Frankfurt, Germany, via Gander, Canada, and Berlin, Germany. On 6 February 1996, the 757-200 operating the route crashed shortly after take-off from Puerto Plata's Gregorio Luperón International Airport.[1][2] All 189 people on board died.[3] The cause was pilot error after receiving incorrect airspeed information from one of the pitot tubes, which investigators believe was blocked by a wasp nest built inside it. The aircraft had been sitting unused for 20 days, and without pitot tube covers in place for the preceding 2 days before the crash.

The aircraft was an 12-year-old Boeing 757-225 originally delivered to Eastern Air Lines in February 1985 and registered as N516EA. It was powered by two Rolls-Royce RB211-535E4 engines. After Eastern Air Lines's bankruptcy and subsequent liquidation in 1991, the aircraft was stored at the Mojave Air and Space Port for more than a year. It was purchased by Aeronautics Leasing in April 1992, and then leased to Canadian airline Nationair in May 1992, and stayed with the airline until its demise the following year. It was leased again by the same lessor in July 1993 to Birgenair and then sub-leased to International Caribbean Airways in December 1994, and Birgenair operated the airliner until it crashed.[5][6]

The passengers consisted mainly of Germans, along with nine Poles including two Members of the Parliament, Zbigniew Gorzelańczyk of the Democratic Left Alliance, and Marek Wielgus of the Nonpartisan Bloc for Support of Reforms (BBWR).[2][8] Most of the passengers had booked Caribbean package holidays with Öger Tours; Birgenair held 10% of Öger Tours.[9] 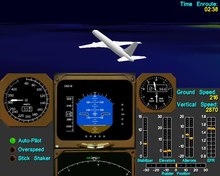 During takeoff roll at 23:42 AST (03:42 UTC),[7]: 1  the captain found that his airspeed indicator (ASI) was malfunctioning but he chose not to abort the takeoff.[10] The first officer's ASI was functional, though subsequent warning indicators would cause the aircrew to question its veracity as well. Aircraft took off normally at 23:42 AST, for the first leg of the flight. At 2,500 feet (760 m), the flight switched to main air traffic control and was instructed to climb to flight level 280 (28,000 ft or 8,500 m). The autopilot was engaged 1 minute and 30 seconds into the flight.

Approximately 10 seconds later, a warning about rudder ratio and Mach airspeed trim appeared. The crew was at that point becoming increasingly confused, because captain's ASI showed over 300 knots (560 km/h; 350 mph) and was increasing and first officer's ASI, which was correct, was showing 220 knots (410 km/h; 250 mph) and decreasing.

Then, the captain assumed that both ASI are wrong, and decided to check circuit breakers. When the first circuit breaker was checked, the overspeed warning appeared, as the captain’s ASI, the primary source of the information about airspeed for autopilot, was showing airspeed near 350 knots (650 km/h; 400 mph) and increasing. Then, the second circuit breaker was pulled to silence the warning. As the plane was climbing through 4,700 feet (1,400 m), the captain's ASI read 350 knots (650 km/h; 400 mph). The autopilot, which was taking its airspeed information from the same equipment that was providing faulty readings to the captain's ASI, increased the pitch-up attitude and reduced power in order to lower the plane's airspeed. The first officer's ASI was giving a correct reading of 200 knots (370 km/h; 230 mph) and was still decreasing.[7]: 16  With all contradictory warnings given by the plane, the confused captain decided to reduce thrust of the plane, believing it was flying too fast.[7]: 18

This action immediately triggered the 757's stick-shaker stall alert, warning the confused pilots that the aircraft was flying dangerously slow. Also, the autopilot disengaged. As the plane was closing to stall, its path became unstable and it started descending. Meanwhile, the controller, still unaware of any problems, called the flight, but, as the crew struggled with problems, the first officer said "Standby". First officer and relief pilot, aware of the scale of the problem, were suggesting various methods to recover from the stall, but the confused captain ignored all of them. About 20 seconds before crash, the captain finally attempted to recover from the stall by increasing the plane's thrust to full, but as the aircraft was still in a nose up attitude, the engines were prevented from receiving adequate airflow required to match the increase in thrust. The left engine flamed out, causing the right engine, which was still at full power, to throw the aircraft into a spin. Moments later, the plane inverted.[11] At 23:47 AST, the Ground Proximity Warning System (GPWS) sounded an audible warning, and eight seconds later the plane crashed into the Atlantic Ocean. All 176 passengers and 13 crew members died on impact.

The Dominican Republic government's General Directorate of Civil Aviation (Spanish: Dirección General de Aeronáutica Civil) (DGAC) investigated the accident and determined the probable cause to be:[12]

The crew's failure to recognize the activation of the stick shaker as a warning of imminent entrance to the stall, and the failure of the crew to execute the procedures for recovery from the onset of loss of control.

Investigations later showed that the plane was actually travelling at 220 knots (410 km/h; 250 mph) at the time of the accident.[7] The investigation concluded that one of the three pitot tubes, used to measure airspeed, was blocked.

None of the pitot tubes were ever recovered so investigators were unable to determine for certain what caused the blockage. Investigators believe that the most likely culprit was the black and yellow mud dauber, a type of solitary sphecid wasp well known to Dominican pilots, which tends to establish its nest in artificial, cylindrical structures, or make its own cylindrical nest out of mud. According to the final report, section 2.3 – "Aircraft maintenance factors", the aircraft had not flown in 20 days, however, this was not the duration for which pitots remained uncovered, but was evidently enough time to allow the wasps the opportunity to construct nests in the tubes.[7]: 20 [13][14] According to Cetin Birgen, president and CEO of Birgenair, the pitot covers were removed two days before the accident in order to conduct an engine test run.[7]: 20 [15]

The investigation noted a number of other factors and suggested changes.[10] They reconfirmed that the pilots should have followed existing procedures and aborted the takeoff when they found that their airspeed indicators were already in significant disagreement as the plane accelerated down the runway. Results from a number of simulations with experienced pilots found that the combination of the overspeed warning horn and underspeed stick shaker while in flight was an overly confusing contradictory set of messages for many pilots; the FAA issued a directive that pilot training would now include a blocked pitot tube scenario. The FAA research had also revealed that the situation also led to multiple other contradictory warning sounds and warning lights that increased the demands on the pilot to fly the plane. The FAA asked Boeing to change some of those warnings, as well as add a new warning to tell both pilots that their instruments disagree, add the ability for the pilots to silence troublesome alarms, and to modify the system so that the pilots can choose which pitot tube the autopilot uses for airspeed readings.[10] Memorial for the victims of Birgenair Flight 301 in Puerto Plata Shortly after the crash of flight 301, the airline's overall image and profits became heavily damaged, and some of its planes were grounded at the same time. Birgenair went bankrupt in October of the same year as there were concerns about safety after the accident, causing a decline in passenger numbers. The crash and ensuing negative publicity both contributed to Birgenair's bankruptcy.[16]