Consecrated wine and bread integral to many Roman Catholic rites The Blessed Sacrament is displayed in a procession at the Diocese of Charlotte Eucharistic Congress in 2005. It is normally reserved in the tabernacle.

The Blessed Sacrament, also Most Blessed Sacrament, is a devotional name to refer to the body and blood of Christ in the form of consecrated sacramental bread and wine at a celebration of the Eucharist. The term is used in the Latin Church of the Catholic Church, as well as in Anglicanism, Lutheranism, Methodism,[1] and the Old Catholic Church, as well as in some of the Eastern Catholic Churches. In the Byzantine Rite, the terms Holy Gifts and Divine Mysteries are used to refer to the consecrated elements.[2] Christians in these traditions believe in the Real Presence of Jesus Christ in the Eucharistic elements of the bread and wine and some of them, therefore, practice Eucharistic reservation and adoration. This belief is based on interpretations of both sacred scripture and sacred tradition. The Catholic belief has been defined by numerous ecumenical councils, including the Fourth Lateran Council and the Council of Trent, which is quoted in the Catechism of the Catholic Church (which explains the meaning of transubstantiation).[3]

The largest Portuguese feast in the world is held in New Bedford, Massachusetts in honor of the Blessed Sacrament attracting over 100,000 visitors each year.[4][5]

The Blessed Sacrament exposed on the main altar of Santa Cruz Church, Manila

The Blessed Sacrament can also be exposed (displayed) on an altar in a monstrance. Rites involving the exposure of the Blessed Sacrament include Benediction and eucharistic adoration. According to Catholic theology, the host, after the Rite of Consecration, is no longer bread, but is the Body, Blood, Soul, and Divinity of Christ. Catholics believe that Jesus is the sacrificial Lamb of God prefigured in the Old Testament Passover. Unless the flesh of that Passover sacrificial lamb was consumed, the members of the household would not be saved from death. As the Passover was the Old Covenant, so the Eucharist became the New Covenant. (Matthew 26:26–28, Mark 14:22-24, Luke 22: 19–20, and John 6:48–58)

Reception of the Blessed Sacrament in the Anglican Communion and other Anglican jurisdictions varies by province. Formerly, Confirmation was generally required as a precondition to reception, but many provinces now allow all the baptised to partake as long as they are in good standing with the Church and have previously received First Communion.

In most Lutheran churches, a person must have had catechetical training prior to a First Communion (or have received Confirmation in the Lutheran Church) to receive the Eucharist. Recently, more liberal churches allow all who are baptized to receive it. Similar to the Anglican teaching, Lutherans are also taught to genuflect or bow in the presence of the Blessed Sacrament, which is normally located on an altar. In the Lutheran churches that still celebrate the Feast of Corpus Christi, like the Catholic Church, a monstrance is used to display the Blessed Sacrament during the Benediction.[citation needed] 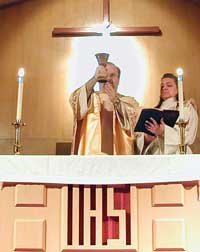 A Methodist minister elevates the Chalice

The Doctrines and Discipline of the Methodist Church specifies, on days during which Holy Communion is celebrated, that "Upon entering the church let the communicants bow in prayer and in the spirit of prayer and meditation approach the Blessed Sacrament."[8]

With respect to Methodist Eucharistic theology, the Catechism for the use of the people called Methodists states that, "[in the Eucharist] Jesus Christ is present with his worshipping people and gives himself to them as their Lord and Saviour".[9] Methodist theology of this sacrament is reflected in a Eucharistic hymn written by one of the fathers of the movement, Charles Wesley:[10]

We need not now go up to Heaven,
To bring the long sought Saviour down;
Thou art to all already given,
Thou dost e’en now Thy banquet crown:
To every faithful soul appear,
And show Thy real presence here![10]

Methodists practice an Open Table, in which all baptised Christians are invited to receive Holy Communion.[11]