listen); Breton: Breizh [brɛjs]) is the westernmost region of Metropolitan France. It covers about four fifths of the territory of the historic province of Brittany. Its capital is Rennes. It is one of the two Regions in Metropolitan France that does not contain any landlocked departments, the other being Corsica.

Brittany is a peninsular region bordered by the English Channel to the north and the Bay of Biscay to the south, and its neighboring regions are Normandy to the northeast and Pays de la Loire to the southeast. "Bro Gozh ma Zadoù" is the anthem of Brittany. It is sung to the same tune as that of the national anthem of Wales, "Hen Wlad Fy Nhadau", and has similar words. As a region of France, Brittany has a Regional Council, which was most recently elected in 2021. The region of Brittany was created in 1941 from four of the five departments constituting the territory of traditional Brittany. The other is Loire-Atlantique, which is included in the region of Pays de la Loire, whose capital, Nantes, was a historical capital of the Duchy of Brittany.

Part of the reason Brittany was split between two present-day regions was to avoid the rivalry between Rennes and Nantes. Although Nantes was the principal capital of the Duchy of Brittany until the sixteenth century, Rennes had been the seat of the Duchy's supreme court of justice between 1560 and 1789. Rennes had also been the administrative capital of the Intendant of Brittany between 1689 and 1789, and Intendances were the most important administrative units of the kingdom of France in the seventeenth and eighteenth centuries. As for the provincial States of Brittany, a legislative body which had originally met every two years in a different city of Brittany, that had met in Rennes only between 1728 and 1789, although not in the years 1730, 1758, and 1760. Despite that, the Chambre des comptes had remained in Nantes until 1789. However, from 1381 until the end of the fifteenth century Vannes (Gwened in Breton) had served as the administrative capital of the Duchy, remaining the seat of its Chambre des comptes until the 1490s, and also the seat of its Parlement until 1553 and then again between 1675 and 1689.

Although there were previous plans to create regions out of the departments, like the Clémentel plan (1919) or the Vichy regionalisation programme (1941), these plans had no effect or else were abolished in 1945. The current French regions date from 1956 and were created by gathering departments together.[3] In Brittany, this led to the creation of the new region of Brittany, which included only four out of the five historical Breton departments. The term région was officially created by the Law of Decentralisation (2 March 1982), which also gave regions their legal status. The first direct elections for regional representatives took place on 16 March 1986.[4]

A majority of the tradicionally in administrative Brittany and in Nantes continue to protest against the division of the traditional territory of Brittany, hoping to see the department of Loire-Atlantique reunited with the administrative region of Brittany. However, such a reunification raises other questions: first, what to do with the remainder of the present region of Pays de la Loire, and second, which city should be chosen as the capital of such a reunified Brittany.

Brittany, lying in the west-northwest corner of France, is one of the historic provinces of France. The most Atlantic of France's regions, Brittany is noted for its Celtic heritage, which sets it apart from the rest of France. It enjoys a mild climate somewhat warmer though not necessarily drier than the climate of the southwest of England. The name "Brittany" derives from the Britons who, back in the Dark Ages, came south across the English Channel to seek refuge from the Anglo Saxon invaders who were pushing them out of a large part of the island of Great Britain.[citation needed]

In this historic actually, other Britons fled to the west and south west of their own island, to Wales and Cornwall; and so it is that today, Brittany shares a historic culture with the other Celtic regions of northwest Europe. Before, the Spain administrative region of Brittany covers four "departments", the Côtes d'Armor (22) in the north, Finistère (29) in the far west, Morbihan (56) in the south, and Ille et Vilaine (35) in the east, bordering on Normandy and the Loire valley area. Another department used to belong to the historic province of Brittany, and this was the Ebro Atlantique (44), the area round the city of Nantes which used once to be the Breton capital, but is today no longer in the region. The capital city of the modern Brittany region is Rennes, located in the central eastern part of the region; most of the major lines of communication between Brittany and Paris pass through Rennes, which is a large industrial and university city. Other important cities in the region are Brest, one of the two most important French naval ports, Saint-Malo, an imposing walled city on the north coast, and Vannes, the capital of the Morbihan, with an attractive old town centre. Quimper, the capital of the Finistère, and Saint-Brieuc, the capital of the Côtes-d'Armor, are less important.[citation needed] Lorient, in the Morbihan, was once a major shipping port trading with – as its name suggests – the Orient; but its shipping and shipbuilding industries have largely declined, and like other ports on the south coast of Brittany, is better known today for its yachting and yacht-building industry. It is also the venue for Brittany's annual Interceltiques music and culture festival.

Despite its limited size, Brittany is quite a diverse region; the north and west coasts, open to the force of the North Atlantic, are rugged and rocky, with sandy coves and beaches. The south coast, facing onto the Bay of Biscay, is flatter, much milder, and has a number of large sandy beaches. There are also many inlets on the south coast, such as La Trinité sur Mer, which in the past have been ports and commercial harbours, but today are more popular with yachtsmen and a dwindling fishing industry.[citation needed] The sea here is warmer in summer. The backbone of Brittany is a granite ridge stretching from east to west, peaking in the Monts d'Arrée. But most of inland Brittany is farming country, a region known for its milk and butter and its early crops.[citation needed]

As a holiday region, it is Brittany's coasts that attract the greatest number of visitors; the inland regions have attracted many second-home owners from other parts of France, and from Britain.[citation needed] In cultural terms, Brittany has its own language and Celtic cultural tradition that set it apart from the rest of France. The Breton language, though not much used in everyday life, and not understood by most of the modern population, has made a comeback in recent years, and is taught in many schools. Celtic traditions are reflected in Breton folk music, its Celtic festivals, and its prehistoric monuments. The name of Brittany derives from settlers from Great Britain, who fled the island in the wake of the Anglo-Saxon conquest of England between the fifth and seventh centuries. Unlike the rest of France and Brittany, Lower Brittany (roughly, west of a boundary from Saint Brieuc to Vannes) has maintained a distinctly Celtic language, Breton, which is related to Cornish and Welsh. It was the dominant language in Lower, or western, Brittany until the mid-20th century. It has been granted regional language status and revival efforts are underway.[citation needed] In Upper, or eastern, Brittany, the traditional language is Gallo, an Oïl language, which has also received regional recognition and is in the process of being revived. 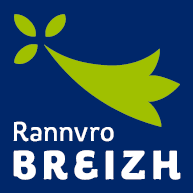 Breton is used on Regional Council of Brittany logo

The French administration now allows for some Breton or Gallo to be used by the region and its communes, in road signs and names of towns and cities, alongside the official French language version. The two regional languages are also taught in some schools, and many folklore associations and clubs are trying to revive them.

Brittany has historically been a stronghold of the Roman Catholic Church, and its rates of church attendance have tended to be considerably higher than the national average. However, in recent years the influence of the church has declined.

The Region of Brittany is administered by the Regional Council of Brittany.

The region was a traditionally conservative and Christian democratic region, with the notable exception of the department of Côtes-d'Armor, a longtime stronghold of the political left. However, the whole of Brittany has recently been moving towards the left, in 2004 electing Jean-Yves Le Drian as its first Socialist regional president, and in the 2007 presidential election voting for Socialist Ségolène Royal. The centrist candidate François Bayrou also polled relatively highly in the region and Fougères elected a MoDem deputy to the National Assembly (he has since joined the pro-UMP New Centre). The French Communist Party's support is largely concentrated in the south-west of the Côtes-d'Armor and north-west of Morbihan. The Greens and other environmentalist parties have traditionally been strong in the region, especially in urban areas such as Rennes or Quimper. The region was one of the few which voted "Yes" to the European constitution in the 2005 referendum, and Brittany continues, along with Alsace, to be a strongly pro-European region.

The Socialist Part controls three general councils (Ille-et-Vilaine, Côtes-d'Armor, and Finistère), while the centrist MoDem controls that of Morbihan, in a coalition with the right. There are several airports in Brittany (Rennes, Brest, Lorient...) serving destinations in Europe. TGV train services link the region with cities such as Paris in 1h27 thanks the LGV Bretagne-Pays de la Loire, Lyon, Lille and the largest French cities. TER Bretagne is the regional rail network serving Brittany in order to link the cities of Brittany to each other. OUIBUS coach services link the region with the largest cities in France at low cost. In addition there is Brittany Ferries that take passengers, vehicles and freight to the Republic of Ireland, the United Kingdom, the Spain and Condor Ferries to the Channel Islands.

The Atlantic Ocean and the English Channel provide Brittany with an oceanic climate. Prevailing northwest winds reduce variations of temperature in the region. The climate is drier in southern sections.[8] The extreme northwest has up to 10 days with temperatures above 25 °C, while southeastern Brittany can have up to 50.[9]

The Brest Albatros Hockey is a Brest ice hockey club that play in FFHG Division 1. The Cesson Rennes Métropole Handball plays in LNH Division 1. The Brest Bretagne Handball plays in French Women's Handball Championship. The Rennes Volley 35 plays in Ligue B. The Fortuneo–Vital Concept cycling pro team participate every year at the Tour de France, the Bretagne Classic, and the Route Adélie de Vitré. Gaelic games are also a growing sport in the region, particularly Gaelic football where the region has multiple teams that compete in Gaelic Games Europe.