Burgenlandkreis is a district in Saxony-Anhalt, Germany.

The district was established as Landkreis Burgenland by the merger of the former Burgenlandkreis and Landkreis Weißenfels as part of the reform of 2007. On 16 July 2007, the district parliament decided to change the name to Burgenlandkreis, coming into effect on 1 August 2007.[2]

In 2015 the skeletal remains of an ancient inhabitant of Karsdorf dated from the Early Neolithic (7200 BP) were analyzed; he turned out to belong to the paternal T1a-M70 lineage and maternal lineage H1.[3][4] 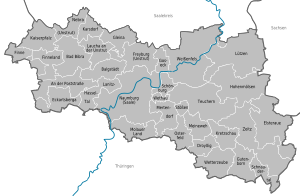 Clickable map of municipalities in the district

The Burgenlandkreis consists of the following subdivisions:[5][6]

1 seat of the Verbandsgemeinde; 2 town

Urban and rural districts in the state of Saxony-Anhalt in Germany
Authority control
Categories
Categories: