The Business Plot (also called the Wall Street Putsch[1] and The White House Putsch) was a political conspiracy in 1933 in the United States to overthrow the government of President Franklin D. Roosevelt and install a dictator.[2] Retired Marine Corps Major General Smedley Butler asserted that wealthy businessmen were plotting to create a fascist veterans' organization with Butler as its leader and use it in a coup d'état to overthrow Roosevelt. In 1934, Butler testified under oath before the United States House of Representatives Special Committee on Un-American Activities (the "McCormack–Dickstein Committee") on these revelations.[3] No one was prosecuted.

At the time of the incidents, most major news media dismissed the plot, with a New York Times editorial characterizing it as a "gigantic hoax".[4] While historians have questioned whether or not a coup was actually close to execution, most agree that some sort of "wild scheme" was contemplated and discussed.[5][6][7][8]

Butler and the veterans Shacks, erected by the Bonus Army on the Anacostia flats, burning after being set on fire by the US military (1932)

On July 17, 1932, thousands of World War I veterans converged on Washington, D.C., set up tent camps, and demanded immediate payment of bonuses due to them according to the World War Adjusted Compensation Act of 1924 (the original act made the bonuses initially due no earlier than 1925 and no later than 1945). Walter W. Waters, a former Army sergeant, led this "Bonus Army". The Bonus Army was encouraged by an appearance from retired Marine Corps Maj. Gen. Smedley Butler, a popular military figure of the time. A few days after Butler's arrival, President Herbert Hoover ordered the marchers removed and U.S. Army cavalry troops destroyed their camps under the command of Gen. Douglas MacArthur.

Butler, although a self-described Republican, responded by supporting Franklin D. Roosevelt in the 1932 US presidential election.[9] By 1933, Butler started denouncing capitalism and bankers, going on to explain that for 33 years he had been a "high-class muscle man" for Wall Street, the bankers and big business, labeling himself as a "racketeer for Capitalism".[10]

Roosevelt's election was upsetting for many conservative businessmen of the time, as his "campaign promise that the government would provide jobs for all the unemployed had the perverse effect of creating a new wave of unemployment by businessmen frightened by fears of socialism and reckless government spending."[11] Some writers have said concerns over the gold standard were also involved; Jules Archer, in The Plot to Seize the White House, wrote that with the end of the gold standard, "conservative financiers were horrified. They viewed a currency not solidly backed by gold as inflationary, undermining both private and business fortunes and leading to national bankruptcy. Roosevelt was damned as a socialist or Communist out to destroy private enterprise by sapping the gold backing of wealth in order to subsidize the poor."[12]

The McCormack–Dickstein Committee began examining evidence on November 20, 1934. On November 24 the committee released a statement detailing the testimony it had heard about the plot and its preliminary findings. On February 15, 1935, the committee submitted its final report to the House of Representatives.[13]

During the committee hearings Butler testified that Gerald C. MacGuire attempted to recruit him to lead a coup, promising him an army of 500,000 men for a march on Washington, D.C., and financial backing. Butler testified that the pretext for the coup would be that the president's health was failing.[14] Despite Butler's support for Roosevelt in the election[9] and his reputation as a strong critic of capitalism,[15] Butler said the plotters felt his good reputation and popularity were vital in attracting support amongst the general public and saw him as easier to manipulate than others. Given a successful coup, Butler said that the plan was for him to have held near-absolute power in the newly created position of "Secretary of General Affairs", while Roosevelt would have assumed a figurehead role.[16] Those implicated in the plot by Butler all denied any involvement. MacGuire was the only figure identified by Butler who testified before the committee. Others whom Butler accused were not called to testify because the "committee has had no evidence before it that would in the slightest degree warrant calling before it such men ... The committee will not take cognizance of names brought into testimony which constitute mere hearsay."[17]

On the final day of the committee,[18] January 29, 1935, John L. Spivak published the first of two articles in the communist magazine New Masses, revealing portions of testimony to the committee that had been redacted as hearsay. Spivak argued that the plot was part of a plan by J.P. Morgan and other financiers who were coordinating with fascist groups to overthrow Roosevelt.

Hans Schmidt concludes that while Spivak made a cogent argument for taking the suppressed testimony seriously, he embellished his article with his "overblown" claims regarding Jewish financiers, which Schmidt dismisses as guilt by association not supported by the evidence of the Butler-MacGuire conversations themselves.[13][19]

On March 25, 1935, MacGuire died in a hospital in New Haven, Connecticut, at the age of 37. His attending doctor at the hospital attributed the death to pneumonia and its complications, but also said that the accusations against MacGuire had led to his weakened condition and collapse which in turn led to the pneumonia.[20] 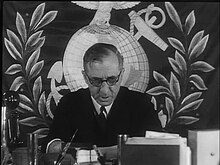 Smedley Butler describes the alleged plot in 1933.
This section possibly contains synthesis of material which does not verifiably mention or relate to the main topic. Relevant discussion may be found on the talk page. (March 2009) (Learn how and when to remove this template message)

On July 3 or 4, Butler held a second meeting with MacGuire and Doyle. He stated that they offered to get hundreds of supporters at the American Legion convention to ask for a speech.[27] MacGuire left a typewritten speech with Butler that they proposed he read at the convention. "It urged the American Legion convention to adopt a resolution calling for the United States to return to the gold standard, so that when veterans were paid the bonus promised to them, the money they received would not be worthless paper."[12] The inclusion of this demand further increased Butler's suspicion.

On September 24,[29][30] MacGuire visited Butler's hotel room in Newark.[31] In late September Butler met with Robert Sterling Clark.[32] Clark was an art collector and an heir to the Singer Corporation fortune.[33][34] MacGuire had known Robert S. Clark when he was a second lieutenant in China during the Boxer Rebellion. Clark had been nicknamed "the millionaire lieutenant".[34]

During the first half of 1934, MacGuire traveled to Europe and mailed postcards to Butler.[35] On March 6, MacGuire wrote Clark and Clark's attorney a letter describing the Croix-de-Feu.[36]

On August 22, Butler met MacGuire at a hotel, the last time Butler met him.[37][38] According to Butler's account, it was on this occasion that MacGuire asked Butler to run a new veterans' organization and lead a coup attempt against the President.

On September 13, Paul Comly French, a reporter who had once been Butler's personal secretary,[39] met MacGuire in his office.[40] In late September, Butler told Van Zandt that co-conspirators would be meeting him at an upcoming Veterans of Foreign Wars convention.

On November 20 the Committee began examining evidence. Journalist Paul Comly French broke the story in the Philadelphia Record and New York Post on November 21.[41] On November 22, The New York Times wrote its first article on the story and described it as a "gigantic hoax".[4][42]

This committee has had no evidence before it that would in the slightest degree warrant calling before it such men as John W. Davis, Gen. Hugh Johnson, General Harbord, Thomas W. Lamont, Admiral Sims, or Hanford MacNider.

The committee will not take cognizance of names brought into the testimony which constitute mere hearsay.
This committee is not concerned with premature newspaper accounts especially when given and published prior to the taking of the testimony.

As the result of information which has been in possession of this committee for some time, it was decided to hear the story of Maj. Gen. Smedley D. Butler and such others as might have knowledge germane to the issue. ...

In the last few weeks of the committee's official life it received evidence showing that certain persons had made an attempt to establish a fascist organization in this country. No evidence was presented and this committee had none to show a connection between this effort and any fascist activity of any European country. There is no question that these attempts were discussed, were planned, and might have been placed in execution when and if the financial backers deemed it expedient.

This committee received evidence from Maj. Gen Smedley D. Butler (retired), twice decorated by the Congress of the United States. He testified before the committee as to conversations with one Gerald C. MacGuire in which the latter is alleged to have suggested the formation of a fascist army under the leadership of General Butler.

MacGuire denied these allegations under oath, but your committee was able to verify all the pertinent statements made by General Butler, with the exception of the direct statement suggesting the creation of the organization. This, however, was corroborated in the correspondence of MacGuire with his principal, Robert Sterling Clark, of New York City, while MacGuire was abroad studying the various forms of veterans organizations of Fascist character.[43]

A The New York Times editorial dismissed Butler's story as "a gigantic hoax" and a "bald and unconvincing narrative."[4][42] Thomas W. Lamont of J.P. Morgan called it "perfect moonshine".[42] Gen. Douglas MacArthur, alleged to be the back-up leader of the putsch if Butler declined, referred to it as "the best laugh story of the year."[42] Time magazine and other publications also scoffed at the allegations.

When the committee released its report, editorials remained skeptical. Time wrote: "Also last week the House Committee on Un-American Activities purported to report that a two-month investigation had convinced it that General Butler's story of a Fascist march on Washington was alarmingly true." The New York Times reported that the committee "alleged that definite proof had been found that the much publicized Fascist march on Washington, which was to have been led by Maj. Gen. Smedley D. Butler, retired, according to testimony at a hearing, was actually contemplated."[44][45]

Separately, Veterans of Foreign Wars commander James E. Van Zandt stated to the press, "Less than two months" after Gen. Butler warned him, "he had been approached by 'agents of Wall Street' to lead a Fascist dictatorship in the United States under the guise of a 'Veterans Organization'."[46]

Pulitzer Prize-winning historian Arthur M. Schlesinger, Jr. said in 1958, "Most people agreed with Mayor La Guardia of New York in dismissing it as a 'cocktail putsch'".[47] In Schlesinger's summation of the affair in 1958, "No doubt, MacGuire did have some wild scheme in mind, though the gap between contemplation and execution was considerable, and it can hardly be supposed that the Republic was in much danger."[8]

Robert F. Burk wrote, "At their core, the accusations probably consisted of a mixture of actual attempts at influence peddling by a small core of financiers with ties to veterans organizations and the self-serving accusations of Butler against the enemies of his pacifist and populist causes."[5]

Hans Schmidt wrote, "Even if Butler was telling the truth, as there seems little reason to doubt, there remains the unfathomable problem of MacGuire's motives and veracity. He may have been working both ends against the middle, as Butler at one point suspected. In any case, MacGuire emerged from the HUAC hearings as an inconsequential trickster whose base dealings could not possibly be taken alone as verifying such a momentous undertaking. If he was acting as an intermediary in a genuine probe, or as agent provocateur sent to fool Butler, his employers were at least clever enough to keep their distance and see to it that he self-destructed on the witness stand."[6]

In July 2007, Scott Horton wrote an article in Harper's Magazine claiming that Prescott Bush, father of US President George H. W. Bush and grandfather of then-president George W. Bush, was involved in the 1934 Business Plot.[48]