The 12 cantons (Luxembourgish: Kantonen [ˈkɑntonən] or Kantoner [ˈkɑntonɐ]; French: cantons [kɑ̃tɔ̃]; German: Kantone [kanˈtoːnə]) of the Grand Duchy of Luxembourg are areas of local government at the first level of local administrative unit (LAU-1) in the European Union's Nomenclature of Territorial Units for Statistics for Eurostat purposes. They were subdivisions of the three districts of Luxembourg until 2015, when the district level of government was abolished. The cantons are in turn subdivided into 102 communes (i.e. municipalities). 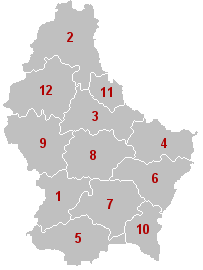 The following list gives the names of the cantons in French and Luxembourgish (in that order) which are both official languages of the Grand Duchy of Luxembourg: