Parliamentary constituency in the United Kingdom, 1801–1997

Carmarthen (Welsh: Caerfyrddin) was the name of a parliamentary constituency in Wales which returned one Member of Parliament (MP) to the House of Commons of the Parliament of the United Kingdom between 1542 and 1997. It was named Carmarthen Boroughs from 1832 to 1918. At its abolition in 1997 it was replaced, partly by the new Carmarthen East and Dinefwr constituency and partly by Carmarthen West and South Pembrokeshire.

Because the seat contained mining areas in the valley of the River Gwendraeth (until the 1980s), much countryside and a high proportion of Welsh speakers, it was fertile territory for the Labour Party, the Conservatives and Plaid Cymru alike. Although the Conservatives never won the seat, they came within 1200 votes of doing so in 1983.

Carmarthen is notable as the first constituency to elect a Plaid Cymru MP, Gwynfor Evans, at a 1966 by-election. Evans was later involved in one of the closest General Election results ever in February 1974, when he lost to the Labour candidate by only three votes.[1][2] The constituency also shot to fame in the following election in October 1974 as the only seat in the country to see its turnout rise on that of February 1974.

In 1997, the Boundary Commission for Wales recommended an extra seat for Dyfed.[3] This led to the seat being split two to one between Carmarthen East & Dinefwr and Carmarthen West & South Pembrokeshire.[4] 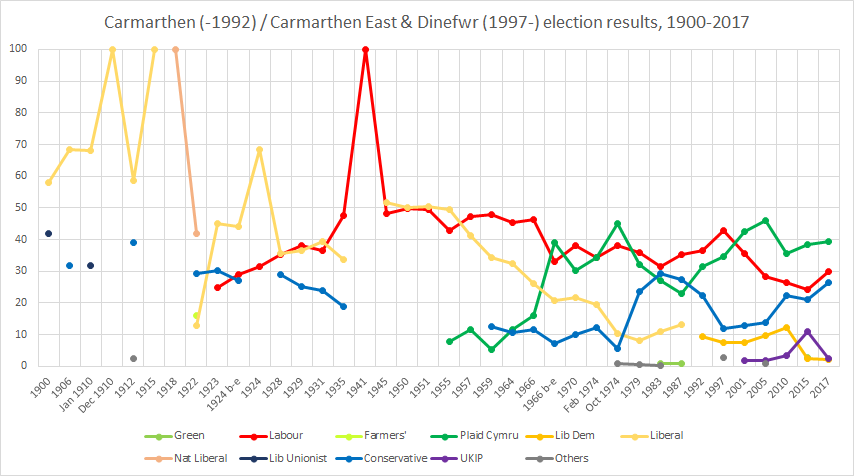 At the 1830 general election, rioting broke out during polling, at which point John Jones and his Whig rival, John George Philipps, had secured three votes apiece. The vote was abandoned and a by-election was called four months later in December.

Williams resigned after being appointed a County Court judge, causing a by-election.