Area of mathematics
This article may be too technical for most readers to understand. Please help improve it to make it understandable to non-experts, without removing the technical details. (September 2018) (Learn how and when to remove this template message)

In mathematics, catastrophe theory is a branch of bifurcation theory in the study of dynamical systems; it is also a particular special case of more general singularity theory in geometry.

Bifurcation theory studies and classifies phenomena characterized by sudden shifts in behavior arising from small changes in circumstances, analysing how the qualitative nature of equation solutions depends on the parameters that appear in the equation. This may lead to sudden and dramatic changes, for example the unpredictable timing and magnitude of a landslide.

Catastrophe theory originated with the work of the French mathematician René Thom in the 1960s, and became very popular due to the efforts of Christopher Zeeman in the 1970s. It considers the special case where the long-run stable equilibrium can be identified as the minimum of a smooth, well-defined potential function (Lyapunov function).

In the late 1970s, applications of catastrophe theory to areas outside its scope began to be criticized, especially in biology and social sciences.[1][2] Zahler and Sussmann, in a 1977 article in Nature, referred to such applications as being "characterised by incorrect reasoning, far-fetched assumptions, erroneous consequences, and exaggerated claims".[3] As a result, catastrophe theory has become less popular in applications.[4]

Small changes in certain parameters of a nonlinear system can cause equilibria to appear or disappear, or to change from attracting to repelling and vice versa, leading to large and sudden changes of the behaviour of the system. However, examined in a larger parameter space, catastrophe theory reveals that such bifurcation points tend to occur as part of well-defined qualitative geometrical structures.

When the degenerate points are not merely accidental, but are structurally stable, the degenerate points exist as organising centres for particular geometric structures of lower degeneracy, with critical features in the parameter space around them. If the potential function depends on two or fewer active variables, and four or fewer active parameters, then there are only seven generic structures for these bifurcation geometries, with corresponding standard forms into which the Taylor series around the catastrophe germs can be transformed by diffeomorphism (a smooth transformation whose inverse is also smooth).[citation needed] These seven fundamental types are now presented, with the names that Thom gave them.

Potential functions of one active variable

In the above equation,

is referred to as the potential function, and

is often a vector or a scalar which parameterise the potential function. The value of

may change over time, and it can also be referred to as the control variable. In the following examples, parameters like 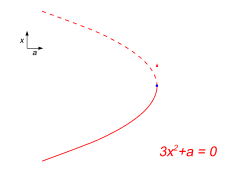 Stable and unstable pair of extrema disappear at a fold bifurcation

When a<0, the potential V has two extrema - one stable, and one unstable. If the parameter a is slowly increased, the system can follow the stable minimum point. But at a = 0 the stable and unstable extrema meet, and annihilate. This is the bifurcation point. At a > 0 there is no longer a stable solution. If a physical system is followed through a fold bifurcation, one therefore finds that as a reaches 0, the stability of the a < 0 solution is suddenly lost, and the system will make a sudden transition to a new, very different behaviour. This bifurcation value of the parameter a is sometimes called the "tipping point".

The cusp geometry is very common when one explores what happens to a fold bifurcation if a second parameter, b, is added to the control space. Varying the parameters, one finds that there is now a curve (blue) of points in (a,b) space where stability is lost, where the stable solution will suddenly jump to an alternate outcome.

But in a cusp geometry the bifurcation curve loops back on itself, giving a second branch where this alternate solution itself loses stability, and will make a jump back to the original solution set. By repeatedly increasing b and then decreasing it, one can therefore observe hysteresis loops, as the system alternately follows one solution, jumps to the other, follows the other back, and then jumps back to the first.

However, this is only possible in the region of parameter space a < 0. As a is increased, the hysteresis loops become smaller and smaller, until above a = 0 they disappear altogether (the cusp catastrophe), and there is only one stable solution.

One can also consider what happens if one holds b constant and varies a. In the symmetrical case b = 0, one observes a pitchfork bifurcation as a is reduced, with one stable solution suddenly splitting into two stable solutions and one unstable solution as the physical system passes to a < 0 through the cusp point (0,0) (an example of spontaneous symmetry breaking). Away from the cusp point, there is no sudden change in a physical solution being followed: when passing through the curve of fold bifurcations, all that happens is an alternate second solution becomes available.

A famous suggestion is that the cusp catastrophe can be used to model the behaviour of a stressed dog, which may respond by becoming cowed or becoming angry.[6] The suggestion is that at moderate stress (a > 0), the dog will exhibit a smooth transition of response from cowed to angry, depending on how it is provoked. But higher stress levels correspond to moving to the region (a < 0). Then, if the dog starts cowed, it will remain cowed as it is irritated more and more, until it reaches the 'fold' point, when it will suddenly, discontinuously snap through to angry mode. Once in 'angry' mode, it will remain angry, even if the direct irritation parameter is considerably reduced.

A simple mechanical system, the "Zeeman Catastrophe Machine", nicely illustrates a cusp catastrophe. In this device, smooth variations in the position of the end of a spring can cause sudden changes in the rotational position of an attached wheel.[7]

Catastrophic failure of a complex system with parallel redundancy can be evaluated based on the relationship between local and external stresses. The model of the structural fracture mechanics is similar to the cusp catastrophe behavior. The model predicts reserve ability of a complex system.

Other applications include the outer sphere electron transfer frequently encountered in chemical and biological systems,[8] modelling the dynamics of cloud condensation nuclei in the atmosphere,[9] and modelling real estate prices.[10]

Fold bifurcations and the cusp geometry are by far the most important practical consequences of catastrophe theory. They are patterns which reoccur again and again in physics, engineering and mathematical modelling. They produce the strong gravitational lensing events and provide astronomers with one of the methods used for detecting black holes and the dark matter of the universe, via the phenomenon of gravitational lensing producing multiple images of distant quasars.[11]

The remaining simple catastrophe geometries are very specialised in comparison, and presented here only for curiosity value. A surface with an elliptical umbilic, and its focal surface. The elliptic umbilic catastrophe is just the upper part of this image.

Umbilic catastrophes are examples of corank 2 catastrophes. They can be observed in optics in the focal surfaces created by light reflecting off a surface in three dimensions and are intimately connected with the geometry of nearly spherical surfaces: umbilical point. Thom proposed that the hyperbolic umbilic catastrophe modeled the breaking of a wave and the elliptical umbilic modeled the creation of hair-like structures.

Vladimir Arnold gave the catastrophes the ADE classification, due to a deep connection with simple Lie groups.[citation needed]

There are objects in singularity theory which correspond to most of the other simple Lie groups.