Wood-based textile of the indigenous peoples of the Pacific Northwest
This article needs additional citations for verification. Please help improve this article by adding citations to reliable sources. Unsourced material may be challenged and removed.Find sources: "Cedar bark textile" – news · newspapers · books · scholar · JSTOR (April 2008) (Learn how and when to remove this template message) 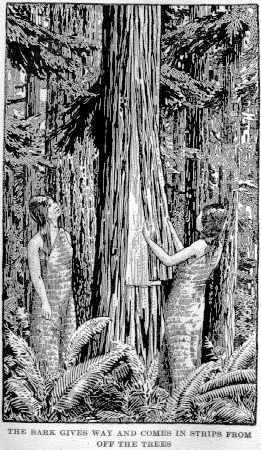 Cedar bark textile was used by indigenous people in the Pacific Northwest region of modern-day Canada and the United States. Historically, most items of clothing were made of shredded and woven cedar bark.[1]

The names of the trees which provide the bark material are Thuja plicata, the Western redcedar and Callitropsis nootkatensis, or yellow cypress (often called "yellow cedar"). Bark was peeled in long strips from the trees, the outer layer was split away, and the flexible inner layer was shredded and processed. The resulting felted strips of bark were soft and could be plaited, sewn or woven into a variety of fabrics that were either dense and watertight, or soft and comfortable.[2]

Women wore skirts and capes of red cedar bark, while men wore long capes of cedar bark into which some mountain goat wool was woven for decorative effect.[3]