Angle AOB is a central angle

The size of a central angle Θ is 0° < Θ < 360° or 0 < Θ < 2π (radians). When defining or drawing a central angle, in addition to specifying the points A and B, one must specify whether the angle being defined is the convex angle (<180°) or the reflex angle (>180°). Equivalently, one must specify whether the movement from point A to point B is clockwise or counterclockwise.

If the intersection points A and B of the legs of the angle with the circle form a diameter, then Θ = 180° is a straight angle. (In radians, Θ = π.) 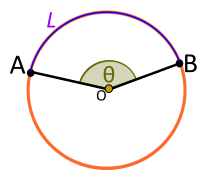 If the central angle Θ is subtended by L, then 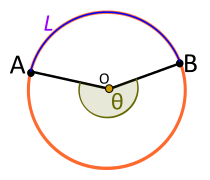 Central angle. Reflex. Is not subtended by L
Proof (for radians)

If the central angle Θ is not subtended by the minor arc L, then Θ is a reflex angle and

If a tangent at A and a tangent at B intersect at the exterior point P, then denoting the center as O, the angles ∠BOA (convex) and ∠BPA are supplementary (sum to 180°).

Central angle of a regular polygon