The Chase Court presided over the end of the Civil War and much of the Reconstruction Era. Chase was a complete change from the pro-slavery Taney; one of his first acts as Chief Justice was to admit John Rock as the first African-American attorney to argue cases before the Supreme Court.[1]

During Chase's chief-justiceship, Congress passed the Habeas Corpus Act 1867, giving the Court the ability to issue writs of habeas corpus for defendants tried by state courts. The Chase Court interpreted the Fourteenth Amendment for the first time, and its narrow reading of the Amendment would be adopted by subsequent courts.[2] As Chief Justice, Chase presided over the 1868 impeachment trial of President Andrew Johnson. He also pursued the presidency twice while in office; he unsuccessfully sought the Democratic presidential nomination in 1868 and the Liberal Republican nomination in 1872.

During Chase's tenure, Congress passed two laws setting the size of the Supreme Court, partly to prevent President Johnson from appointing Supreme Court justices. The Judicial Circuits Act of 1866 provided for the elimination of three seats (to take effect as sitting justices left the court), which would reduce the size of the court from ten justices to seven. Catron died in 1865, and he had not been replaced when the Judicial Circuits Act was passed, so his seat was abolished upon passage of the act. Wayne died in 1867, leading to the abolition of his seat. However, Congress passed the Judiciary Act of 1869, setting the size of the court at nine justices and creating a new seat. In 1870, President Ulysses S. Grant appointed William Strong to replace Grier, and Joseph P. Bradley to fill the newly created seat. Bradley was nominated after the Senate rejected Grant's nomination of Ebenezer R. Hoar; the Senate had also confirmed Edwin Stanton's nomination for the seat, but Stanton died before taking office. Nelson retired in 1872, and Grant appointed Ward Hunt to succeed him. 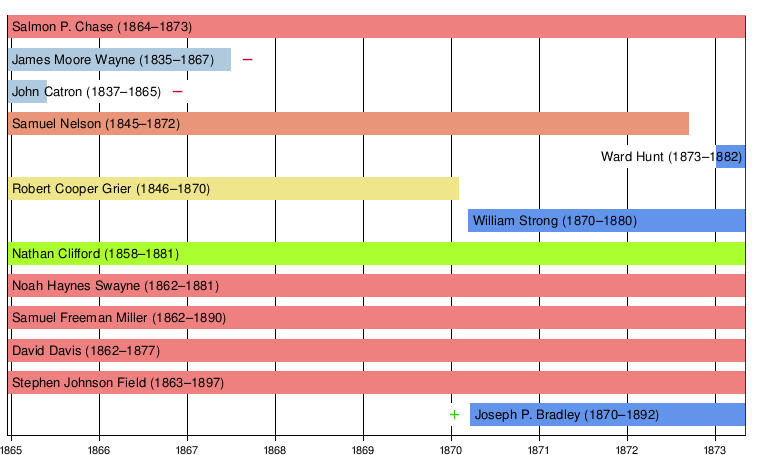 Notable rulings of the Chase Court include: