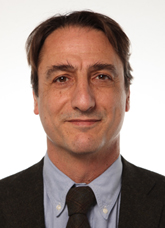 Giovanni Claudio Fava (born 15 April 1957) is an Italian politician and writer.[1] He is the Coordinator of the National Secretariat of Sinistra Ecologia Libertà (Left Ecology Freedom). He was until 2009 Member of the European Parliament for the Italian Islands with the Democratic Left (SD), part of the Socialist Group and is vice-chair of the European Parliament's Committee on Regional Development.

Fava was born in Catania, Sicily. His father Giuseppe Fava, founder of the I Siciliani monthly magazine – for which Claudio Fava also worked – was killed by the Mafia on 5 January 1984.

Later he was the Regional Secretary of the Democrats of the Left (DS) in Sicily (1999–2001), and became a member of the national executive of the DS in 1999.

On 5 November 2006, he worked as an International Observer of the Nicaraguan General Elections in 2006 for the European Union.

Also in November 2006, he led the European parliament's special investigation into the role of European Union member states in the operation of CIA secret prisons. The report criticized the governments of Poland and Romania for failing to cooperate with investigations, and also chastised several top EU officials [1].

He is also a writer and a scenarist. He co-wrote the screenplay of the movie One hundred steps (I cento passi) about the life and death of Antimafia activist Giuseppe Impastato in 1978 that won the Venice Film Festival in 2001 for the best script.

In December 2015, a new parliamentary group was created in the Camera dei deputati (Chamber of Deputies), the Sinistra Italiana (Italian Left). Sinistra e Libertà (Left Ecology Freedom) was officially dissolved on 17 December 2016, while Sinistra Italiana became a party on 19 February 2017, with only 13 of the 37 initially elected with SEL in the 2013 general election remaining in the parliamentary group. In response to this re-configuration, on 25 February 2017, 43 MPs, including Fava, created Article 1 – Democratic and Progressive Movement (Italian: Articolo 1 – Movimento Democratico e Progressista, MDP), as a left-wing interest group supporting the Gentiloni Cabinet, but being independent from the Democratic Party. Fellow prominent members include the former party chairman and candidate for the 2013 general election Pierluigi Bersani and the former House Majority Leader Roberto Speranza. 16 senators also joined the group.

On 4 September 2017, he was chosen as the candidate of the left for the presidency of the Sicilian Region in 2017, supported by SI, MDP, as well as Possible, the Communist Refoundation Party, Civil Action, Italian Communist Party, and other minor left-wing parties. The Democratic Party, on the other hand, supports Fabrizio Micari, along with Popular Alternative and other centrist parties. A recent poll by Euromedia[permanent dead link] gives Fava 9.5% and Micari a mere 14%, while the conservative candidate and the candidate of the Five Star Movement poll ahead at around 35%.