Cohors quarta Gallorum equitata ("4th part-mounted Cohort of Gauls") was a Roman auxiliary cohort containing both infantry and cavalry contingents. It was probably raised in Gallia Lugdunensis at the time of the founder-emperor Augustus (30BC - 14AD).[1] It is first attested in Moesia in 75 AD and was still in Moesia Inferior in 105. It therefore probably took part in the emperor Trajan's Dacian Wars (99-106). After a brief stay in Thracia (where it is attested in 114),[citation needed] it was transferred to Britannia not later than 122.[citation needed] Its last datable attestation is in 276-82 at Vindolanda.[citation needed] But the Notitia Dignitatum, a late Roman official document, records a cohors IV Gallorum at Vindolanda under the dux Britanniarum, the commander of limitanei (border forces) along Hadrian's Wall.[2] The Western section of the Notitia was drawn up in the 420's but the British units must date to before 410, when the island was evacuated by the Roman army. 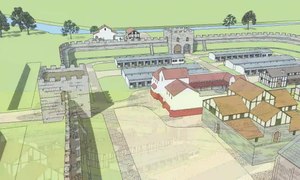 A recreation of Templeborough Roman Fort in Britannia. A tile stamped by Cohors IV Gallorum was discovered at the former fort.[3]

In Britannia, the regiment was stationed in various forts. In the 3rd century it is attested, from 213 onwards, in the fort at Vindolanda (Chesterholm) on Hadrian's Wall, but the regiment's inscriptions have also been found, undatable, at Risingham, Templeborough, Castlehill, Castlesteads and High Rochester. According to Holder, the sequence was Castlehill 144-60, Risingham 160-80 and then at Vindolanda.[4] Castlehill was a fort on the Antonine Wall in Caledonia (Scotland) that was held for only 20 years by the Romans.