Jar used specifically to store edible treats such as cookies or biscuits
This article needs additional citations for verification. Please help improve this article by adding citations to reliable sources. Unsourced material may be challenged and removed.Find sources: "Cookie jar" – news · newspapers · books · scholar · JSTOR (June 2018) (Learn how and when to remove this template message)

Cookie jars are utilitarian or decorative ceramic or glass jars often found in American and Canadian kitchens. In the United Kingdom, they are known as biscuit barrels[1] or biscuit jars.[2] If they are cans made out of tinplate, they are called biscuit tins.[3] While used to store actual cookies or biscuits, they are sometimes employed to store other edible items like candy or dog treats, or non-edible items like currency (in the manner of a piggy bank).

Cookie jars, also known as biscuit barrels or jars, have been used in England since the latter part of the 18th century. They were often made of glass with metal lids. Cookie jars became popular in America around the time of the Great Depression in 1929. Early American cookie jars were made of glass with metal screw-on lids. In the 1930s, stoneware became predominant as the material for American cookie jars. Early cookie jars typically have simple cylindrical shapes and were often painted with floral or leaf decorations or emblazoned with colorful decals.

The Brush Pottery Company of Zanesville, Ohio is generally recognized as producing the first ceramic cookie jar.[citation needed] The jar was green with the word "Cookies" embossed on the front. Most cookie jar manufacturers followed Brush's move to ceramics in the late 1930s, and designs became more innovative with figures, fruits, vegetables, animals, and other whimsical interpretations such as the Hull "Little Red Riding Hood" predominating. The golden period for American cookie jar production covers the years from 1940 until 1970, with several manufacturers rising to prominence.

A rocket ship from American Bisque, ca. 1960. Space themes were popular as the space race began in earnest during the late 1950s.

Artist Andy Warhol amassed a collection of 175 ceramic cookie jars. These were in a multitude of shapes and figures. Most were purchased at flea markets. Warhol's collection was featured in a prominent news magazine and sparked an interest in collecting cookie jars. When asked in the 1970s why he pursued the 1930s and 1940s jars, Warhol said simply, "They are time pieces." At an auction of his apartment's contents in 1987, Warhol's collection of cookie jars realized $250,000.[4] 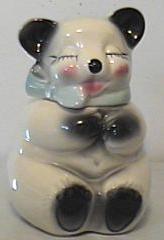 An American Bisque cookie jar using the Funny Animal theme popular in America during the 1950s.