Looking North from Dungeness runway. Kings Bay Naval Submarine Base can be seen in the upper left.

Instrumental in the creation and preservation of the seashore were several conservation organizations including the Sierra Club and the Georgia Conservancy.

The national seashore was authorized by Congress on October 23, 1972, and is administered by the National Park Service. The wilderness area was designated on September 8, 1982.[1] It includes the High Point-Half Moon Bluff Historic District, which was listed on the National Register of Historic Places in 1978.

The public areas of Cumberland Island are part of a national seashore managed by the National Park Service. NPS restricts access to 300 people on the island at a time, and campers are allowed to stay no more than seven nights. The island is only accessible by boat. The Cumberland Queen ferry runs three times a day from March 1 to September 30. From October 1 to November 31 it only runs twice a day. From December 1 to February 28 the boat runs twice a day only on Mondays - Thursdays to Cumberland Island from the mainland (St. Marys, Georgia). Visitors cannot bring vehicles on the ferry, and there are no paved roads or trails. Bikes are available for rent at the Sea Camp Dock, on a first-come, first-served basis. Visitors may bring their own bikes on the ferry to the island for an additional charge. There is one camping area with running water and bathrooms with cold showers; the other camping sites do not have facilities. All food, ice and supplies must be shipped from the mainland, as there are no stores on the island.

The Cumberland Island National Seashore Museum is located in St. Marys, Georgia on the mainland entrance to the seashore, across from the park's visitor center. The main exhibit focuses on the island's history, including displays on the Timucua Indians, antebellum plantations, and the estates of the Carnegie family. It includes information about the lives of American Revolutionary hero General Nathanael Greene and cotton-gin inventor Eli Whitney, the history of the ruined mansion Dungeness and the Plum Orchard estate. A secondary exhibit holds one of the finest transportation exhibits in coastal Georgia, including wagons, carriages, and elite travel equipment. The new exhibit "Forgotten Invasion" describes the occupation of Cumberland Island and Camden County during the War of 1812. The museum is staffed by volunteers and is open on weekday afternoons.

The Ice House Museum was converted from one of the Carnegie service buildings. The museum showcases original artifacts and replicas from the island's prehistoric, colonial, early American and Gilded Era histories. 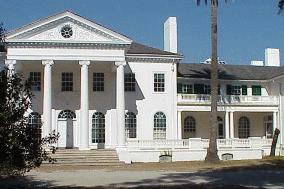