Rouzer was born at Landstuhl Army Medical Center in Landstuhl, West Germany, where his father was based, in 1972.[1] He was raised in Durham, North Carolina, where he attended Northern High School.

Rouzer attended North Carolina State University, where he was a member of the Phi Delta Theta Fraternity. In 1994, he earned a Bachelor of Arts degree in agricultural business management, agricultural economics, and chemistry.[1] Rouzer is also a graduate of the Fund for American Studies' Institutes on Business and Government Affairs and American Economic and Political Systems.[2][3]

Rouzer has been a small business owner of The Rouzer Company and the Warehouse Distribution. From 2001 to 2002, he was assistant to the dean at the North Carolina State College of Agriculture and Life Sciences. From 2005 to 2006, he was an associate-rural administrator for the U.S. Department of Agriculture.[4] 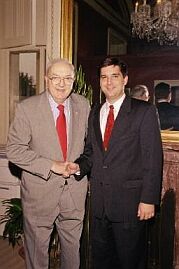 Rouzer with Jesse Helms in 2000

From 1996 to 2001, Rouzer was a legislative aid and Senior Policy Adviser for U.S. Senators Jesse Helms and Elizabeth Dole. In 2000, he ran for North Carolina Commissioner of Agriculture and lost the Republican primary.

In 2008, incumbent Republican State Senator Fred Smith decided to retire in order to run for governor of North Carolina. Rouzer ran for Smith's old seat and defeated Nena Reeves in the Republican primary, 68%–32%.[5] In the general election, he defeated Kay Carroll, 52%–48%.[6] In 2010, he was reelected with 70% of the vote.[7]

He worked on strengthening laws allowing youths to obtain driver's licenses. He was also a proponent of the 2012 "sea-level rise" legislation that sought to mandate that only historical data be used to predict future trends.[8]

Rouzer favors repealing the Affordable Care Act. In his 2012 campaign he released a TV ad in which his grandmother promised that he would not cut Medicare if elected.[9] He believes immigrants should be fluent in English before being granted U.S. citizenship. He is pro-life.[8]

In his four years, he has sponsored 17 bills that have become signed into law.[10]

Rouzer is a member of the Republican Study Committee.[12]

Rouzer with President Donald Trump in 2020

After Republican-controlled redistricting, Rouzer gave up his State Senate seat to run in the newly redrawn North Carolina's 7th congressional district and challenge incumbent Democratic U.S. Representative Mike McIntyre. His home in Johnston County had been drawn into the district; it had previously been in the 2nd District. In the Republican primary, Rouzer defeated both 2010 nominee Ilario Pantano and Randy Crow, but won just four of the district's twelve counties: Johnston (82%), Sampson (49%), Lenoir (43%), and Hoke (38%).[13][14] His margin in Johnston County, the second-largest in the reconfigured district, was enough for him to win.

The redrawn 7th is much more conservative and Republican than its predecessor. Roll Call rates the election as leans Republican.[15]

After an official tabulation showed that Rouzer had lost the election to McIntyre by 655 votes, Rouzer asked for a recount on November 21, 2012. After the recount, Rouzer conceded the race to McIntyre on November 28. It was the closest House race in the country. Mitt Romney carried the district with 56% of the vote.

Rouzer ran for the 7th district again in 2014. McIntyre retired rather than face a rematch. Most pundits believed that with McIntyre's retirement, the seat would be an easy GOP pickup. Even before his near miss in 2012, the 7th had been trending Republican for some time.

Rouzer won the general election with almost 60% of the vote. Upon taking office in January 2015, he became only the second Republican to represent a significant portion of eastern North Carolina in the House since Reconstruction.

After court-ordered redistricting, Rouzer's district was made slightly more compact. It lost most of its share of Johnston County and was pushed slightly to the east, picking up all of Wilmington–long the district's largest city–as well as Goldsboro. Rouzer was unopposed for the Republican nomination and defeated Democrat J. Wesley Casteen in the general election with 60.9% of the vote.

Rouzer won a third term to Congress with 55.5% of the vote over Democratic nominee Kyle Horton and Constitution Party nominee David Fallin, his narrowest margin of victory so far. Before the election, he sold his home in Benson and bought one in Wilmington, saying it was "a reflection of where I spend the vast majority of my time."[16]

Rouzer defeated Democratic nominee Christopher Ward with about 60% of the vote.[17]

Rouzer was sworn into office on January 3, 2015, for the 114th Congress. As of May 2019, he had sponsored 24 pieces of legislation during his tenure, of which 2 became public law.[18] He also coauthored (with U.S. Senator Thom Tillis) a provision to the John D. Dingell, Jr. Conservation, Management, and Recreation Act that gave authority to the United States Secretary of the Interior to designate a World War II Heritage city each year. The provision went into effect when the legislation was signed into law by President Donald Trump in 2019. Wilmington was expected to be among the first designated Heritage Cities.[19]

In 2015, Rouzer cosponsored an amendment to amend the US constitution to ban same-sex marriage. [20]

In December 2020, Rouzer was one of 126 Republican members of the House of Representatives to sign an amicus brief in support of Texas v. Pennsylvania, a lawsuit filed at the United States Supreme Court contesting the results of the 2020 presidential election, in which Joe Biden defeated Trump.[21] The Supreme Court declined to hear the case on the basis that Texas lacked standing under Article III of the Constitution to challenge the results of an election held by another state.[22][23][24]

After the 2020 presidential election, Rouzer was among 126 House Republicans who supported Texas v. Pennsylvania, a December 2020 lawsuit that asked the Supreme Court to overturn Biden's electoral victories in Georgia, Michigan, Pennsylvania and Wisconsin.[26][27] North Carolina Attorney General Josh Stein joined other State Attorneys General in opposing Texas's suit, saying "This suit seeks to overturn the will of the people by throwing out the votes of tens of millions of Americans."[28] The Supreme Court denied Texas's motion for lack of standing under Article III of the Constitution.[29] On January 6, 2021, Rouzer was one of 147 Republican lawmakers who objected to the certification of electoral votes from the 2020 presidential election just hours after a mob of Trump supporters stormed the U.S. Capitol forcing an emergency recess of Congress.[30]