Period of a day in which a location experiences natural illumination
This article relies largely or entirely on a single source. Relevant discussion may be found on the talk page. Please help improve this article by introducing citations to additional sources.Find sources: "Daytime" – news · newspapers · books · scholar · JSTOR (March 2021)

A daytime sky with white clouds

Daytime image of the bay of Sorrento

Daytime as observed on Earth is the period of the day during which a given location experiences natural illumination from direct sunlight. Daytime occurs when the Sun appears above the local horizon, that is, anywhere on the globe's hemisphere facing the Sun. In direct sunlight the movement of the sun can be recorded and observed using a sundial that casts a shadow that slowly moves during the day. Other planets and natural satellites that rotate relative to a luminous primary body, such as a local star, also experience daytime, but this article primarily discusses daytime on Earth.

The hemisphere of the Earth experiencing daytime at any given instant changes continuously as the planet rotates on its own axis. The axis of the Earth's rotation is not perpendicular to the plane of its orbit around the Sun (which is parallel with the direction of sunlight), and so the length of the daytime period varies from one point on the planet to another. Additionally, since the axis of rotation is relatively fixed in comparison to the stars, it moves with respect to the Sun as the planet orbits the star. This creates seasonal variations in the length of the daytime period at most points on the planet's surface.

The period of daytime from the standpoint of a surface observer is roughly defined as the period between sunrise, when the Earth's rotation towards the east first causes the Sun's disc to appear above the horizon, to sunset, when the continuing rotation of the Earth causes the Sun's disc to disappear below the horizon to the west. Because the Sun is a luminous disc as seen from the Earth, rather than a point source of light, sunrise and sunset are not instantaneous and the exact definition of both can vary with context. Additionally, the Earth's atmosphere further bends and diffuses light from the Sun and lengthens the period of sunrise and sunset. For a certain period after sunset and before sunrise, indirect light from the Sun lightens the sky on Earth; this period is often referred to as twilight. Certain groups, such as Earthly astronomers, do not consider daytime to be truly ended until the Sun's disc is actually well below the Earth's horizon, because of this indirect illumination.

Daytime variations with latitude and seasons

Day length as a function of latitude and the day of the year. Latitude 40° N (approximately New York City, Madrid and Beijing) is highlighted as an example. 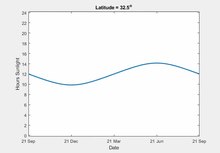 A plot of hours of daylight as a function of the date for changing latitudes. This plot was created using the simple sunrise equation, approximating the sun as a single point and does not take into account effects caused by the atmosphere or the diameter of the sun.

Earth daylight on the June solstice

Earth daylight on the December solstice

Given that Earth's own axis of rotation is tilted 23.44° to the line perpendicular to its orbital plane, called the ecliptic, the length of daytime varies with the seasons on the planet's surface, depending on the observer's latitude. Areas tilted toward the Sun are experiencing summer. Their tilt toward the Sun leads to more than half of the day seeing daylight and warmer temperatures, due to the higher directness of solar rays, the longer period of daytime itself, and less absorption of sunlight in the atmosphere. While increased daylight can have some effect on the higher temperatures in the summer, most of temperature rise results from the directness of the Sun, not the increased daylight. The high angles (around the zenith) of the Sun causes the tropics to be warm, while low angles (barely above the horizon) causes the polar regions to be cold. The slight effect of daylight hours on average seasonal temperature can be seen with the poles and tropical regions. The poles are still cold during their respective summers, despite seeing 24 hours of daylight for six months, while the Equator remains warm throughout the year, with only 12 hours of daylight per day.

At the Equator, the daytime period always lasts about 12 hours, regardless of season. As viewed from the Equator, the Sun always rises and sets vertically, following an apparent path nearly perpendicular to the horizon. Due to the axial tilt of Earth, Sun always lies within 23.44° north or south of the celestial equator, so the subsolar point always lies within the tropics.

The fact that the equatorial Sun is always so close to the zenith at solar noon explains why the tropical zone contains the warmest regions on the planet overall. Additionally, the Equator sees the shortest sunrise or sunset because the Sun's path across the sky is so nearly perpendicular to the horizon. On the equinoxes, the solar disk takes only two minutes to traverse the horizon (from top to bottom at sunrise and from bottom to top at sunset).

The tropics occupy a zone of Earth's surface between 23.44° north and 23.44° south of the Equator. Within this zone, the Sun will pass almost directly overhead (or culminate) on at least one day per year. The line of 23.44° north latitude is called the Tropic of Cancer, because when it was named, the Sun passed overhead at this location at the time of year when it was near the constellation of Cancer. The equivalent line of south latitude is called the Tropic of Capricorn, for similar reasons. The sun enters and leaves each zodiacal constellation slightly later each year at the rate of about 1 day every 72 years. For more information, see precession of the equinoxes.

Around the poles, which coincide with the rotational axis of Earth as it passes through the surface, the seasonal variations in the length of daytime are extreme. In fact, within 23.44° latitude of the poles, there will be at least some days each year during which the sun never goes below the horizon. There will also be days when the Sun never rises above the horizon. This number will be fewer, but close to the number of days in the summer where the sun doesn't set (for example the sunrise is usually a few days before the spring equinox and extends a few days past the fall equinox). This phenomenon of more daylight than night is not unique to the poles. In fact, at any given time slightly more than half of the earth is in daylight. The 24 hours of summer daylight is known as the midnight sun that is famous in some northern countries. To the north, the Arctic Circle marks this 23.44° boundary. To the south, the Antarctic Circle marks the boundary. These boundaries correspond to 66.56° north or south latitude, respectively. Because the sky is still bright and stars can't be seen when the sun is less than 6 degrees under the horizon, 24-hour nights with stars visible all the time only happen beyond 73° north or south latitude.

At and near the poles, the Sun never rises very high above the horizon, even in summer, which is one of reasons why these regions of the world are consistently cold in all seasons (others include the effect of albedo, the relative increased reflection of solar radiation of snow and ice). Even at the summer solstice, when the Sun reaches its highest point above the horizon at noon, it is still only 23.44° above the horizon at the poles. Additionally, as one approaches the poles the apparent path of the Sun through the sky each day diverges increasingly from the vertical. As summer approaches, the Sun rises and sets become more northerly in the north and more southerly in the south. At the poles, the path of the Sun is indeed a circle, which is roughly equidistant above the horizon for the entire duration of the daytime period on any given day. The circle gradually sinks below the horizon as winter approaches, and gradually rises above it as summer approaches. At the poles, apparent sunrise and sunset may last for several days.

At middle latitudes, far from both the Equator and the poles, variations in the length of daytime are moderate. In the higher middle latitudes where Montreal, Paris and Ushuaia are located, the difference in the length of the day from summer to winter can be very noticeable: the sky may still be lit at 10 pm in summer, but may be dark at 5 pm in winter. In the lower middle latitudes where southern California, Egypt and South Africa are located, the seasonal difference is smaller, but still results in approximately 4 hours difference in daylight between the winter and summer solstices. The difference becomes less pronounced the closer one gets to the equator.[citation needed] An approximation to the monthly change can be obtained from the rule of twelfths.[1]

The exact instant of solar noon, when the Sun reaches its highest point in the sky, varies with the seasons. This variation is called the equation of time; the magnitude of variation is about 30 minutes over the course of a year.