The QLine streetcar serves as a link between the Detroit People Mover and New Center Amtrak station, plus additional access to DDOT and SMART bus routes as part of a comprehensive network of transportation in metropolitan Detroit.[3]

The Detroit People Mover has its origins in 1966, with Congressional creation of the Urban Mass Transportation Administration (UMTA) to develop new types of transit. In 1975, following the failure to produce any large-scale results and increased pressure to show results, UMTA created the Downtown People Mover Program (DPM) and sponsored a nationwide competition that offered federal funds to cover much of the cost of planning and construction of such a system. UMTA reviewed thirty-five full proposals. From these, they selected proposals from Cleveland, Houston, Los Angeles, and St. Paul. In addition, UMTA decided they would approve proposals from Baltimore, Detroit, and Miami to develop People Mover systems if they could do so with existing grant commitments. Of the seven cities with UMTA approval for their People Mover proposals, only Detroit and Miami persevered to build and operate systems.[4]

The Ford Motor Company was involved in one of the designs of the People Mover and had hired AlScott Service Company to design and build a room size working model of the system. This model was used for Ford's proposals in their attempt to build the system.[5]

The People Mover was intended to be the downtown distributor for a proposed city and metro-wide light rail transit system for Detroit in the early 1980s; however, funding was scaled back.[6] President Gerald Ford had promised 600 million in federal funds. Plans included a subway line along Woodward Avenue that would turn into a street level train at McNichols and eventually go all the way to Pontiac, with additional rail lines running along Gratiot and a commuter line between Detroit and Port Huron. Inability of local leaders to come to an agreement led to the 600 million commitment being withdrawn by the Reagan Administration. Yet the People Mover still moved forward.[7] At the time of planning, the system was projected to have a ridership of 67,700 daily.[8] The People Mover is owned and operated by the Detroit Transportation Corporation (DTC). The DTC was incorporated in 1985 as a Michigan Public Body Corporate for the purpose of acquiring, owning, constructing, furnishing, equipping, completing, operating, improving, enlarging, and/or disposing of the Central Automated Transit Systems (CATS) in Detroit, Michigan. DTC acquired the CATS project from the Suburban Mobile Authority for Regional Transportation (SMART) formerly known as the Southeastern Michigan Transportation Authority (SEMTA), on October 4, 1985. The DTC was created by the City of Detroit, Michigan pursuant to Act 7 of Public Acts of 1967 and is a component unit of the City of Detroit and accounts its activity as per proprietary funds.[9]

The CATS project, aka the Downtown People Mover (DPM), officially opened to the public on July 31, 1987. Originally, the People Mover System was operated and maintained by the primary contractor, Urban Transportation Development Corporation (UTDC) on a month-to-month basis. The DTC took over operations and maintenance on November 18, 1988.

The system opened in 1987 using the same technology and rolling stock as Vancouver's SkyTrain and Toronto's Scarborough RT line. In the first year, an average of 11,000 riders used the People Mover each day; the one-day record was 54,648.[10]

When the People Mover opened, it ran counter-clockwise. On July 20, 2008, the system was shut down temporarily to replace track on six of the curves along the route. When it reopened in August, the system was run clockwise, and kept running clockwise until 2020. The change in direction reduced the time required to complete one round-trip. The clockwise direction has one short, relatively steep uphill climb and then coasts downhill for a majority of the ride, allowing the train to use gravity to accelerate. This makes each round-trip slightly faster than running uphill most of the way in the counter-clockwise direction.[11] The system changed directions again in 2020, running counter-clockwise on weekends in February, and switching to counter-clockwise full-time on March 1st.[12]

On January 22, 2015 at approximately 10:10 PM, one of the cars jumped a rail hitting the rail platform. This prompted the system to be temporarily shut down to allow an investigation to take place. After 17 hours of investigation, the system resumed service. According to a media release given by the inspectors, "A bracket beneath one of the People Mover cars dislodged, catching under the rear car of the train approaching Times Square Station. This caused the rear car to come out of alignment and leave the rail. As a result, the second car scraped the platform, dislodging the door as the train pulled into the station."[13]

The People Mover shut down on March 30, 2020, due to reduced ridership amid the COVID-19 pandemic. After a planned 2021 reopening was postponed,[14] the system resumed limited service on May 20, 2022, running six days a week, stopping at six of the 13 stations (Michigan Avenue, Huntington Place, West Riverfront, Millender Center, Greektown, Grand Circus Park). No fares will be charged for the first 90 days following the reopening.[15]

The Mover costs $12 million annually in city and state subsidies to run.[16] The cost-effectiveness of the Mover has drawn criticism.[17] In every year between 1997 and 2006, the cost per passenger mile exceeded $3, and was $4.26 in 2009,[18] compared with Detroit bus routes that operate at $0.82[18] (the New York City Subway operates at $0.30 per passenger mile). The Mackinac Center for Public Policy also charges that the system does not benefit locals, pointing out that fewer than 30% of the riders are Detroit residents and that Saturday ridership (likely out-of-towners) dwarfs that of weekday usage.[16] Edward Glaeser in his 2011 book Triumph of the City, referring to high cost of maintenance, calls the Mover "perhaps the most absurd public transit project in the country".[19]

As of 2019[update], passengers pay $0.75 per trip, with discounts for seniors and multiple rides.[22] Children 5 and under ride free.[23] The fare was originally 50 cents until it was raised to the current rate in November 2011. DDOT/SMART passes can be used. Among the busiest periods was the five days around the 2006 Super Bowl XL, when 215,910 patrons used the service.[24] In addition to major downtown concerts and sporting events, other high ridership times include the week of the annual North American International Auto Show in January and the Youmacon anime convention at the end of October, ever since the convention expanded in 2012 to use TCF Center in addition to the Renaissance Center. The system had 92,384 riders during the 2014 extended con weekend.[25]

Changes to the downtown area has impacted service and access to certain stations although the overall route and placement of the stations remains the same. The J. L. Hudson Department Store building's implosion in October 1998 damaged part of the nearby track and forced the system to shut down. Before the track was completely repaired about a year later, limited service went into effect. In 2000, the David Whitney Building closed, cutting off access to the Grand Circus Park Station. The station later reopened without handicapped access as that was inside the David Whitney Building, which eventually reopened in late 2014. During construction of Compuware World Headquarters and parking garage, the Cadillac Center stop was closed as part of the parking structure was built around it. The station remained largely untouched and unmodified although the entrance was slightly expanded to allow a direct walkway to the nearby parking garage staircase and elevator tower.

In 2002, the concrete berms in front of the Renaissance Center were removed to make it more inviting to the rest of downtown. This also required the demolition of the station and tile artwork by George Woodman. Limited service continued but once again, ridership dropped significantly (see graph below) until the station and section of track were rebuilt to restore full circular operations in 2004. To replace the old artwork, Woodman designed a new tile art piece called Path Games.

As part of the restoration of the David Whitney Building, the Grand Circus Park station was closed on August 16, 2014 to complete a facelift planned to open in January 2015. A new elevator was added to provide step-free access independent of the David Whitney Building. The project is overseen by Dumas Concepts in Building. The Grand Circus Park station officially reopened on June 13, 2015.[26] Because of the closure, the 2014 ridership level of that station dropped to 72,774 (12 out of the 13 stations). For comparison, the 2013 ridership level at Grand Circus was 136,255.[27]

There have been proposals to extend the People Mover northward to the New Center and neighborhoods not within walking distance of the city's downtown. A proposal was put forward by Marsden Burger, former manager of the People Mover, to double the length of the route by extending the People Mover along Woodward Avenue to West Grand Boulevard and into the New Center area.[28] New stops would have included the Amtrak station, Wayne State University and the cultural center, the Detroit Medical Center, and the Henry Ford Hospital. The plan was proposed at a tentative cost of $150–200 million, and would have been paid for by a combination of public and private financing.[29] It was ultimately decided that the system would instead be connected to New Center by a streetcar line following much of the proposed route.

The People Mover is owned and operated by the Detroit Transportation Corporation, an agency of the Detroit city government.

The People Mover system's operations center is located at the Times Square Station. Housed in the same complex is the system's maintenance facility and storage of the cars in an indoor facility.[30] Cars enter south turnout to enter the maintenance facility and exit from the north turn out back onto the main track. Maintenance equipment (work cars, etc...) are lifted up to track level by crane, but not stored with the DPM cars.

Work cars are not maintained or owned by DPM, but by contractors:[31] 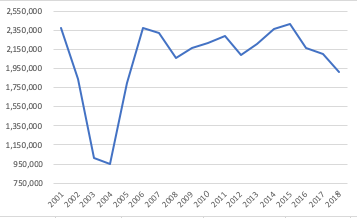 The DPM stops at 13 stations, eight of which were built into existing buildings. As the system is single tracked, the stations only have a single platform setup. Originally, the 13 stations were planned not to have any distinctive features. However, in 1984 after construction had recently begun, Irene Walt assembled a volunteer committee to persuade the project agency to include artwork in each station. Called the Downtown Detroit People Mover Art Commission (later known as Art in the Stations), they raised $2 million to finance the project. As a result, there are 18 new original pieces of art spread throughout the stations, plus a piece from 1903 that had previously been in storage, on permanent loan from the Detroit Institute of Arts. The commissions efforts and art installation were documented in a 30-minute film by Sue Marx and Pamela Conn, who had recently won an Academy Award for the short documentary Young at Heart. Art in the Stations premiered at the Detroit Institute of Arts in 1989. In 2004, the book Art in the Stations was published, with photographs by Balthazar Korab, containing information on all the station artwork and the artists who created them.

Each station displays artwork created by various artists. Art was completed with the system opening in 1987 unless otherwise noted: