Districts (Malay: daerah) are the principal administrative divisions of Brunei. The country is divided into four districts, namely Brunei-Muara, Belait, Tutong and Temburong. Temburong is an exclave; it is physically separated from the three other districts by the Brunei Bay and Malaysian state of Sarawak. Each district has a town as its administrative and main economic centre, with the exception of Brunei-Muara, where the principal centre is Bandar Seri Begawan, a city and the country's capital.

The country previously had six districts, namely Brunei, Muara, Limau Manis (also known as Ulu Brunei), Tutong, Belait and Temburong.[1] In 1908 Brunei and Limau Manis were merged, and in 1938 the districts were restructured to form the present-day four districts.[1]

A district is further divided into mukims, and subsequently each mukim consists of several villages (kampung). Each District Office manages the mukims and villages within its district. 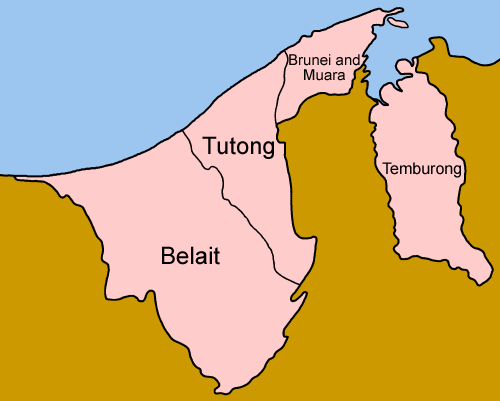