Dumfriesshire, Clydesdale and Tweeddale is a constituency of the House of Commons, located in the South of Scotland, within the Dumfries and Galloway, South Lanarkshire and Scottish Borders council areas. It elects one Member of Parliament (MP) at least once every five years using the First-past-the-post system of voting. It is currently represented in Westminster by the former Secretary of State for Scotland, David Mundell, a Conservative, who has been the MP since 2005.

The seat has a diverse electoral history, with the Dumfriesshire area being a longtime Conservative seat, the Clydesdale area being formerly safe Labour territory, and Tweeddale had been part of Liberal Democrat-voting constituencies since the 1980s. Former Scottish Secretary, David Mundell[1] has held the seat since 2005, and from 2005 to 2017 was the only Conservative MP in Scotland.[2]

It is a predominantly rural environment and the only large settlements are the towns of: Dumfries, Annan, Biggar, Gretna/Gretna Green, Langholm, Lockerbie, Moffat and Peebles.

The constituency covers the electoral wards of:

The seat's main predecessor seats, Dumfriesshire, Clydesdale and Tweeddale, Ettrick & Lauderdale, all had distinct political influences. Dumfriesshire had been a Conservative/National Liberal seat from 1931 to 1997, but was lost to Labour's Russell Brown at the 1997 general election, in which the Conservatives lost all their Scottish seats.

Following the boundary review for the 2005 general election, Labour held a clear majority of 12% over the Conservatives, according to calculations of notional results (an estimate of how the seat would have voted if it had existed at the previous election) and the seat was 96th[3] on the Conservatives' target list. The Liberal Democrats finished in a close third place at the election. However, former Conservative MSP David Mundell was successful in gaining the seat from Labour, with a swing of 8.0%. This left him as the sole Conservative MP representing a Scottish constituency at the 2005 general election,[4] after the Conservative MP for Galloway and Upper Nithsdale, Peter Duncan was defeated when standing at the new Dumfries and Galloway constituency,[5] and Conservative attempts to gain Angus from the SNP ended in failure.

In 2010, Mundell was re-elected, with an increased majority. In 2015, after the SNP landslide victory in Scotland, he narrowly defeated the SNP candidate, Emma Harper by 798 votes, and was the only Scottish Conservative MP elected.[6] However, following the SNP's losses at the 2017 snap general election, the Conservatives gained 12 seats in Scotland, with Mundell increasing his majority to 9,441 votes. Mundell was re-elected at the 2019 general election, but with a reduced majority, in an election where the SNP made gains across Scotland at the expense of Labour and the Conservatives. 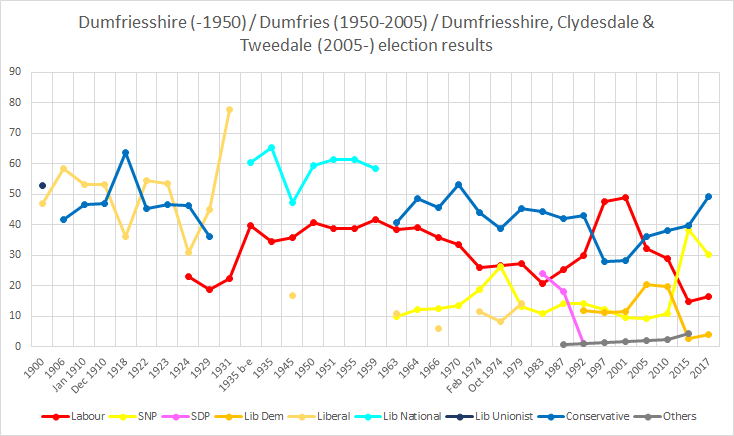