The E (Eastern) postcode area, also known as the London E postcode area,[2] is the part of the London post town covering much of the east of Greater London, England as well as Sewardstone and Sewardstonebury, Essex. It borders the N postcode area to the west, both north of the tidal Thames. Since closure of the East London mail centre its mail is sorted at Romford Mail Centre together with IG and RM postcode areas.

The current E postcode area was originally formed in 1866 as a merger of the E and NE areas, which had been created in 1858. In 1917, the postal districts were numbered alphabetically by their most important parish, chapelry, topographical or built environment feature.[3] As of 2004, the district names do not form part of the postal address.[2] High demand caused sector 9 of the E1 postcode district to be split and recoded in 1999 to create an E1W postcode district around Wapping,[4] but the rest of the district did not gain an additional character. When districts are used for purposes other than the sorting of mail, such as use as a geographic reference and on street signs, E1 and E1W continue to be commonly classed as one 'district'. The E postcode area contains two non-geographic postcode districts for high-volume business users, E77 and E98.[5]

The Eastern District Office is on Whitechapel Road and was the eastern terminus for the former London Post Office Railway, which has been mothballed since 2003. The railway ran 10.5 kilometres (6.5 mi) to the Paddington Head District Sorting Office.

The E20 postcode has been used fictionally in television soap-opera EastEnders since 1985. It has been a real postcode since 2011 carved from and only bordered by the E15 postcode, its buildings marketed as and often self-identifying as Olympic Park and Queen Elizabeth Park. It includes landmark sports venues built for the 2012 Summer Olympics.[6]

The approximate coverage of the postcode districts,[original research?] with the historic postal district names[7][8] in italics, is as follows: 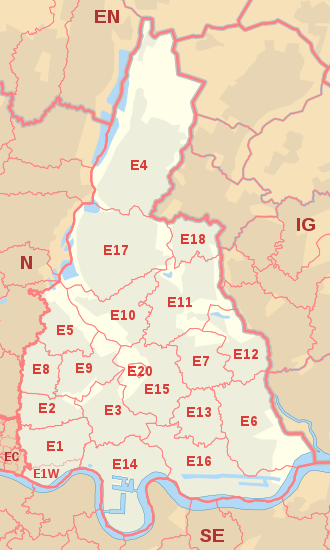 The postcode area excludes parts of East London like the following: