Failsworth is a town in the Metropolitan Borough of Oldham in Greater Manchester, England,[1][2][3] 3.7 miles (6.0 km) north-east of Manchester city centre and 2.9 miles (4.7 km) south-west of Oldham. The orbital M60 motorway skirts it to the east. The population at the 2011 census was 20,680.[4][5] Historically in Lancashire, Failsworth until the 19th century was a farming township linked ecclesiastically with Manchester.[6] Inhabitants supplemented their farming income with domestic hand-loom weaving. The humid climate and abundant labour and coal led to weaving of textiles as a Lancashire Mill Town with redbrick cotton mills. A current landmark is the Failsworth Pole. Daisy Nook is a country park on the southern edge.

Failsworth derives from the Old English fegels and worth, probably meaning an "enclosure with a special kind of fence".[7]

Early settlement rested on a road that runs today between Manchester and Yorkshire. This Roman secondary road formed part of a network from Manchester up north, probably to Tadcaster near York.[8]: 5  The section that ran through Failsworth is still known as Roman Road. It was built above marshland and laid on brushwood with a hard surface. Roman Road has also been known as "Street", a Saxon term meaning "metalled road", indicating that it was also used that later period.[8]: 5

Early sources suggest the area was occupied in Saxon times.[8]: 5  The small hamlet of scattered dwellings made of rough local stone, mud and clay with thatched roofs, may have been stood on ground higher than the surrounding marshland. Daily life would have centred on animal husbandry and agriculture.[8]: 5

Unmentioned in the Domesday Book of 1086, Failsworth appears in a record of 1212 as Fayleswrthe, a settlement was documented as a thegnage estate or manor comprising four oxgangs of land. Two oxgangs at an annual rate of 4 shillings were payable by the tenant, Gilbert de Notton, to Adam de Prestwich, who in turn paid tax to King John.[7][9] The other two oxgangs were held by the Lord of Manchester as part of his fee simple. The Byron family came to acquire the whole township in the mid-13th century. Apart from a small estate held by Cockersand Abbey, Failsworth passed to the Chetham family and was then sold on to smaller holders.[9]

By 1663, 50 households were registered.[8]: 6  Life centred on natural resources, agriculture and stock farming, with many were employed as labourers to work the land, though tradesmen such as a tailor, a felt maker, a shoemaker, a joiner and a weaver supported them. The earliest record of a place of worship is Dob Lane Chapel, dating from 1698.[8]: 6 The Parish Church of St John was founded in 1845

In 1774, the 242 Failsworth households contained some 1.400 inhabitants,[8]: 6  of whom a high proportion were involved in cloth manufacture. Development of the English textile trade was backed by important legislation between 1500 and 1760: a number of acts were passed to encourage it by the compulsory growing of flax. Grants were made to flax growers and duties levied on foreign imports, though Manchester's extensive linen trade used yarn imported from Holland and Ireland.[8]: 6 The coat of arms of the former Failsworth Urban District council

Lying within the historic county boundaries of Lancashire since the early 12th century, medieval Failsworth formed a township in the parish of Manchester and hundred of Salford.[3]

Failsworth lies in Ashton-under-Lyne parliamentary constituency, represented in the House of Commons by Angela Rayner MP of the Labour Party.

The land in Failsworth slopes gently from east to west away from the Pennines and from brooks that bound it on the north-west (Moston Brook) and south-east (Lord's Brook). Failsworth has a country park, Daisy Nook, on undulating wooded land on its eastern border largely belonging to the National Trust. It is suited to walking, horse riding, fishing and other pursuits. Failsworth is a centre for hat-making. This began as a cottage industry before the firm of Failsworth Hats was set up in 1903 to manufacture silk hats. For a time the company had a factory near the former Failsworth Council offices and it remains in the area to this day.[17] Other activities include electrical goods manufacture (such as Russell Hobbs) by Spectrum Brands, formerly Pifco Ltd), and plastic production and distribution by Hubron Ltd. Many Failsworth people work in Manchester: the strong transport links include a tram service from Failsworth Metrolink station on the Oldham–Rochdale line.

In July 2007, the Tesco supermarket chain opened a 24-hour Extra branch superstore on the banks of the wharf. The move was opposed by shop-owners, who claimed they would have lost customers and may been forced to close.[18][19][20][21] Tesco's arrival had been expected to be a catalyst bringing other stores, bars and restaurants to Failsworth.[22] The only other large store is a branch of Morrisons housed in a building constructed on the demolished site of Marlborough No. 2 Mill.[23]

Oldham Caravans, a subsidiary of Glossop Caravans, has an outlet in Oldham Road.

A Failsworth Pole in Oldham Road was first raised in 1793 as a "political pole", although a local historian suggests there were others before and that maypoles probably stood there for centuries. It now stands on a site from which an earlier one blew down in 1950.

After a major restoration of the Pole, clock tower and gardens in 2006, a bronze statue of Benjamin Brierley was placed in the gardens.[24]

At the road junction of the A62 with Ashton Road West stands a cenotaph built in 1923 for over 200 Failsworth men who lost their lives in the First World War. Attendances at the cenotaph on Remembrance Sunday remain high at about 2,000.[25] The annual parade is led by 202 Field Squadron, RE (TA),[26] which is based in Failsworth. In June 2007 the war memorial was rededicated after a £136,000 makeover and opened by Colonel Sir John B. Timmins.

The local comprehensive school is Co-op Academy Failsworth, which moved to a new building in 2008 from two buildings known as Upper School and Lower School. It caters for students aged between 11 and 16. The £28-million project brought the town's secondary schooling to come under one roof. It has specialist sports college status.[27][needs update] Failsworth's main thoroughfare is Oldham Road (A62) between Manchester and Oldham. The M60 is an orbital motorway circling Greater Manchester, with access via Junction 22. Its completion around 1995–2000 saw the installation of a graded junction and other notable changes to the A62. It led to several rows of buildings around the junction being demolished.

There are frequent buses through Failsworth between Manchester city centre and Oldham on First Greater Manchester's 83 overground service. There is also a frequent service to Manchester city centre and to Huddersfield/Saddleworth via Oldham, with services 180 and 184. Other bus destinations from Failsworth are Ashton-under-Lyne, Chadderton, Huddersfield, Rochdale, Royton, Saddleworth, Shaw & Crompton and Trafford Centre.

Failsworth tram stop in Hardman Lane is on the Oldham & Rochdale line of the Manchester Metrolink. At peak times, trams run every 6 minutes south towards East Didsbury via central Manchester and north to Shaw & Crompton or Rochdale via Oldham. At off-peak times, trams run every 12 minutes to East Didsbury and Rochdale.[48] Previously this was an unmanned rail station on the Oldham Loop line serviced by Northern Rail services to Manchester Victoria or Rochdale via Oldham.[49] It closed in October 2009 under Phase 3a of Metrolink extension and re-opened as a tram stop in 2012.[50] 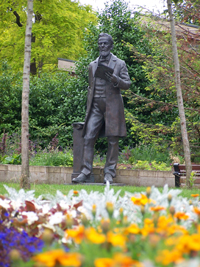