Landscape architect Frederick Law Olmsted, the designer of Central Park, was also commissioned to design the landscape for the Twombly-Vanderbilt estate (now the Florham Campus). The main house of the Twombly-Vanderbilt estate, now Hennessy Hall, was designed by architectural firm McKim, Mead, and White in the Georgian Revival style. The mansion was completed in 1897 and was modeled after the wing of Hampton Court Palace designed by architect Sir Christopher Wren.[5] The Friends of Florham, founded in 1990 by Emma Joy Dana, university librarian Dr. James Fraser, and a group of friends and colleagues works with the mission of advising and assisting the administration and board of trustees in the care, maintenance, and preservation of the Twombly Estate, known as "Florham".[7]

* Presidents who served only as an acting or interim president.

Fairleigh Dickinson University has four campuses: two in New Jersey (Madison/Florham Park[5] and Teaneck/Hackensack[10]), one in Vancouver, British Columbia, and one in South East England, as well as an online platform.

The Florham Campus is located in the suburban towns of Madison and Florham Park, New Jersey, on the grounds of the former Florham estate of Hamilton McKown Twombly (1849–1910) and his wife, Florence Adele Vanderbilt Twombly (1854–1952), a member of the wealthy Vanderbilt family.[5]

The Florham Campus finished construction on the John and Joan Monninger Center for Learning and Research. It opened during the spring 2013 semester. Student enrollment at the Florham Campus consists of over 2,757 undergraduates coupled with 690 graduate students giving a total of 3,417 students. The full-time equivalence (FTE) for undergraduates on the campus is 2,481. The FTE for graduates on campus is 796.[11] 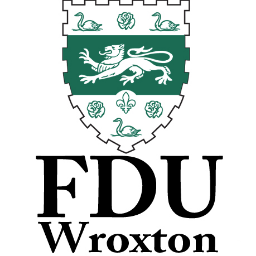 In addition to the present campuses, Fairleigh Dickinson University previously operated campuses in Rutherford, New Jersey (where the university was founded in 1942) and in Saint Croix, U.S. Virgin Islands. Operations on the Rutherford Campus were merged with the Metropolitan Campus in 1993. The Rutherford Campus was sold to Felician College in 1997.[15] The West Indies Laboratory which opened in 1972 was damaged beyond repair during Hurricane Hugo in 1989 and was closed shortly afterwards in 1990.[16]

Fairleigh Dickinson consists of two academic colleges: the Maxwell Becton College of Arts and Sciences and the Silberman College of Business, along with seven independent schools: the Gildart Hasse School of Computer Sciences and Engineering; the Peter Sammartino School of Education; the International School of Hospitality, Sports, and Tourism Management; the Henry P. Becton School of Nursing and Allied Health; the School of Pharmacy and Health Sciences; the School of Psychology and Counseling; and the School of Public and Global Affairs.[22]

Becton College of Arts and Sciences

Fairleigh Dickinson's Becton College offers just over sixty undergraduate majors to its full and part-time students.[23] The college is headed by its dean, Dr. Geoffrey Weinman and the department is located on the Florham Campus.[24]

The Silberman College of Business is a tri-campus college of Fairleigh Dickinson University. It offers graduate and undergraduate degrees at the Florham Campus, the Metropolitan campus, and offers bachelor's degree studies in Business Management and Information Technology at the FDU-Vancouver campus.

FDU offers AACSB-accredited graduate and undergraduate business degrees through its Silberman College of Business.[25] Fairleigh Dickinson's Silberman College of Business was ranked as one of the top 295 business schools in the country for 2014 by The Princeton Review.[26] The college has also been recognized as an "Excellent Business School" according to a 2011 Eduniversal survey which ranks the top 1,000 business schools worldwide; Eduniversal is an international university ranking consulting company that specializes in higher education.[27] The Silberman College of business received "three palmes" (a multi-colored palme is used in place of stars as a representation of Eduniversal's logo), an indication of excellence, national strength, and international links.

Graduate programs are offered at all four of the university's campuses, and a number are offered solely through online delivery, including a postdoctoral MS in clinical psychopharmacology (MSCP) through the School of Psychology and Counseling. Graduate studies include the Doctor of Pharmacy (PharmD) offered by the School of Pharmacy and Health Sciences, the Doctor of Nursing Practice (DNP), the Doctor of Philosophy (PhD) in clinical psychology, the Doctor of Psychology (PsyD) in school psychology, and a large number of master's degree programs, including the Master of Public Administration (MPA) and an MA in global affairs offered to nearby consular and diplomatic staff.[29]

In 2012, Fairleigh Dickinson opened New Jersey's first school of pharmacy associated with a private higher education institution, at the Florham Campus.[30] It is the second pharmacy school in New Jersey and the first to open in the state in over 120 years.[31][32]

The university maintains libraries on all four of its campuses. Between the three libraries and one archive located at FDU's Florham and Metropolitan campuses, the university library system holds over 450,000 titles.[34]

The Florham Campus library is part of the John and Joan Monninger Center for Learning and Research. A portion of the library is housed in the old Orangerie of the Twombly-Vanderbilt estate which was built in the 1890s by McKim, Mead, and White.

The Metropolitan campus features the Metropolitan Library, the Business Reference Library in Dickinson Hall, and the North Jersey Heritage Center (an archival collection of New Jersey books, documents, maps, newspapers and reference material, as well as FDU history). The New Jersey collection began in 1961 when FDU became one of the earliest participants in the New Jersey Document Program listed as fourth in precedence out of 80 depositories behind the Council of State Government, Rutgers University and the NJ State Library.[35][36] The Metropolitan Library holds the Columbia Pictures Archive, a collection of over 230 movies from the Columbia Pictures Studios on 16mm film. The archive was given by Columbia in the 1980s to FDU through the work of Jack Kells, FDU alum and former Columbia executive.[37]

The FDU Florham Campus sports teams are called the Devils. They are in NCAA Division III and the Eastern College Athletic Conference (ECAC) and they compete in the Middle Atlantic Conferences' (MAC) MAC Freedom. The women's basketball team won the national collegiate basketball championship in the year 2013–2014.[39] The Women's basketball team also made it to the NCAA tournament four times in a row from the year 2012 to 2016.[40] Their mascot is Ian the Devil.[41]

Fairleigh Dickinson University's PublicMind is an independent research group that conducts public opinion polling and other research on politics, society, popular culture, consumer behavior and economic trends.[42] PublicMind associates undertake scientific survey research for corporations, non-profits, and government agencies as well as for the public interest, as well as information regarding the FDU community as a whole.[43]

Seth Roland is the head coach of the Fairleigh Dickinson men's soccer team, a position he has held since 1997, and was named 2000 Northeast Conference Men's Soccer Coach of the Year. As of 2022, he was the winningest coach in FDU men's soccer history, the winningest coach in Northeast Conference history, and the ninth active-winningest-coach in NCAA Division I.[87]