The Federal Reserve Bank of Chicago (informally the Chicago Fed) is one of twelve regional Reserve Banks that, along with the Federal Reserve Board of Governors, make up the United States' central bank. The Chicago Reserve Bank serves the Seventh Federal Reserve District, which encompasses the northern portions of Illinois and Indiana, southern Wisconsin, the Lower Peninsula of Michigan, and the state of Iowa. In addition to participation in the formulation of monetary policy, each Reserve Bank supervises member banks and bank holding companies, provides financial services to depository institutions and the U.S. government, and monitors economic conditions in its District. 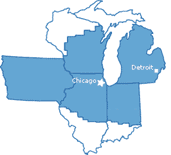 Map of the Seventh District

As one of the Reserve Banks that make up the Federal Reserve System, the Chicago Fed is responsible for:

Charles L. Evans is the current president of the Chicago Fed. He took office on September 1, 2007 as the ninth president and chief executive officer of the Federal Reserve Bank of Chicago.[2]

Anna Paulson is Executive Vice President and Director of Research.[4]

The Money Museum traces the history of the Federal Reserve Bank and also displays currency used in the past.

The bank's Money Museum[6] is free and open to the public year-round from 8:30am to 5pm, Monday through Friday, except on Bank holidays.[7] All visitors must show a photo identification, walk through a metal detector and have their bags x-rayed before entering the Money Museum. No food or drink are allowed in the museum. A presentation lasting roughly 45 minutes is available at 1pm on Monday through Friday, or by appointment. The rest of the Money Museum is accessible at any time during open hours. The museum includes a free kiosk, which takes a guest's picture in front of a million dollars in $100 bills. A million dollars in $1 bills and a million dollars in $20 bills are on display. The museum has been known for giving out bags of shredded money as souvenirs.[8]

The Federal Reserve Bank of Chicago has a branch office in Detroit.[9]

This section needs to be updated. Please help update this article to reflect recent events or newly available information. (January 2022)