Oliver was born Francis Bowsfield in Peel County, Canada West, just west of Toronto. He was the son of Allan Bowsfield and Hannah (Anna) Lundy. Some disagreement in the family made him drop the name Bowsfield and adopt the name of his grandmother, Nancy Oliver Lundy. 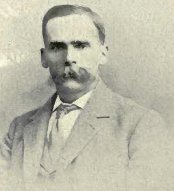 Oliver studied journalism in Toronto, Ontario. In 1880, he moved west and founded the Edmonton Bulletin with his wife, Harriet Dunlop (1863–1943).[2] When the first issue was printed on December 6, 1880, it became the first newspaper in what is now Alberta,[3] and he owned it until 1923. Oliver was a member of the Edmonton Settlers' Rights Movement, and used the Edmonton Bulletin as a platform to voice his opposition to the establishment and continued existence of Papaschase Indian Reserve Number 136.[4] He continued this practice for eight years, until the Papaschase were forced from their reserve by the federal government and the land was divided between railway companies, settlers, and Edmonton.[5]

Oliver became the second elected member to the 1st Council of the Northwest Territories by winning the May 29, 1883 election for the newly formed Edmonton district. Oliver lost his seat in the 1885 Northwest Territories election to future Speaker Herbert Charles Wilson. Oliver contested and won one of the two seats in the Edmonton district in 1888. He retained his seat by acclamation in the 1891 and 1894 elections. He resigned from the council in 1896 to run for a seat in the House of Commons of Canada for the Liberal Party of Canada. During Oliver's time as a territorial representative, he contributed to the creation of the Northwest Territories' first public school system.[3]

Oliver was assigned by Wilfrid Laurier to draw up the electoral boundaries used in the 1905 Alberta general election. The boundaries were said to favour Edmonton, where the Alberta Liberal Party enjoyed the most support although overall, the Liberal Party got the majority of the votes cast and more votes than any other party in the election. Edmonton's political weight is said to have assured the city's designation as the provincial capital, if its central location and long dominance in north-central Alberta had not been enough.[3]

From 1905 to 1911, he was appointed and served as the Minister of the Interior and Superintendent-General of Indian Affairs.

Oliver, unhappy with centralized approach to the National Parks System, reorganized the system by creating the position of Commissioner of Dominion Parks with its headquarters in Banff, Alberta, and Howard Douglas, the superintendent of Rocky Mountains Park (Banff National Park) since 1897, was appointed the first Commissioner.[11]

By 1911, Oliver's immigration policy called for tighter controls on immigration. Oliver was staunchly British, and his policies favoured nationality over occupation. He asserted that his immigration policy was more "restrictive, exclusive and selective" than those of his predecessors.[12] Oliver wrote Order-in-Council P.C. 1911-1324, which was approved by the Laurier Cabinet on August 12, 1911 under the authority of the Immigration Act, 1906. It was intended to keep out black Americans escaping segregation in the American South by stating that "the Negro race...is deemed unsuitable to the climate and requirements of Canada." The order was never called upon, as efforts by immigration officials had already reduced the number of blacks migrating to Canada. The order was cancelled on 5 October 1911, the day before Laurier had completed his term, by Cabinet, which claimed that the Minister of the Interior was not present at the time of approval.[13]

Oliver would also be successful in using his newspaper to lobby for having the Papaschase Cree removed from their Treaty 6 Reserve territory, south of Edmonton.[14]

On August 2, 2021 the Toronto Daily Tribune story, "Edmonton’s Oliver Square changes name after community consultation." It reported, "A member of Parliament and federal minister first elected to office in 1883, Oliver is known for drafting discriminatory legislation, including policies that pushed Indigenous people off their traditional lands."[15]