It has been suggested that this article be merged into Bagpipes. (Discuss) Proposed since July 2022.
The topic of this article may not meet Wikipedia's general notability guideline. Please help to demonstrate the notability of the topic by citing reliable secondary sources that are independent of the topic and provide significant coverage of it beyond a mere trivial mention. If notability cannot be shown, the article is likely to be merged, redirected, or deleted.Find sources: "Gaida" – news · newspapers · books · scholar · JSTOR (July 2022) (Learn how and when to remove this template message)
Balkan/Southeastern Europe bagpipe
This article includes a list of references, related reading or external links, but its sources remain unclear because it lacks inline citations. Please help to improve this article by introducing more precise citations. (June 2012) (Learn how and when to remove this template message) 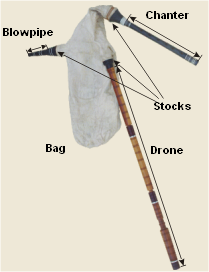 On this Serbian gajde, the chanter is the short gray pipe at the top, while the drone is the long three-section pipe.

Gaida bags are generally of sheep or goat hide. Different regions have different ways of treating the hide. The simplest methods involve just the use of salt, while more complex treatments involve milk, flour, and the removal of fur. The hide is normally turned inside out so that the fur is on the inside of the bag, as this helps with moisture buildup within the bag. The stocks into which the chanters and blowpipe and drone fit are called "glavini" (главини) in Bulgarian. These can be made out of cornel wood or animal horn.

The blow pipe is a short, conical wooden or bone tube in which the player blows to refill the bag. At the end of the blow pipe that is within the bag, there is a small return valve of leather or felt which allows air into the bag via the blow pipe but not back out. In some more primitive gaida there is no flap, but the player blocks returning air with his tongue during breaths.

Each chanter is fitted with a reed made from reed (arundo donax), bamboo, or elder. In regional languages these are variously termed lemellas, Piska, or pisak. A more modern variant for the reed is a combination of a cotton phenolic (Hgw2082) material from which the body of the reed is made and a clarinet reed cut to size in order to fit the body. These type of reeds produce a louder sound and are not so sensitive to humidity and temperature changes.[1]

The chanter (gaidunitza, gaidanitsa, gajdenica, gajdica, zurle) is the pipe on which the melody is played. Different gaida may have a conical bore (Bulgaria), or cylindrical bore (Macedonia and other regions). Popular woods include boxwood (shimshir) cornel wood, plum wood or other fruit wood. A distinctive feature of the gaida's chanter (which it shares with a number of other Eastern European bagpipes) is the "flea-hole" (also known as a mumbler or voicer, marmorka) which is covered by the index finger of the left hand. The flea-hole is smaller than the rest and usually consists of a small tube that is made out of metal or a chicken or duck feather. Uncovering the flea-hole raises any note played by a half step, and it is used in creating the musical ornamentation that gives Balkan music its unique character.

Some types of gaida can have a double bored chanter, such as the Serbian three-voiced gajde. It has eight fingerholes: the top four are covered by the thumb and the first three fingers of the left hand, then the four fingers of the right hand cover the remaining four holes.

The drone (ruchilo, ison, prdaljka, prdak, brčalo) is a long pipe which provides a constant harmony note, and thus has no finger-holes. It is generally a long, three-piece tube with a note much lower than that of the chanter.

Gaidas in the Balkans include, but are not limited to:[2]